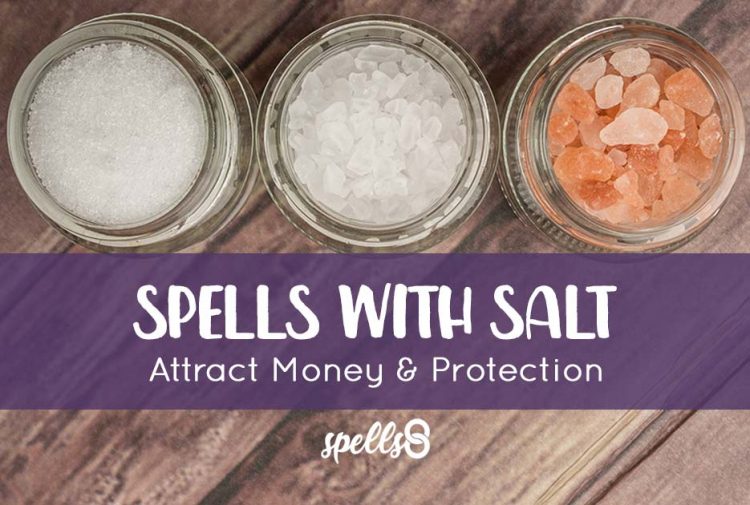 Did you know that salt – a kitchen ingredient that is so abundant today – was a precious mineral in ancient times? It was so prized and scarce that Roman Emperors used it as money to pay their army. That is actually the origin of the word “salary” and also of the word “soldier”. 🧂

In this video, I share 5 easy ways to use salt to protect the home:

Scroll down to find more spells with salt.

For centuries, salt served as a currency, a food preservative, a medicine, and a spiritual cleansing element. Centuries before our era, the Egyptians used salt to mummify their dead and pickle their fish and meat. Salt is an essential element for life, since the body needs it to function properly. It is said that thousands of troops led by Napoleon Bonaparte perished during the invasion of Russia because, in addition to the freezing temperatures, they lacked salt to heal their wounds.

And, of course, salt has an esoteric value as a symbol of purity in religious rituals. In Japan, for example, salt – or “shio” – is considered a purifier. Some Japanese people sprinkle sea salt on their doorsteps after having an unwanted or distasteful guest.

But the Magic powers of salt can also be used to invite positive energies, such as those of wealth and prosperity. And old saying goes:

This is a collection of the best Witchcraft spells with salt from our Book of Shadows. Click the images to read each recipe. Give them a try!

2. The Door Opener: A Spell with Salt for Career Advancement

5. ‘Bad Luck Go Away’: Candle Spell to Remove a Curse

7. ‘Magic Armor’: Wiccan Spell for Good Luck with an Onion

8. Money Rain: A Prayer for St. Expedite with Salt and Candle

What’s the best type of Salt for casting spells?

There are many different types of salt that can be used in spells of Witchcraft. Here are some options:

Sea salt is a type of unrefined salt that is obtained directly from the sea. The water is extracted and placed in large trays where it is left for the sun and the wind to evaporate the liquid naturally.

In this way, sea salt retains minerals such as iron, magnesium, calcium, potassium, manganese, zinc and iodine, which makes it the most effective type of salt for your spells and works of Magic.

This type of salt has a characteristic pink hue and a slightly bitter taste, and it’s usually highly regarded in high-end restaurants. Despite its name, it does not come from the Himalayas, but mainly from Pakistan.

Like sea salt, it also has many more nutrients and healthy trace elements, such as calcium, potassium, magnesium, sulfur oxide, iron, manganese, fluorine, iodine, zinc and chromium, plus it is generally obtained through nonindustrial processes. The only disadvantage can be its higher price.

Scientifically known as hydrated magnesium sulfate, Epsom salt is a very old and effective remedy for different ailments. Magnesium is not easily absorbed through the stomach, but through the skin, making it an ideal option for restoring baths.

Other beneficial uses of Epsom salts are:

Although it is the easiest type of salt to find, it is the least recommended due to the industrial processes that it goes through, causing it to lose most of the minerals found in salt. Also, other components, such as aluminum hydroxide, are added to preserve its texture.