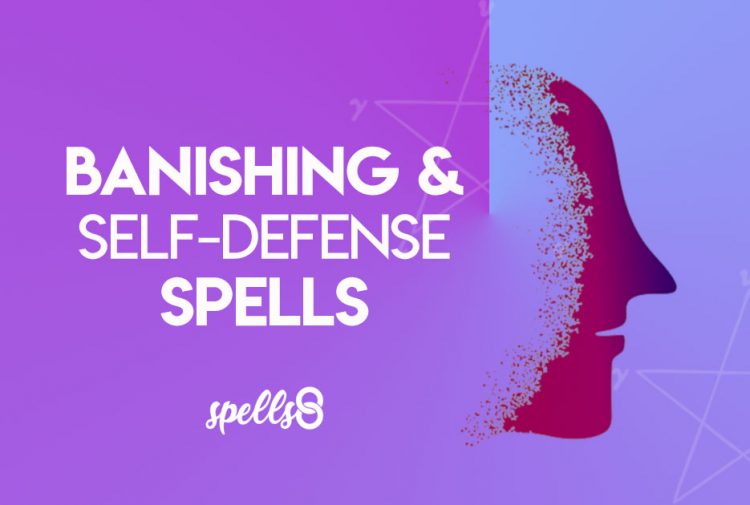 In this article, you’ll find:

Banishing spells are a type of witchcraft that seeks to expel something or send it far away. Traditionally, banishing spells were cast to remove or destroy the influence of unwanted energies or people. While some of these practices might not suitable for Beginners, it’s important for all Witches to understand what banishing means and how it works.

How Banishing Works: A Practical Exercise

Try this visualization exercise to better understand how a spiritual banishing works. This is how to do a banishing spell in its most basic form:

In summary: In order to banish something, first we need to bring it closer, become aware of its presence and have a clear vision of what it is and what it feels like. Banishing is accepting that it is here and deciding that we will let it go, sending it away once and for all.

When to Cast a Banishing Spell

If there’s a feeling, situation, or (in some cases) a person that you would like to send away for good, cast a banishing spell to make it disappear from your life. There are a good number of powerful spells that might work in your favor. To learn more about the ethics of a banishment in witchcraft, scroll down and read more in the frequently asked questions.

In the case you don’t know exactly what it is that is bothering you, try a protection spell instead. Banishing is usually a specific type of protection or self-defense spell for getting rid of negative influences.

How to Cast a Banishing Spell

There are several different ways to cast an effective banishment. The option you choose will vary, depending on how comfortable we are with the different techniques and what we are trying to achieve. Ideally, you will write your own spell according to your specific situation, but if you need a good recipe to get started, there’s a list of suggested spells below.

A popular method of banishing is using the power of Nature’s Elementals.

Write your target (the name of the person or the thing that’s bothering you) on a piece of paper. You can also use a picture or anything that represents what you want to banish, such as a sigil or a personal object. Some witches like to use toilet paper for this banishing spell.

Now, you have a few options:

Get creative and find other ways of doing this ritual banishing. For example, if you’re into Kitchen Witchcraft, tear it up with a kitchen knife or boline first 🔪

You can also add protective elements to your ritual:

Looking for a specific banishing spell chant? Most of these recipes are Wiccan-friendly, which means they intend to harm no one.

Whether you need to remove someone’s energy, get rid of a curse or a spirit, this Wiccan ritual for banishing evil will do the job and keep your home protected.

Make a Witch Bottle and protect your enemies while sending them far away from you. This spell will banish a person, and yes, it can be used to banish neighbors.

Cleanse the home from negativity and evil spirits. Cast this banishing negativity spell with salt to remove and banish negative influences.

Two incense sticks will symbolize the physical act of uncrossing and removing all negative energies, curses and hexes.

Energetic cords can be detrimental to new relationships and often create emotional baggage. This Cut and clear spell is a form of banishment.

Remove bad luck with this Wiccan spell to banish and break all curses. Uses salt, a candle, and a simple chant.

Get rid of unwanted words by freezing them. Banish gossip and lies with a spell to stop gossiping people.

After an aura cleansing bath you will notice a much greater peace of mind. Your body, mind, and spirit will be in harmony.

▶️ I Release You

If you’ve become attached to someone in a way that is not healthy, it’s time to finally set them free and let go.

A lunar journaling page with a simple candle-burning ritual. Banish a bad habit from your life during the Sturgeon Moon or any Full Moon.

Simple banishment spell for jealousy and envy at work using a candle and a traditional Catholic prayer.

More than a revenge spell, this is a ritual for Karmic justice that will act as a protective shield using the Magic of lemon and cloves.

Make a witch bottle to stop bullies in their tracks with vinegar and mint. This could also be used to banish a rival. Use it wisely!

Can I cast these spells if I’m a beginner?

If you’re new to witchcraft and aren’t sure about casting a banishing spell, start here:

A banishing spell is a ritual intended to cast something or someone out of your life. This type of spell prevents it from coming back. If it’s a person, the spell will stop them from seeing you and in some cases even thinking about you. Usually, witches will cast a banishing spell to stop someone from doing harm. Some practitioners also choose banishing spells for spirits, demons and to get rid of negative entities in general. Banishing spells are popular among folk magic circles such as Hoodoo.

What’s the difference between banishing and binding spells?

These two types of spells can be similar but the main difference lies in their purpose: A binding spell will stop somebody from behaving a certain way, limiting their actions. A banishing spell will drive away the person, removing them altogether from the scene.

To bind means to control or limit someone’s or something’s power, while to banish means to expel, sending the person or thing far away. That’s why we cast a banishing spell to get rid of someone, and a binding spell to stop them in their tracks.

▶️ Learn more here: The Many Types of Spells

Are banishing spells safe? Can I cast them if I’m a Wiccan?

Banishing can be used to remove negative energies, unwanted spirits or problematic situations without targeting anyone in particular. Any circumstance that is affecting us negatively could be eliminated with a banishing spell. These shouldn’t interfere with anyone else’s free will and also cause harm to none, thus following the Wiccan Rede.

Can I cast a banishing spell for a person?

If your particular belief system (e.g. Wicca) advises not to work your Magic on a specific person without their permission, then it’s best to not cast a banishing spell on them, no matter what the circumstances are. A good way to get around this rule is to banish the negative beings that surround your life without thinking about anyone in particular. Or you could cast a spell to send them away while wishing them no harm, rather the best of luck in their journey. Ultimately, the Wiccan Rede is an advice, not a prohibition, so it’s up to you to decide what’s best for your situation.

How long do banishing spells take to work?

It will depend on what you’re trying to banish and how deeply rooted or attached is the energy you want to get rid of. As a general rule, the harder to achieve the goal, the longer it will take for the spell to work. Wait for one lunar month – about 29 days – and if you don’t see results, cast the spell again. It’s a good practice to cast banishing spells as often as once a month. Meanwhile, focus on filling the empty space by attracting positive energies. Try meditating, chanting prayers or do daily devotionals to keep a healthy spiritual practice.

What herbs are good to use in banishing spells?

Some of the most popular banishing herbs are: Sage, Black pepper, Cloves, Juniper and Onion. You can also add Cinnamon, Lavender, and Mugwort to bring about extra protective energies.

The best time to do a banishing spell will depend on how you’re feeling. The best banishing spell is the one you cast once all negative emotions have dissipated, with a cool head head and after the heat of anger is gone. This way you won’t regret having cast the spell later on.

Follow this guided meditation as an offering to Bast, the Egyptian cat Goddess of protection.

Hestia is the Roman Goddess of the home and hearth. Offer a glass of wine and this prayer to call upon her blessings.

A powerful force, Ares is the Greek God of war. His aggressive nature makes him not suitable for beginner practitioners.