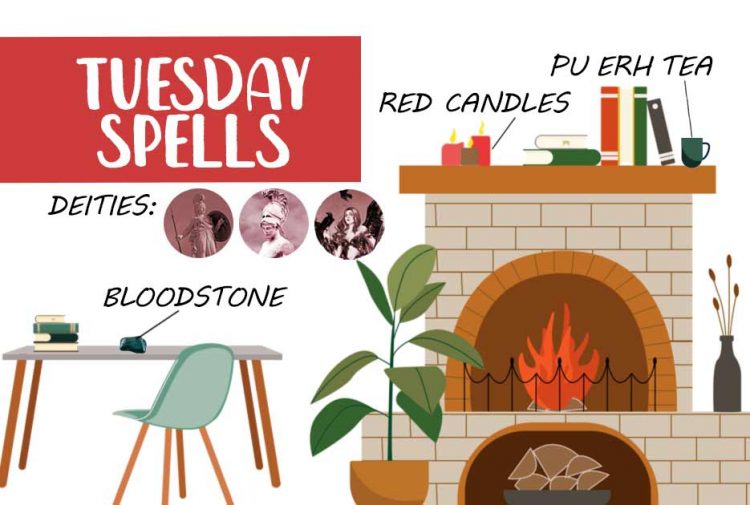 What spells are best done on a Tuesday? This day of the week is auspicious to invite strength and courage. Therefore, if you are making changes in your lifestyle, Tuesday is always a great day to banish a bad habit and to open the door to healthier and more positive activities.

The English word “Tuesday” comes from Old English tiwesdæg, meaning “Tiw’s day.” Tiw was the West Germanic name for Tyr, the Germanic God of War. Tyr is the Norse (North Germanic) name for Tiw, who was associated with the Roman God of war Mars. Today, in Romance languages, Tuesday is the “Day of Mars”, such as in “Mardi”, “Martes,” and “Martedi”.

On this page you’ll find:

Due to the influence that Mars has on this day of the week, Tuesday brings a blast of energy to expend, so it’s natural to feel impulsive or easily-triggered.

What spells to cast on a Tuesday? Scroll down to find a collection of witches’ spells for a Tuesday. Here are some ideas to inspire a Tuesday morning ritual. For a daily ritual, check the Daily Devotional page here.

Red candles are perfect for a Tuesday ritual. Red has a very powerful and lively energy in candle Magic. It is used for strength, emotional and sexual stimulation, vitality, and passionate love.

Tuesdays are ruled by Ares, Morrígan, Mars, Lilith, Tyr, among others.

Drink a cup of Pu Erh Tea, today for a boost of vital strength. This type of tea will keep you alert during the day due to its caffeine contents, but it also has many powerful effects on the body such as protecting from harmful bacteria, fighting inflammation, and eliminating body toxins¹.

The Element Fire is especially exalted on this day, accompany this ritual with a Fire invocation.

Tuesdays, like the color red, are associated with strength and passion. Light a red candle and cast a circle. A day ruled by Mars, Tuesday is also related to physical improvements, exercise, diet, endurance, physical strength. Fight off laziness and receive this extra boost of energy to get the determination to do what you really want today.

A red candle symbolizes passion, courage, and strong emotions. This color connects you with your desires and everything related to new beginnings. Follow this guided meditation to invoke the Element Fire and invite protection, fertility, quick action and power.

There are many different ways to do an uncrossing spell. Almost all cultures have a version of this ritual, which is mainly for removing negative energies. The main ingredient is Bay leaf, a strongly protective herb with commanding aspects.

Here’s a prayer by Magician and poet Aleister Crowley that can be used to consecrate your beverage before spiritual or creative work. Brewing potions and charging them with your intent is a unique experience and a Magical act. Aleister Crowley famously said: “Every intentional act is a Magical act”.

Bath blends are like an immersion in a giant cup of tea and they should be done in the same way: Craft an infusion with the herbs, wait until the water is warm, and rinse from the neck down with the infusion water. After soaking in this stimulating herbal bath, you will emerge renewed and refreshed.

Start the reconnection process with an old friend using a bit of Kitchen Magic. This easy spell will bring back a friendship with a little candle burning ritual. You’ll need 7 cloves, 1 pink or orange candle, Sea salt, Pen and paper.

A great protection spell if you feel you are being bullied by someone. This spell of White Magic will stop the bullies in their tracks, whether it’s in the workplace, school or in your family.

This spell for ending procrastination can be cast without ingredients. It is quick and easy to do, otherwise we will postpone the casting of this very spell! ⚡

A freezer spell against gossip and lies. It works just like a “Shut Mouth spell” but it’s not intended to be targeted at a specific person. Instead working in a more indirect, harmless way. If you aren’t Wiccan, adapt it to suit your own needs.

Spells with honey can fix a broken relationship without harming anyone. All you need for this ritual is the person’s name, a red candle, and a tool to carve on the candle.

Reversing a Hex with Mirror

Did you know that you can use a mirror to reverse a spell cast against you? Learn to create a spiritual barrier to protect you against psychic attacks. This post includes three ways to send a curse back to its originator:

Start this ritual on a full moon night. Also, this is a spell that two people can cast together. In the end, if both of you want to stay together and have the best relationship, consider this ritual as a first step, a ceremony to a new love and sex life that begins now.

If you are dealing with addiction, make sure to get expert help from a specialist. Spiritual ways of breaking bad habits can help as complementary treatment: Cast a Full Moon spell to break a bad habit or explore other ways to banish the behavior.

Conversations from the Infinite Roots Coven: 🔮

Bloodstone has the property of absorbing energy towards its core. By activating it, we raise our self-esteem, self-confidence, and inner strength. It is ruled by the Element Fire and it’s ideal for Tuesdays and Saturdays.

How to use Bloodstone

Use these deity devotionals as part of your Neopagan/Wiccan ritual or adapt them as a Tuesday blessing chant:

Ares is the Olympic god of war. His Roman equivalent is Mars. Light a red candle during this devotional. Invoke Ares’ strength and power to invoke his might against enemies or to destroy powerful energies.

The Morrígan is a figure from Irish mythology. She is mainly associated with war and fate, especially with foretelling doom, death or victory in battle. She is a shape-shifter and thus tends to be associated with a number of symbols and Celtic creatures.

Besides being a Goddess of war, Athena was considered a mentor of heroes and worshiped as patroness of Athens. Chant her prayer to invoke her protection, freedom, and wisdom. This prayer goes well with a yellow candle and some incense: Patchouli, Myrrh, or Sage.

The days and hours of Mars are related to the energy of war and battles, courage, defeating enemies and vexing situations, breaking spells, legal issues and disputes.

Activities that require energy, courage, strength, and action will benefit from this planetary Magic energy. Also, building strength of the mind and body, confidence.

Witchy Things to do on a Tuesday

Tuesday is a good day to strengthen yourself, acquire courage, honesty and courage to resolve conflicts.

These PDF pages come with a transparent background so you can print on any kind of paper you want and add them to your own Book of Shadows. Find more printable grimoire pages.