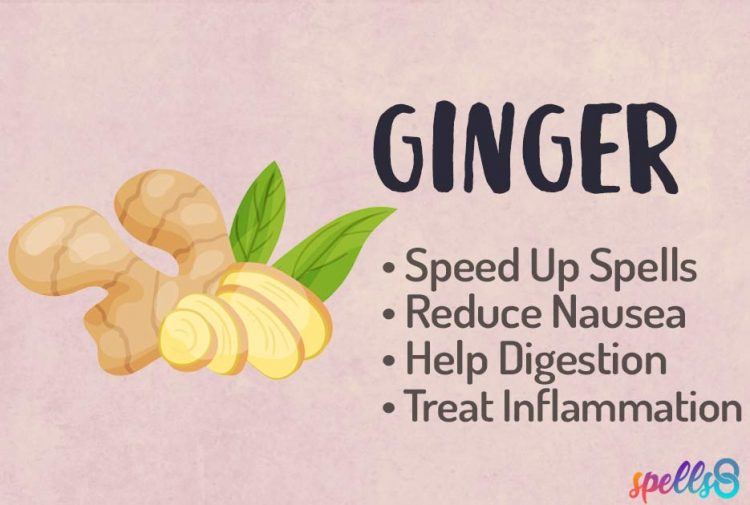 Ginger is a familiar herb, not just in the culinary world but also in natural medicine due to its many benefits and healing properties.

Properties of Ginger in Witchcraft

Due to its connection to the Sun, ginger root is used in potions and spells to improve a person’s health. Just like cinnamon, it is considered a magical catalyst, which “speeds things up.”

Ginger is also said to be a powerful aphrodisiac, mentioned in texts such as the Kama Sutra to enhance sexual relations.

How to Use Ginger in Magick

To attract love, you can dress a candle with ginger powder before a love ritual, or add it to love oils, potions, or mix it with other aphrodisiacs such as cinnamon to increase passion in a relationship.

Ginger tea ☕ is the perfect remedy for common problems such as indigestion, nausea, diarrhea, gas, and it even fights the bacteria that cause gastritis, reflux and ulcers. The Digestive Tonic Tea recipe also uses ginger.

It is said that when chewed, eaten or drunk, ginger helps to enhance a person’s magical energy and personal power to succeed in their goals.

Since ancient times ginger has been used as a spice in cooking and a medicine. Typically people use either fresh or dried root in their dishes. Medicinally, people will often drink tea or take supplements. At one point in history, ginger was almost as valuable as pepper. May believe that Alexander the Great introduced ginger to the West. During the Spice Trade Age, ginger made its way from the East through ancient Greece and on to Europe.

Our word ‘ginger’ derives from the English ‘gingifer’ which came from the Sanskrit word ‘srngaveram’ which means horned body. They aptly named it for the shape of the root. Over 380,000 tons of ginger are produced each year in India which is the most of any nation.

If you are looking to speed up a spell, ginger is your best ally. Associated with the forces of fire and the sun, ginger is one of the best magickal catalysts you can employ. Eaten, drank, or chewed, this root raises a ton of magickal energy for the practitioner. Be ready to harness the energetic properties of ginger and see results faster than you normally would. Many practitioners use ginger to make their plans come to fruition more quickly. Maybe that’s because all the power of fire and passion are compacted into this bumpy root are released.

Studies have shown that ginger can relieve nausea for motion sickness and after cancer treatments in both children and adults. It also helps to alleviate morning sickness in pregnant women. But this isn’t new information. The ancient Chinese, Romans, Greeks, and Arabs all know that ginger had anti-nausea and anti-inflammatory properties. They didn’t have easily available medicines and they needed a solution for motion sickness and morning sickness. And a daily dosage of ginger was their answer!

Gases form in the intestinal tract during digestion. Consuming ginger can help the body break up and expel this digestive gas before it becomes a painful problem. Two enzymes that are important for digestion are trypsin and pancreatic lipase. Ginger works with these enzymes to help aid in digestion. It improves gastric mobility and increases the speed in which the stomach is emptied. Emptying the stomach means less indigestion and dyspepsia and fewer stomach ulcers. On top of all of those benefits, ginger can relieve or prevent constipation by getting the digestive tract moving again.

Ginger contains valuable compounds such as gingerol, shogaol, paradol, and zingerone. Gingerol provides the majority of health benefits because it can inhibit inflammation. Inflammation is a normal immune response, but chronic inflammation is often the cause of many health conditions like cancer, diabetes and heart disease. Ginger has strong anti-inflammatory properties and helps treat many inflammatory conditions such as arthritis and Alzheimer’s.

Avoid ginger if any allergic reactions are experienced such as hives or itching. Decrease consumption if mild side effects such as heartburn, diarrhea, or stomach pain occur with ginger tea. One to three cups of tea per day is recommended for maximum benefits without the risk of side effects.