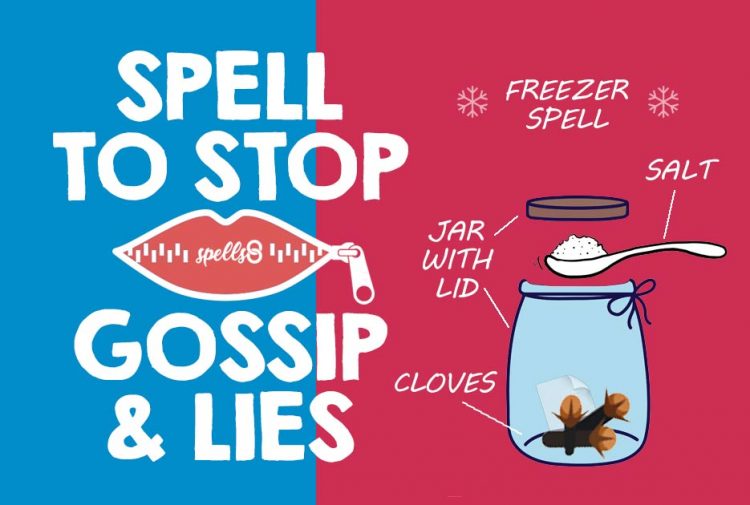 Is someone talking behind your back? This is a spell to stop gossip using the Magic of cloves (Kitchen Magic).

Many of us at some point had a person talk behind our backs, saying not very nice things. Some even make up things about us that are completely false. 🗣

If you live or work with difficult people and want to avoid or stop gossip once and for all, here’s an easy spell to seal the lips of those who talk too much. You can also try casting this spell to stop gossiping if you notice that it’s yourself who is starting or spreading rumors.

How does this spell work?

This easy ritual works almost like a “Shut Mouth spell” (a type of binding Magic), but it’s not intended to be targeted at a specific person. Instead, we will silence enemies in a more indirect, harmless way.

Spell to Stop Gossip and Lies

Freeze someone words with only White Magic. Use this spell to silence an enemy and stop malicious gossip and lies around you.

The point of a freezer spell is to literally freeze their actions. Binding their power with a simple ritual will make their negative influences stop. Witch bottles are powerful so be sure about your intention before you begin. Learn more about different types of spells here.

After sealing the jar, you can light a candle and let a few drops of wax fall on it, sealing the jar even more tightly. Then throw the candle away as you say Thanks.

Use a yellow candle to symbolize healing and strength 💛 If you don’t have one, use a white candle.

This PDF version comes with a transparent background so you can print it on any kind of paper you want and add it to your own Book of Shadows. Log in to download it or find free printable grimoire pages.

How long does it take for this spell to work?

If 15 days have passed and you didn’t notice any improvement, take the jar out of the fridge and let it unfreeze for a few hours. Shake the jar nine times (or for a count of 9 seconds) to activate it with some renewed energy.

What do I do with the jar after the spell?

Once you see results, throw everything away. Or you can instead remove the contents and cleanse the jar thoroughly for its later use. Find an example of cleansing a jar with smoke here.

What’s the best time to cast this freezer spell?

This spell is enhanced by the energy of the Waning Moon phase. 🌖

Protection spells and binding magic are best done on Saturdays and Tuesdays.

From now on, take an attitude of complete indifference and try to avoid gossipy people. Remember: Who gossips to you, will gossip of you. Surround yourself with people who talk about their goals, their visions, their ideas; not about others.