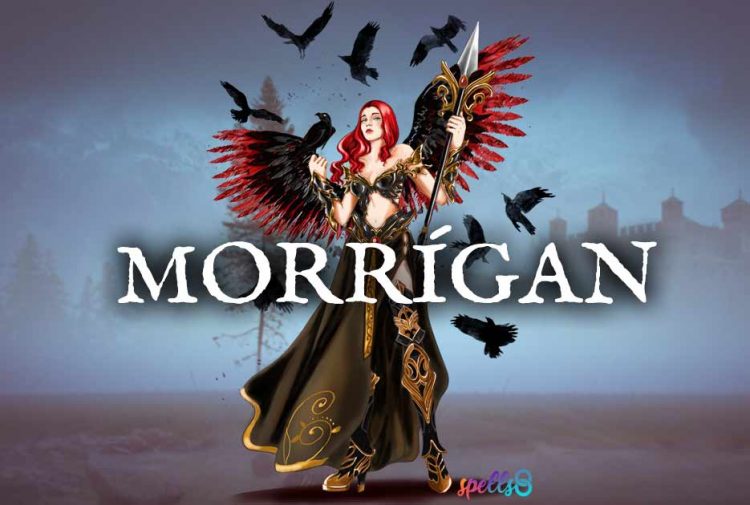 At the heart of the emerald isle is a legendary Goddess that cloaks the battlefield in darkness. The Morrígan is a symbol of feminine strength, wisdom, and power. Though she may be attached to the darkness of death she also is the light in the dreariness of battle. When warriors are in doubt, the Morrígan will appear and lead the way to victory. She is a majestic and ethereal being that resides at the core of Irish mythology.

In this article, we’ll unveil the mystical and enigmatic immortal being that is the Morrígan. Discover her secrets and tap into the Magic of this Irish celestial character.

Working with The Morrígan

The best way to connect with the Morrígan, like any goddess or god, is through her mythology, epithets, and symbols. Here’s a summary of the most important aspects of the Morrígan and how to worship Her in your personal pagan practice.

Myth of The Morrígan

The Morrígan is a mysterious figure in Irish mythology. As the Warrior Queen, she is associated with battle and warfare. Under her influence, a warrior’s enemies quake with fear, and she instills the courage to fight until the very end.

According to Irish folklore, It is said that the Morrígan can predict death and the fate of war. Her prophetic and all-knowing gifts made her exceptionally powerful and she would divulge what she knew to those who were willing to part with it for a price.

She appears in many different forms depending on the story. Being a shapeshifter, she often appeared as a raven or crow, a curvaceous woman, an old witch, or a warrior queen. On the occasion that she would transfigure to a crow, she would fly overhead during battle, frightening everyone as she went.

Sisters and Aspects of The Morrigan

Being the daughter of the goddess Ernmas, The Morrígan together with her sisters Macha and Badb, they form the triad of goddesses of war known as Morrígna, something quite common in Celtic mythology if we take into account that the number three is a symbol of totality and eternity.

When she is referred to as the Triple Goddess it is in reference to these three aspects: Badb the Crow (Maiden), Macha the Great Queen (Mother), and Nemain the Hag (Crone). Keep in mind that the archetype of Maiden, Mother, Crone is also used generally in goddess literature and not necessarily always a reference specifically to Morrígan.

The origin of the Morrígan dates back to the cult of mothers in Celtic mythology. She is present in all wars and warlike confrontations, taking the form of a raven that she flies over in each of the battles, instilling courage in the soldiers and of course giving them strength, anger and rage. She is commonly known for being involved in the Táin Bó Cúailnge, where she is both a helper and a hindrance to the hero Cú Chulainn.

Symbols of The Morrígan

The main symbol of the Morrígan is the crow or raven. This is due to the fact that she chooses this form more than other figures.

The crow is a symbol of conflict, war, and death. It’s skill is wisdom combined with trickery. It also is the protector of sacred records. It also represents her presence on the battlefield and the Morrígan watches over soldiers.

The number 3 is also a common symbol for the Morrígan. This can be attributed to the fact that she comes from a trio of sisters. Sometimes three lines are connected and depict a triple energy that flows from her body, as she is giver and sustainer of life.

The Triskelion and the Triquetra are symbols representing Sacred Triplicities, and the “3” is a sacred number in Celtic mythology and religion. The earth, sea, and sky share a threefold marriage as the three realms of the universe. Another symbol used for this purpose could be the shamrock or three-leaf clover.

The Triple Moon shows different portions of the lunar cycle, with the moon in three phases: waxing moon stands for the Maiden, The full moon represents the Mother, and the waning moon is the Crone. The Morrígan can be understood to be a triple goddess, a shape shifter, a three-part person so this archetype can be used to symbolize her essence.

In addition to being known as the Warrior Queen, the Morrígan goddess is known by many other names. The name Morrígan is Mór-Ríoghain in Modern Irish, and it has been translated as “great queen” or “phantom queen”. Here are some of the titles that the Morrígan is called:

As depicted in the names, there are similarities and consistencies. Many point toward her being a queen and a goddess, her dominant nature and her governance of death are what make her stand out no matter what she is called. The Morrígan may go by different names but she is easily recognizable by those that are familiar with her.

Signs of The Morrígan

It is believed that seeing crows and ravens is a sign of the Morrigan and her presence. However these animals may appear for unrelated reasons as well. Signs of The Morrigan can manifest in many different ways depending on each practitioner as she is not known for being a singular entity or appearing in the same shape every time.

Dreams and visions of the Morrígan while meditating or practicing your Craft should encourage you to do more research on the goddess. Some Pagans may be fearful to approach her because of her associations with death and darkness. Remember to always treat all deities with respect. If you feel called, do not ignore or reject the calling. Learn as much as you can about her, and know that if The Morrigan chooses you, you will know it.

How to Worship The Morrígan

You can worship the Morrígan in a way that feels right to you. However, she is particularly useful when you are doing shadow work. When you call upon her and worship her during your time of self-actualization she can appear. Some people choose to visit graveyards to feel her presence.

There is no one way to worship the Morrígan, as it stands there are no records of how she was praised and celebrated during her time. With this in mind, you can do your rituals and work with her in a way that pleases both you and the goddess.

Ravens and crows are used to represent the Morrígan. In addition to this, anger, vengeance, and self-love are also used to symbolize the goddess. As with other goddesses, there are certain ways that you can symbolize her spirit. Symbolic items connected to the Morrígan can evoke her soul.

Herbs and spices such as clove, sage, and black peppercorns are correspondences of the Morrígan. In addition, plants like holly, weeping willows, and black roses are used to symbolize her.

Scents are also a great way to represent the Morrígan, clove oil, and dragons blood work particularly well, especially when they are combined with the color red and black.

Offerings to The Morrígan

If you wish to create an altar that is dedicated to the Morrígan there are some food and items that you can use as an offering. They are used due to their connection with the goddess and its similarities to the deity’s energy. Here is a list of objects that you can choose from:

In general, red foods are considered an acceptable offering. Place these on your altar and focus on her spirit. The Morrígan will appreciate your offering and lend you her service.

Incense such as Frankincense may be used as an offering to the Morrígan. Since ancient times, the rising smoke of incense offerings was associated with reaching out to the gods and goddesses.

There are many beautiful ways of praying to the Morrígan. Here is one that you can try out for yourself:

“Great Queen, the Morrígan
Hear me, I am your Priest and your Warrior,
Protect me from harm, be it by intent or by ignorance,
In the face of life’s trials and joys,
May I be ever steady: calm in mind, body, and emotion,
May I be centered, present, embodied,
My mind like water; clinging to no thing and untroubled,
May I act decisively, truth and wisdom as my guideposts,
May my actions and words move from a place of honor, wisdom, compassion, and love,
May I know when to cut, and when to be cut
Clothe me in guile and cunning;
That I may move with suppleness and resiliency between the worlds.”

If you’re curious about the legend that is the Morrígan there are several insightful books that will help you to gain a deeper insight into the pagan Goddess.