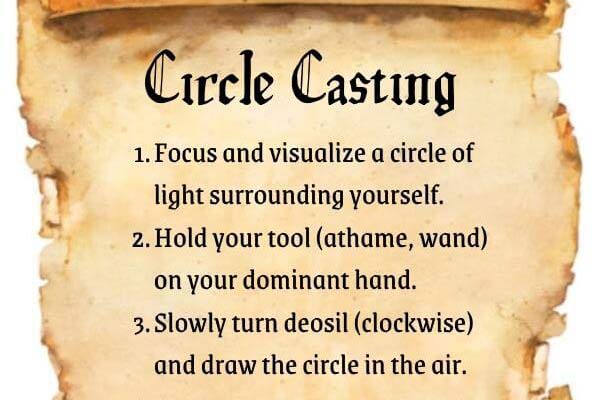 Casting a circle is one of the fundamental skills of witches. Before you begin practicing magick, it is important to know how to cast a circle for a spell. While it is possible to cast a circle without tools, the process still requires that your energies are properly aligned.

🧙 Tip for Beginners: Never cast a circle without taking time to think about the art and magick behind your actions. Whether this is your first introduction to casting circles or you’ve been doing it for years, let’s explore how to properly cast a circle.

What is a Magick Circle?

A circle is a temporary space for practicing magick or doing a ritual. According to Scott Cunningham, “the circle defines the ritual area, holds in personal power, shuts out distracting energies and creates the proper atmosphere for the rites.”

The word “circle” is not really accurate because it really represents a “sphere” of energy. The circle marks the ring where the sphere touches the earth (or the floor).

Some witches think of a circle as a sacred inner temple for casting spells. You can cast a circle anywhere – inside your home, outside in the woods, on the beach, in your bathroom, you get the point. The ability to cast a circle means you can create sacred space anywhere you are. And the circle can be as big or as small as you need it for your own magickal purposes.

Just like a circle of salt, chalk, or stones, a circle of energy can act as protective boundary that you create with your own psychic abilities. While it exists only in the physical realm, it also encompasses the spiritual realms and exists on the astral planes. You can’t see or touch this circle. It’s an invisible protective enclosure that can’t be detected with any of the senses.

When do you cast a circle?

Typically, practitioners of magick will cast a circle at the beginning of a ritual. Depending on how your coven is structured, it may be done by the High Priestess or Priest, or it could be a coven member. If you are a solitary practitioner, then you would be the one to cast the circle.

How To Video:
Cast a Circle with the Four Quarters

Call the elemental energies of the four corners, cast your spell and finally release the quarters.

Do you need to cast a circle for every spell?

You don’t need to cast a circle every time you cast a spell. The circle will give you confidence and a place to practice without distractions, but it’s not always necessary. Think of it as a “safe space”, your training wheels. Eventually you don’t really need it and it’s also good for you to experiment without it.

Cast a circle if you feel the work you’re about to do will raise a lot of energy. The circle helps to contain the energy so it doesn’t drift off in all directions. Also if you want to feel safe and protected, simply visualize a sphere where nothing can come in. If you’re just praying to your deities, you don’t need any protection.

Add it to your Book of Shadows!

Casting a Circle in Wicca ⛤

The magick circle is cast to contain all that is part of the ritual or working, you and the altar. Some practitioners may use it to clear the area of wandering energies, hence the name “circle of protection” but it is typically used for raising energy and then releasing that energy for a magical purpose.

Different Wiccans will have different approaches to casting circles. In general, the circle is a sacred space that is, metaphysically speaking, between realms. It can be a sphere, a bubble, which encases the ritual area above and below, not just around the perimeter.

The circle can be physically marked but it is mostly a sphere of energy. Gardner’s circles were traditionally 9 foot diameter but depending on whether you are working alone or with others, it can be bigger or smaller.

How do you cast a Circle

There is no hard-and-fast rule on how to cast a circle. Some people have simple methods for casting a circle in which they simply visualize it, while others perform a full-blown ritual with a salt circle and all their ritual tools.

Remember that the circle is a working space and the Wiccan altar is a work bench. The altar can be placed in the center of the circle or to the side (for example facing North).

Words for Casting a Circle

“I am protected by a sacred circle, in perfect love and perfect trust.”

Chants for casting a circle range from the simple:

“The circle is cast, so mote it be”

“I ask the Goddess and God to bless this circle so that I may be protected during my magickal working in this space, so mote it be”

…to the more elaborate. Elaborate incantations can include paying homage to each cardinal direction or reciting a list of deities or angels to protect the magickal space.

An example of inviting the Goddess to your circle would be by chanting to Diana, or reciting Doreen Valiente’s poem The Charge of the Goddess.

Or create your own way of calling Her, like a prayer, a symbol, or a sound. She is listening!

Not every pagan tradition casts a circle. In fact, Norse, Egyptian, and many folk magick practitioners don’t use them. There is no pagan rule that says you must cast a circle to cast a spell.

Casting a circle is still a valid practice if you are an eclectic pagan and you believe in the power of magic circles for concentrating your energy. Ultimately, to cast or not to cast a circle, the choice is up to you.

Follow this guided meditation to cast a circle with your mind:

Can I leave the circle?

This depends entirely on the practitioner or coven. According to Raymond Buckland, “At no time during the working of magick should the Circle be broken. At other times it is possible to leave the Circle and return, though this should always be done with care, and no more than absolutely necessary.”

How to “cut a door” in the circle

Buckland continues: “With athame in hand, standing in the east, make a motion as though cutting across the line of the Circle; first on your right and then on your left. You may then walk out of the Circle, between the lines. If you like, you can imagine that you have cut a gateway or doorway, in the east, through which you pass.“

Where does the circle go when you are done?

Optionally, ring a bell, extinguish the candles if you have used any, recoil the cord, or pick up the stones, salt, etc.

What if you forget to take a circle down?

If you forget to take a circle down, it isn’t the end of the world. But if you took the time to create a formal energy barrier to protect you, it’s good form to release it and not forget. Over time the circle will dissipate on its own.

Why do you need to cast a circle?

For starters, there are distractions from the mundane world like your cat or phone ringing. Casting a circle delineates a space that is no longer rooted in the physical world. It separates itself from time and space by creating a sacred area to block out any disruptive influences and protect you if you may be psychically vulnerable during a spell or ritual.

But the circle isn’t just for the practioner. It’s also for the deities that are called into the circle. Think about how much energy is out there bouncing around in the universe. All this energy is constantly moving in one direction or another.

The circle captures the energy and allow it to remain swirling in a single location for a period of time. Encasing this energy allows a deity the ability to enter the circle with ease and remain there without being swept away. Plus, it gives you, as the practitioner, more ability to concentrate the energy into a single focus thus using the power and energy of the deity to the best of your ability.

Many Witches don’t cast circles at all so don’t feel like you must do it every time. Others only do it when working in a group, for example.

Some staunch practitioners may say that you always have to cast a circle. If you’re a beginner, find what feels right to you. Just remember, if you’re going to cast a circle, be in the present moment and make sure to fully visualize its power and properties.