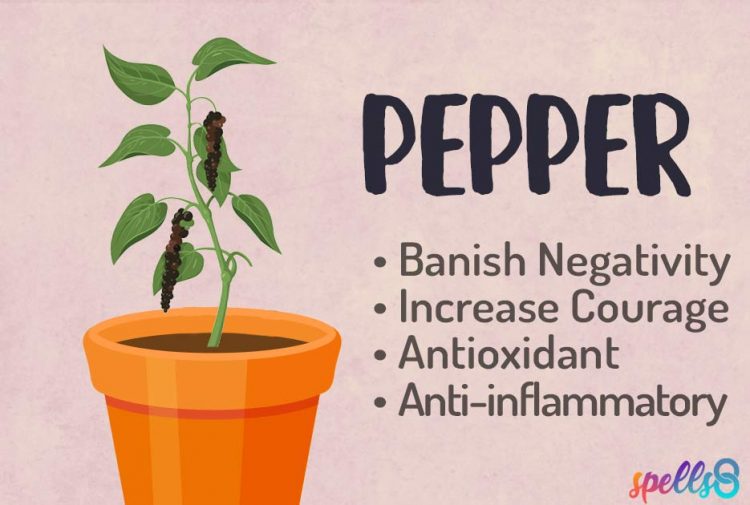 In Roman times, pepper became the most important spice. The cities of Alexandria, Genoa and Venice owe their economic success to pepper. It was one of the first items marketed in Asia and Europe.

In the Middle Ages, Europeans used to use pepper to pay rent, dowries, and taxes, and Shakespeare mentions pepper in his plays. The need for pepper inspired the exploration and trade of Spanish spices in the 15th century.

Uses of Pepper in Witchcraft

Black pepper is spicy, earthy, and incredibly solid. It has an uncanny ability to create strength and stamina to express ourselves freely. Pepper helps us builds our own inner voice and allows us to remain calm and centered.

Pepper can be used magickally in different ways, the most popular being protection. When used for this purpose, pepper can be spread over an area to protect it from a variety of things. In addition to spreading and the pepper can be burned (although that may not be entirely pleasant) to use it as incense.

Mix pepper with old nails and put it in a Witch Bottle for an effective protection spell on your property or home. In this way, pepper can be used to dispel unwanted entities, negative energy, and unwanted visitors. It will also help put a stop to gossip and envy of other people.

Try these potion recipes with pepper! The following are simple spells where pepper can be added to strengthen or increase their power:

From the Spells8 Forum: Peppers in Witchcraft and Apothecary

Since 2000 BCE people have been using pepper for both culinary and spiritual purposes. Native to South Asia and Southeast Asia, pepper is now the most common spice in the world. Most people don’t realize that the peppercorn is actually the fruit of the plant. Depending upon when it is harvested, processed, and dried, the fruit can produce black, green, or white peppercorns.

The ancient Greeks predominantly used pepper in combination with other spices in their wine and rarely, if ever used it on food. It was generally only put on food if it was deemed medically necessary. Despite their limited use, pepper is the one spice that has had the most impact on shaping our world.

During the Middle Ages and into the Renaissance, pepper was so highly valued by Europeans that it was used as a currency. It was given as gifts, used to pay rent, offered as a dowry or bribe, and even used to pay outstanding taxes! When Columbus set off on his expedition, he was actually looking for pepper plants as well as a quick route to get pepper back to Europe. While pepper isn’t as coveted today as it has been in the past, it does have a permanent place on almost every table in the world!

Pepper helps practitioners banish negativity with its spicy, pungent odor and flavor. Next time you are clearing your home or property of any unwanted negative energy, mix a little pepper with paprika and chili powder and place it around the boundary of your home. If you have an unwanted visitor you don’t want to return, sprinkle a mixture of salt and pepper after they leave.

Carry peppercorns with you to ward off petty jealousy. Or place the peppercorns in a protection sachet, bottle, or amulet so they can dispel any jealous thoughts or feelings you may be having.

As the spice of life, pepper can help invigorate your own personal and spiritual work. Need a boost of inner strength? Carry a personal amulet or pouch with peppercorns to give you the confidence you need when you need it.

When you exercise or digest food, your body naturally produces free radicals. These free radicals are unstable molecules that damage cells and excessive exposure can lead to major health problems such as cancer and heart disease. Black pepper contains piperine which has potent antioxidant properties that prevent the damaging effects of free radicals.

Inflammation is thought to be a factor in many chronic health problems including diabetes, arthritis, and cancer. Piperine helps to fight inflammation by reducing joint and airway swelling.

Improved brain function has occurred in various animal studies with piperine. These studies suggest that degenerative brain conditions can be reduced and postponed. Piperine helps to improve the memory as well as decrease the formation of plaques that damage the brain.