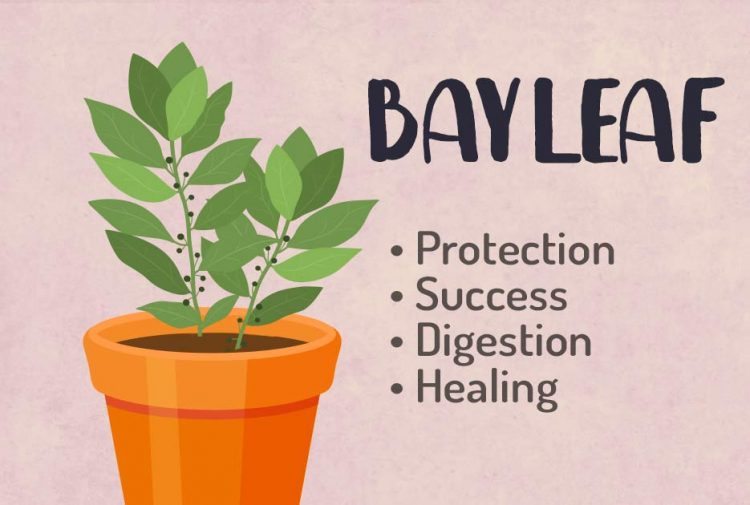 Bay leaf, or laurel, is a noble and protective tree, with a strong energy that attracts luck, success, and material and spiritual fulfillment. Its masculine energy radiates glory and honor. Bay leaves are a symbol of divine inspiration and victory. Its rich perfume was consecrated to the Ancient Greek Gods, mainly to Apollo (God of the arts, poetry, and truth).

This herb helps us connect with our intellectual and spiritual sides; it awakens our instinct and our Inner Magic.

In Magic, the bay leaf is used to attract good fortune, and is used in spells for good luck, wealth and love; as well as in rituals of purification and psychic perception.

Uses of the Bay Leaf in Witchcraft

Bay leaves (Laurus nobilis) are part of the laurel family and are also known by the names Daphne, Grecian Laurel, Sweet Bay, and Laurier d’Apollon. The laurel family is most commonly found in America and Asia and consists of evergreen trees and shrubs. Unlike other laurels, bay leaves originate near the Mediterranean. This small tree full of nutrient rich leaves has been part of the healing and culinary world for thousands of years.

The bay plant has been considered sacred to witches for hundreds of years due to its incredible healing powers, and has traditionally been used as a powerful negative-magic repellent, thus providing protection to the spell caster from being cheated, harmed, tricked, or cursed by others with ill intentions. Burning the leaves will protect and exorcise harmful energies. In the middle ages, to protect people from the plague, bay leaves were used in various spells and charms. While in voodoo, a bag with bay leaves is worn to protect the wearer from enemies as well as ward off the evil eye.

The bay leaf was sacred to Apollo, the Greco-Roman god of healing.  The ancient Greek myths tell of Apollo falling desperately in love with the nymph Daphne, daughter of Gaia and Peneus. Daphne did not embrace Apollo’s love, because she vowed to remain unmarried. When Apollo began to pursue her, she asked her father for help. Her father turned her into a bay tree. Apollo was devastated and declared if he was unable to marry Daphne, he would honor her tree forever. In her honor, he gently harvested the tree’s leaves to decorate his harp and wear as a crown.  The bay leaf became a symbol of devotion, success, and victory. Wear or carry bay leaves to ensure success or victory in any endeavor.

Bay leaves work as both a diuretic to stimulate urination and as an emetic to help stimulate vomiting. They directly impact the gastrointestinal system. Not only do bay leaves settle an upset stomach, but they reduce the effects of irritable bowel syndrome and reduce the symptoms of Celiac disease. Unique enzymes found in bay leaves stimulate the digestion of complex proteins which helps to facilitate better nutrient absorption and more efficient digestion of food. Take them in a capsule or tea to help aid digestion.

Millions of dollars have been spent on aggressively seeking new cures for breast cancer. A recent study1 found that bay leaf extract might be a possible cure as it aids in apoptosis, or controlled cell death.

Placing bay leaves on a wound is an age-old tradition but… is there any scientific proof for this practice? A group of researchers2 recently concluded that the extract from the leaf can reduce inflammation around the wound.

Bay leaf should never be eaten whole as it cannot be digested. Avoid use if pregnant or breast-feeding. Do not take if diabetic. Should not be taken during or after surgery.

While a standard ingredient in many soups and stews, bay leaves have a rich and deep history. Not only are bay leaves excellent protectors for your physical health, but they are also excellent at protecting your magical health from negative influences.