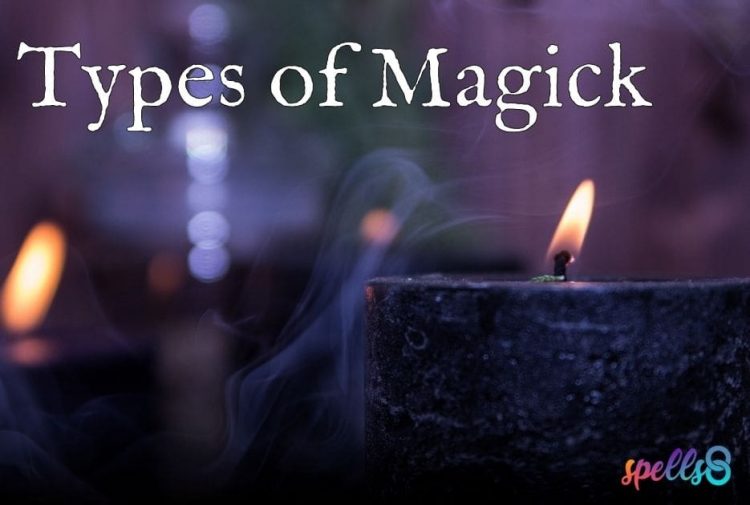 In the ever-growing landscape of occult practices, some practitioners may choose to distinguish themselves from the varied brew of modern witchcraft that exists today.

That said, many of us practice eclectic witchcraft, which may be a combination of any of these paths or influences. However you choose to practice is perfectly valid – this guide is only meant to highlight the different branches of occultism practiced throughout history.

There are many different types of magickal practices throughout the world. Each one has its own set of rules, customs, traditions, and practices. You might find one that fits your style or none! That’s okay, too.

Much like today’s Catholicism, ceremonial magick relies heavily on rites and ceremonies. It is often performed as deity work by those seeking enlightenment, divine grace, or purification.

This branch of magickal practice was once reserved for the wealthy or well-connected. The rites are often documented, and ceremonial practitioners are highly-trained to perform a ritual with a certain degree of accuracy.

In response to ceremonial magick, there is also a large umbrella of folk practices. Folk magick can be found in all corners of the world, and each branch of folk magick varies greatly from the next depending on the background of its practitioners.

It can be more difficult to find resources on folk magick because many of its practices are passed down by word of mouth. This is because folk practitioners often originated from smaller villages and may have been individuals from the lower-class without the ability to document their rituals at the time of conception.

This doesn’t take away from the power and respect commanded by folk magicians, of course. These practices often fall under the category of traditional witchcraft and are some of the most ancient forms of magick.

Luckily, in the modern age, we are witnessing a strong revival of traditional folk magicks aided by the accessibility of the internet, granting new power to these ancient practices.

Much like the universe, cosmic magick is unknowably vast. Practiced by astrologers and lunar witches, planetary magic comes in all shapes and sizes.

A cosmic magician may perform magical workings while planets are in specific signs to enhance rituals, trace the journey of heavenly bodies in the sky, or invoke the energy of cosmic entities in their work.

Some also view astrology work as a sort of mindfulness practice, performing self-work in the areas of importance as the signs and houses demand. There are many energies at work that you can apply to your practice in planetary magic.

A lunar magician works with the phases and influences of the moon. Working with the moon phases is great for those who want to harness the moon’s energy for projects and personal goals.

As the moon passes through each phase, it significantly lends its energy to a phase one might take in their personal journey. By working in tune with these phases, we can amplify our intention to reach our goals and take steps in a more calculated manner.

This practitioner may also choose to perform rituals only at night or while the moon is visible in the sky, work with the signs as the moon passes through them, or utilize moon water in their spells and workings.

Chaos magick focuses heavily on forced manifestation through willpower. Many chaos magicians do this through a meditative state called gnosis. From this state, you can utilize your altered consciousness to manipulate the energy of the world around you, manifesting in real-world results.

Another commonly-used tool of the chaos magician, a sigil is a physical representation of an intention. A practitioner may use an existing sigil, but many choose to create their own.

Sigils may be crafted using the individual letters of your intention or by tracing the letters of your intention on an alphabet grid. When creating a sigil using a written intention, many practitioners choose to omit vowels and repeated letters before applying that statement to a predetermined letter grid. Others may choose to create an artistic symbol just by following their intuition.

Once a sigil is created, it can be charged, placed, and simply forgotten. This may seem redundant at first, but by forgetting your sigil, it manifests in your subconscious and continues to do your workings from within.

Commonly found dutifully pining away in gardens and greenhouses, practitioners of green magick have an affinity for plants and the outside world. A green witch may create herbal remedies or use plants and herbs as spell components. Gardening, pruning, and spending time outside are key grounding activities in green magick.

Despite being a solitary practitioner more often than not, the hedgewitch was acclaimed due to her significance to the community. The witch’s quarters would often be located just on the outskirts of the village near the hedgerows. Occupying this liminal space between the village and the wilds just outside, the hedgewitch’s duties involved healing the people of the known world with herbs collected from the feared world beyond.

In modern practice, hedgewitches still occupy liminal spaces, walking the worlds between dreams and reality, engaging in astral travel and lucid dreaming, and performing spiritual work. In the way they cross the veil to the unknown wilds, these practitioners also cross through to the other plane.

Artistic magick encompasses a wide variety of creative paths. It may be as simple as incorporating a little magick into your everyday creative process, like enchanting your tools and brushes, making your own paints, or using colors to impact your mood. Sigils and servitors can be crafted with art magic, or a practitioner may use magick to create an art piece that delivers a powerful message to any who lay eyes on it.

See Also: Witchcraft in your Art

The act of divination involves gleaning knowledge from supernatural sources. A practitioner may use divination to speak with spirits, deities, or other entities. There are many forms of divination, such as scrying with a crystal ball, black mirror, or pendulum, and cartomancy (such as tarot or oracle cards). Depending upon the practitioner, divination may or may not be considered a magickal practice but a religious one such as a form of prayer.

Wait – what’s a tag-lock? A tag-lock is an item that ties your spell to a person through its association with that person. This can be an article of clothing, a lock of hair, a piece of paper with a person’s name written on it, or an item that your spell’s intended recipient owns.

Which Witch is Which?

No matter your spiritual path, you are welcome to practice one or many types of magic. Just be sure to always be respectful of closed practices, and to do your research to ensure you are honoring the traditions and cultures from which these practices were born.

7 Signs You Are a Water Witch

Do you like to hang out close to bodies of water such as rivers, lakes, or oceans? Or do you have a strong connection to the Element of Water? Well, you are not alone.

How Many Types of Witches Are There?

Many beginner witches seem confused about this topic, asking “What type of witch am I?” Let’s go to an academically reviewed source – Drawing Down the Moon by Margot Adler.

Is Traditional Witchcraft Right for You?

Traditional witchcraft is a non-denominational form of Magical practice that can manifest in a variety of ways. The practices, rituals, and traditions of a self-identified traditional Witch are likely to differ greatly from another.