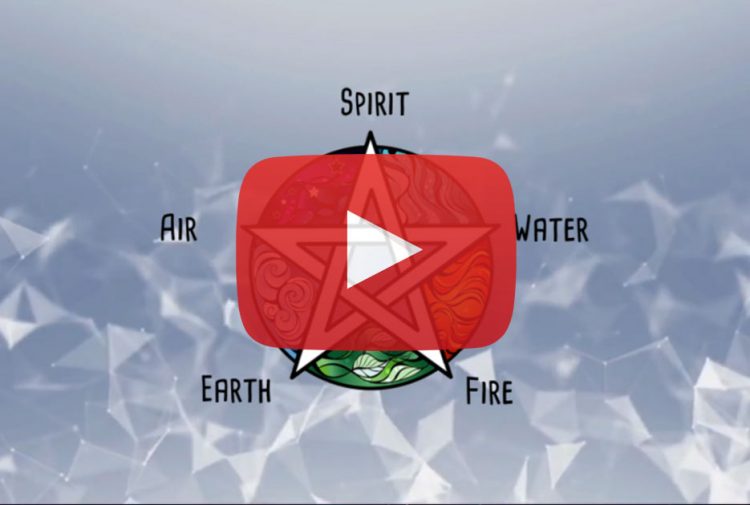 Not all Wiccans use the same correspondences for the elements, but this is an overview of the generally accepted 5 Elementals of Wiccan Wisdom.

What are the 5 elements of Wicca? Air, Earth, Fire, Water and Spirit. In this 6-minute long video, you will learn the basic Elementals, their correspondences and directions for its use in Magic and Witchcraft.

Most Wiccan traditions work with five elements during rituals: earth, air, fire, water, and spirit. Each of these five elements is a fundamental building block of the universe and symbolically represents the various stages or forms of matter. Each of these elements also has its own qualities and correspondences.

Calling the quarters can be simple or it can be dramatic, poetic, and complex. It can work in a theme such as the human body if it is a ritual for healing or it can be written to target a specific pantheon of gods and goddess. The possibilities are endless!

Let’s explore the characteristics and correspondences of each element.

The earth is our planetary home. It is where all life abounds and is the source of our sustenance. The natural cycles of the earth are growth, harvest, decay, and regeneration. A myriad of topographical landscapes are found all over the earth complete with diverse flora and fauna. But the earth is not simply the living things that inhabit it. The earth is comprised of deep caves, reaching mountains, and dense forests.

The element of earth is associated with the cardinal direction north. It corresponds to the magickal tool of the pentacle. The colors that represent earth most often are green and brown. The earth is closely aligned to the goddess as they are both fertile and stable. The element of earth is solid and full of endurance as it continues through the cycles of the seasons year after year.

The air fills our lungs as we inhale a deep rejuvenating breath. Air is all around us, but invisible to our eye. The air is felt through the breath, the skin, and the view of the swaying trees. It is movement in the purest form as the wind travels around the globe spreading seeds for life, changing the landscape of the earth, and allowing the creatures of the sky to move amongst us. The air holds clouds, birds, and the stars above us.

The element of air is associated with the cardinal direction east. It corresponds to the magickal tool of the wand. The colors that represent air most often are yellow and white. The air is closely aligned to the soul as it is essential for life. The element of air is related to communication, wisdom, and mental powers.

Fire drives away the darkness. It warms our cold bones and stirs the passions inside of us. Fire does not have its own physical existence like the other elements. It comes into being as light and heat in a powerful and dramatic fashion and then once it has consumed an object, it disappears back into another realm. Fire is often linked to the masculine energies as it is protective. Fire is depicted in volcanoes, the phoenix, and transformations.

The element of fire is associated with the cardinal direction south. It corresponds to the magickal tool of the athame. The colors that represent fire most often are red and orange. Fire is closely aligned to transformation and heat as it changes the physical form of any object it encounters. It is used most often as a metaphor for carnal desires as fire in our bodies is linked to passions, lust, and sex. The element of fire is related to strength, activity, and the innate life-force inside of all of us.

Humans are predominantly comprised of water. Water flows into and through our bodies and is necessary for our continued existence. We are suspended in a life giving liquid while growing inside of the womb. Water falls gently from the sky to nourish the earth and help the flora to grow and thrive. The water embraces sea creatures, an unexplored underwater landscape, and falls from the sky above to feed the earth.

This fifth element is not recognized by all Wiccan paths. It has been known as Akasha or Aether. It is a bridge that connects the spiritual and physical soul. It is often represented as white or purple. It is the crown chakra in eastern religious practices and the halo in Abrahamic traditions. Spirit is the element called forth in ritual as it is the force that connects us to the magickal realm.

While the five elements are linked with the beauty of the self and the natural world, each element also contains a darker component. It is through these components that change comes in drastic forms. The earth shakes with tremors, the water rises in tsunamis, the air rises as tornadoes, and fires rage out of control. Each element should be respected for its ability to exist in all forms and treated accordingly.

Take time to work with the powers of each element in your practice. As you journey down the pagan path, usually an element will feel natural to your own magickal working. Embrace it and relish in working with your element, but don’t forget that they all work in tandem with one another!

The next topic is Introduction to Herbal Witchcraft. In tomorrow’s lesson, we’ll learn how to create a Wiccan altar using these Elemental correspondences.