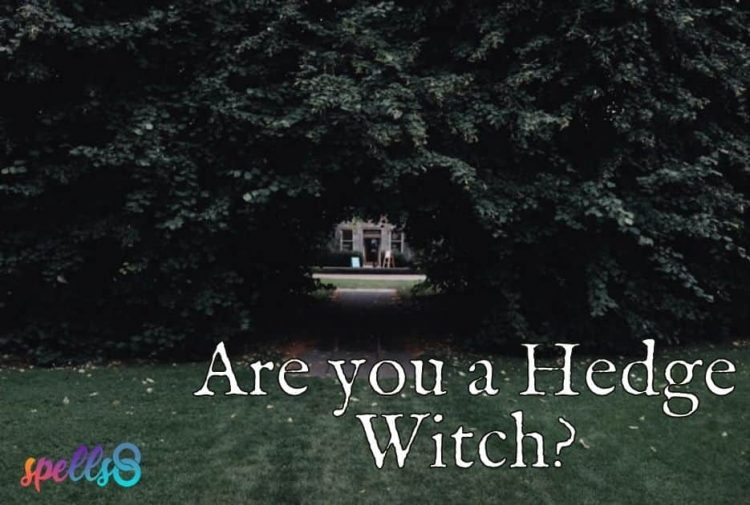 The One Who Lives At The Border

Have you ever heard of the wild man that lived at the edge of the town? The one that could offer solutions to any of your problems? What about the seer that lived at the edge of the forest? The one who seemingly knew what was going to happen before it happened? Throughout literature and history, witches have chosen to practice their rituals while living at the borders and edges of the civilized world. From there, they chose to offer their services, both hexing and healing.

While their homes were rooted at the physical border, it only represented a larger truth about their practice. Their witchcraft was an ode to tiptoeing the borders of the metaphysical world and the material world. The old wise woman you heard about not only lived at the outskirts of town but also lived at the outskirts of the spiritual world. Her life would be spent moving between them.

The Hedge Of Their Practice

To put it in simple words, a hedge witch is one who can cross the hedges present in the world through their practices. They are able to move through the veil and interact with the spirit world and then come back to the material world. In fact, this ability of crossing is their most important one. This is often why you will hear the phrase “riding the hedge” or “flying the hedge” which is often shown in images of witches with brooms crossing over the sky.

By riding the hedge, these witches move through the veil between the two worlds. In some practices this is done to attend a great feast with other spirits, deities, familiars, and witches. These journeys to the spirit world involve the use of gateways or doors, trance, and journeying. The reasons a witch might ride the hedge vary greatly. Some employ familiars to act as guards as they cross. Some witches ride the hedge to gain knowledge that is only accessible from the spirit world and the spirits that reside there.

The Difference Of The Main Magick

People often mistake hedge witches for green witches or kitchen witches. A green or kitchen witch is often known for working with nature, their home, and their surroundings. However, an important distinction is that for a hedge witch, spirit work and work done across the hedge is the main focus of their practice.

Consequently, the hedge witch travels to the other world for their journey and practices. In hedgecraft, the witch leaves the physical world on a spirit flight through a gateway or door into the spirit world. It is highly recommended to travel with a familiar spirit during this process to guide and protect you. By moving to the spirit world, one can seek healing, answers from spirits, protection, knowledge, and even space to rest away from the stresses of the material world. They hold the power to become healers and seers as they work with the astral world to perform their magick.

They Know Their Way

Hedge witches are fiercely independent. They are known to follow their instinct before the rituals of any practice. Some people are known to follow their heritage while others build on an entirely new practice. It is important to note that spirit flight has a long history in many European traditions of folk magick. These systems of magick have structure but the witch is generally able to intuitively cross the hedge in whatever way works for them.

In fact, hedge witches are generally solitary witches. They don’t usually follow a coven or tradition structure, though that does not mean they can’t or won’t. For the hedge witch, their practice generally centers on the connections they have with their familiar and the spirits they meet on their journeys across the hedge.

Moreover, hedge witches are known to create astral spaces for themselves in the otherworld where they spend time while also holding space in the material world. These can often be grounding or safety points for them to come back to as they explore the spirit world. They also learn to protect themselves and cleanse themselves as they move through different realms.

In the end, their ability to travel through unseen realities of space offers them many possibilities, routes, and answers through their psychic abilities. They are known to move through worlds through astral projection, trances, or altered states of consciousness. Some will also work with dreamwork or sigils, meditations, or crystals to help ground them when they cross the hedge.

See also: The Inner Temple for Casting Spells without Tools

Being a hedge witch can be intense and unpredictable. It is advised for one to be confident in their skills before attempting to practice such witchcraft. It is also heavily advised to contact a familiar spirit that can travel with you. This familiar is then responsible for keeping you safe and guiding you. Just because it is the spirit world doesn’t mean it is free of dangers. One has to have patience as they move through different parts of their learning through trial and error.

On the other hand, being open to experimenting has allowed hedge witches over decades to have their own unique practices to cross realms while staying rooted in the material world. Even more so, with time, one may come to have new favorite spirits, ancestors, or guides that they would want to work with in terms of healing and foresight. There will always be realms that will yet have to be explored!

Trust Is The Key

The journey to becoming a hedge witch is to trust your abilities, your instincts, and to often push your own boundaries to see beyond the veil. The practice of seeing beyond the veil holds the knowledge between the apparent and the unseen, but also all the things in life that are more below the surface. It is embarking on the journey of understanding the layers to the world around us and accessing the knowledge present in our ancestral guides.

A hedge witch can be fiercely independent but everyone has their own path. Keep learning on your journey and find a direction that suits you.

What to Put on an Ancestor Altar?

The ancestor altar is a sacred place, a space of coexistence between the living and the dead. Spanning thousands of years and across many traditions, people have called upon our ancestors for guidance, protection, and spiritual empowerment.

Get ideas for your ancestor altar!

How to Use Bones in Witchcraft

The ancestor altar is a sacred place, a space of Bone magick is one of the oldest and most primal forms of magick. Derived from the raw power of nature, bone magick taps into the earth’s currents to create change in the world. Though it is a simple form of magick, bone magick can be incredibly powerful if used correctly.

Phoenix Dawn asked for tips on astral travel in the forum. Our coven members did not disappoint! From videos, interviews, and personal experience, get tips directly from witches just like you! Learn how you can travel the astral plane for witchcraft, spirit communication, and more.

Find the tips on our forum!