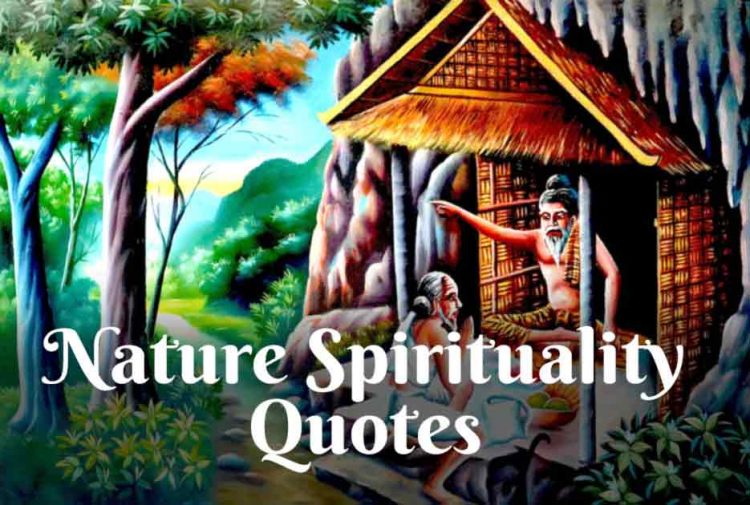 Nature Spirituality is any spiritual belief that involves working with the divine as immanent in nature. Many nature religions are polytheistic, animistic, and/or pantheistic. In this post, we will explore the origins of modern-day nature spirituality, also known as Nature-based Spirituality.

Nature spirituality is different from revealed spirituality in the same way that philosophy and theology are different. While revealed religion comes from the revealing or disclosing of some form of truth or knowledge communicated by a deity, nature religions exist without reference to or reliance upon any supposed special or miraculous revelation.

Most often nature religions include the traditional worship practices of native people from the Americas, Africa, Asia, Australia, Europe, and Polynesia.

Native American religions are often said to hold nature sacred or to be place-based spiritualities.

In contrast, the cosmology and theology of Christianity in general, and Puritanism in particular, reinforced the tendency among European settlers to consider land, not as something sacred and worthy of reverence, but as a resource to be exploited for both material and spiritual ends.

For such Christians, both of these ends had to do with glorifying and satisfying a deity who resided beyond the earth and who thus should not be too closely identified with it. However, for some early settlers, nature was was not only a material inheritance or a dangerous place. It was also a spiritual gift from God.¹

American Indian societies and spiritual practices gave way to a new way of thinking, that of Ralph Waldo Emerson, Henry David Thoreau and John Muir, who are credited with catapulting nature spirituality in North America.

“Nature always wears the colors of the spirit”

“The earth laughs in flowers.”

“Adopt the pace of nature: her secret is patience”

“What is the use of a house if you haven’t got a tolerable planet to put it on?”

“Live in each season as it passes; breathe the air, drink the drink, taste the fruit, and resign yourself to the influence of the earth.”

“Heaven is under our feet as well as over our heads.”

“In every walk with nature one receives far more than he seeks.”

“The clearest way into the Universe is through a forest wilderness.”

“Keep close to Nature’s heart… and break clear away, once in awhile, and climb a mountain or spend a week in the woods. Wash your spirit clean.”

“Take a course in good water and air; and in the eternal youth of Nature you may renew your own. Go quietly, alone; no harm will befall you.”

When it comes to modern-day nature spirituality, there are many different approaches, it’s not all the same. While we often have an innate sense of the meaning of a word, sometimes it is hard to articulate a precise definition. Whether you are wanting to solidify your understanding or learn a new word, here is a list of words that are commonly used when talking about nature spirituality.

Animism is the belief that everything in nature has a spirit that resides inside of it, a soul. All life forms have a soul or spirit including rocks, plants, water, wind, fire, humans, animals, etc. Animism is the foundation of shamanism. It is regarded as the earliest form of religious practice on earth amongst humans.

Practitioners who honor the spiritual interconnectedness of all life practice earth-centered spirituality. They often worship Mother Earth, Gaia, Magna Mater, or Tellus. But for others, the spirit of the earth is devoid of gender. It is merely the force with which life is born.

Ecofeminism is a feminist environmental philosophy that directly links the oppression of women with the oppression of nature by the patriarchy. Ecofeminists advocate for the spiritual and political liberation of both women and nature.

Those who practice goddess spirituality revere nature and at the same time honor the Great Goddess. The Great Goddess can take many forms, thus she can be revered in any culture whether it is monotheistic or polytheistic. Most of the time this path incorporates feminist perspectives, but it is not only limited to female practitioners. See also: Charge of the Goddess

The term heathen has historically been used to refer to uncivilized people who do not follow an Abrahamic religion and most often it refered to heretics or people whose beliefs were considered wrong. The term heathen, however, has been reclaimed by some practitioners. In fact, some pagans prefer to call themselves heathens, most often those who follow a Teutonic Nature religion.

Henotheism comes from the Greek heis theos meaning “one god”. However, even though practitioners worship one god, they acknowledge the existence of other gods. An example is Hinduism whose scriptures mention and praise numerous deities as if they are one ultimate divine essence.

Any religion that includes the honoring of the divine as immanent in nature is a nature religion. The majority of nature religions are polytheistic, animistic, and/or pantheistic. They can be practiced during pre-modern, modern, or post-modern times by any one of any culture. They can include the beliefs and practices of aboriginal peoples, or even ancient Greek and Roman practices, as well as Egyptian, Celtic, Teutonic, and Assyrian practices. Currently, some neopagans also include themselves in the category of nature religions.

A neopagan is a member of a modern religious movement that seeks to incorporate beliefs or ritual practices from traditions outside the main world religions, predominantly those of pre-Christian Europe and North America. Many contemporary pagans refer to themselves as neopagans. See also: Is Wiccan and Pagan the same?

Practitioners of ancient and/or contemporary Nature religions are often referred to as pagans. A pagan is also someone who practices earth-centered spirituality and/or goddess spirituality. The term pagan originally came from the word ‘paganus’, meaning someone who lived outside of the city in the village or rural areas. See also: Timeline of Modern Paganism.

Pantheism sees the divine in everything and everything as divine. A lot of traditional and folk religions can be seen as pantheistic, or a mixture of pantheism and other doctrines such as polytheism and animism.

Panentheism considers God and the world to be inter-related. In this way, the world being in god and god being in the world. It also includes a transcendent component which is often conceptualized as the Sacred Whole or Divine Unity.

Polytheism is the belief or worship of more than one god or goddess. It could be that the god takes on multiple aspects of a single being, or that there are many different gods and goddesses as well as lower forms of divinity. Not all polytheistic religions espouse a divine unity.

A person who serves as a healer and guide through the spirit world. A shaman is able to communicate with the spirit world on behalf of his or her tribe or community. In some traditions, shamans are called a medicine person. The role of shaman is defined and bestowed by the community as a whole.

Shamanism is an animistic spiritual practice that focuses on healing through ecstatic trance and spirit world journeys. There are various forms of shamanism. Traditional shamanism is rooted in indigenous cultures and the practices are passed down through generations. Multicultural shamanism is a contemporary form that integrates both old tribal customs and practices with new spiritual ways that can be from any cultural practice.

Also called the Old Religion, Wiccan Spirituality is a contemporary religious path that is often based off of the old folk religions of Europeans. It is also referred to as the Craft, Wicca, Ways of the Wise, and Neopagan Witchcraft. See also: What is Wicca?

Historically, a witch was a woman (or sometimes a man) who was thought to have magic powers that were mostly evil. Recently, practitioners of neopagan religions have reclaimed the term “witch” to remind those of the genocide and religious oppression in Europe during the Burning Times. There are many different types of witches. The term witch most often encompasses folk healers and those who refuse to follow an Abrahamic path. See also: Becoming a Witch.

¹: From the book Dark Green Religion: Nature Spirituality and the Planetary Future by Bron Taylor.