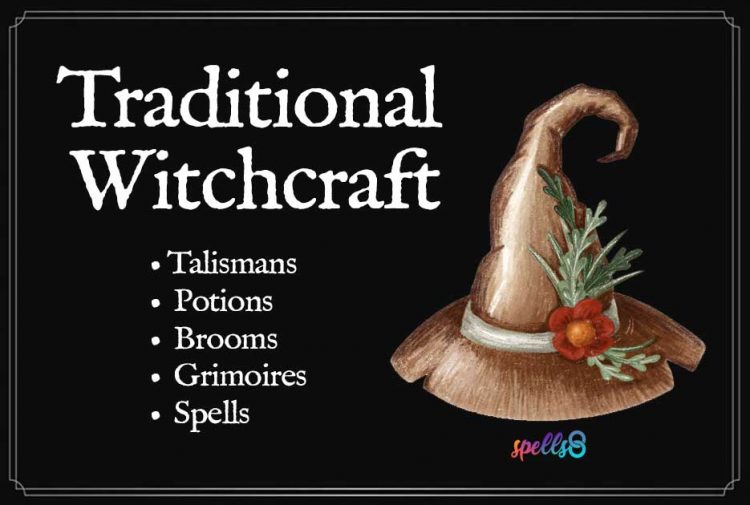 Traditional witchcraft is a non-denominational form of Magical practice that can manifest in a variety of ways. The practices, rituals, and traditions of a self-identified traditional Witch are likely to differ greatly from another.

Within the types of Witches, a Traditional Witch or “Trad Witch” is similar to a “classical Witch”. Their rites are usually bound by whichever region the practitioners find themselves in and focus more on the act of manipulating energy and embracing Nature than in spiritual belief.

Where did Traditional Witchcraft come from?

Many scholars attribute the beginnings of Traditional Witchcraft to the ancient lore of the British Isles, where pagans based their practices in agrarian rituals and worked with the native spirits of their land.

As ideas began to spread across the world through travel, innovation, and war, Traditional Witchcraft made its way through the globe. In its advancement, traditions were adapted to suit the regional needs of practitioners, making way for the traditional witchcraft we know and understand today. Learn more about the history of Traditional Witchcraft: 5 Lessons from “Drawing Down the Moon” by Margot Adler.

What do Traditional Witches believe in?

There is no one governing body for Traditional Witchcraft, just as there is no one sacred text. Many Traditional Witches might consider themselves animists, Pagans, even atheists/agnostics or Christians. Witches can subscribe to any spiritual (even religious) belief and still engage in their Craft individually. There is much freedom around who and what is to be believed by practitioners, sometimes referred to as “Witch Crafters”.

Traditional Witchcraft is occultist in essence, as it works to explore the boundaries between realms of existence. The supernatural is always at work and Magic is only energy that can be manipulated by those who understand it.

Frequently, the term “Traditional Witchcraft” is used to differentiate some Folk Magic practices from the more mainstream Wicca. Other related terms include Hedge Witchcraft and “Shamanic” Witchcraft.

However when reviewing academic literature it’s evident that all modern-day (European) Witch traditions — such as Stregheria, Feri, or the 1734 tradition — appeared at the same time that Gerald Gardner wrote Witchcraft Today, influenced by Margaret Murray, Aleister Crowley and Robert Graves.

Above all, Traditional Witchcraft emphasizes the connection between all life – specifically the energy of the natural world. It is common for witches to base their practices on the local and native flora, fauna, folklore, and spirits of an area instead of centralized or shared ideas, for example spirits of the land or spirits of the home.

The Horned God is accepted by some as a primary deity in Witchcraft and is representative of a close connection to nature. Traditional Witches of different persuasions may call the Horned God by different aliases such as Cernunnos, Pan, Dionysus, Saturn, the Green Man, Puck, or the King of the Fairies. He is the god form of wild nature and inner wisdom and is the god that guides the dying to the land of the dead.

Traditional Witchcraft prioritizes the connection to Nature above all else. The Traditional Craft invites practitioners to release previous religious indoctrination an explore spaces that might feel a bit more morally grey. Traditional witchcraft asks you to embrace the beauty in nature, but also accept the innate cruelty of the natural world. This balance is key to understanding the full spectrum of the Universe, allowing individuals to decide their own moral scopes for themselves.

Just as there is light in our world, there is darkness. We have been taught to dislike, shun, and even fear the dark forces that surround us. Traditional witchcraft offers a different perspective: darkness is a part of our natural order and must be maintained in order to keep balance. Darkness is nothing to be feared, rather we should learn to work with it.

How do you practice Traditional Witchcraft?

Traditional Witches explore the boundaries between the physical world as we know it, and the planes of existence unseen by the naked eye. They are known to be called “hedge-riders,” as they explore the hedge between our perceptible Earthly realities and subtler, invisible realms of things like spirits and dreams.

These practices can vary greatly from Witch to Witch. Often times, you will encounter rituals that include divination, astrology, alchemy, scrying, spell work, charms, and hexes. Each practice is tailored to the specific needs of the individual, rather than something that is based on shared teachings. While it is common for other Witches to pass down and share knowledge such as grimoires with their own rites and rituals, it is seen largely as an independent practice that centers around the individual.

Practical magic handiwork is a fundamental component of the path. A Traditional Witch will make things like

These types of spells are sometimes referred to as “Low Magick”, which means they are practical and easy to memorize and perform, as opposed to “High Magick” which is typically ceremonial and more elaborate. Find easy spells for modern Witches exploring the Spells8 Library of Spells.

Most of the spells here are Wiccan-friendly (i.e. following the Wiccan Rede and Wheel of the Year). However if you are looking for a Traditional Witchcraft Coven online, the Infinite Roots Coven (part of Spells8) welcomes Witches of every path who want to learn and share their practice without prejudice or biases.

Who can practice Traditional Witchcraft?

Traditional Witchcraft rituals can be practiced by anyone. While many Witches today follow a Wiccan path and often include a self-dedication ritual, there are no pre-requisites to becoming a Trad Witch nor is there is any necessary ceremony to ordain you. It is a personal choice to walk the path as it involves much self-study and exploration.

Often times, the “Traditional” aspect has to do with a specific lineage or family tradition, so many Witches choose to incorporate their own cultural heritage, ancestors’ traditions and folklore into their practices. Your relationship to your local land is at the core of Traditional Witchcraft and in this regard there are many types of Traditional Craft.

Is Traditional Witchcraft right for you?

In contrast to Wicca, Traditional Witchcraft does not adhere to a strict moral code and instead only requires practitioners themselves to develop and subscribe to their own intuitive ethics. Like Wicca, it can be practiced anywhere and by anyone, but practices across Witches in different regions will vary greatly, as native flora, fauna, and folklore are at the focal point of the traditions.

If you are looking for a Craft that is highly personal and establishes a core, intimate connection with the natural world around you, Traditional Witchcraft is a great option. It offers a space for all to develop and integrate practices into your already-established beliefs and asks very little in terms of religious indoctrination. It also encourages you to lean into and pay attention to the natural cycles occurring around you and fosters a deep understanding of how these energies influence our lives.