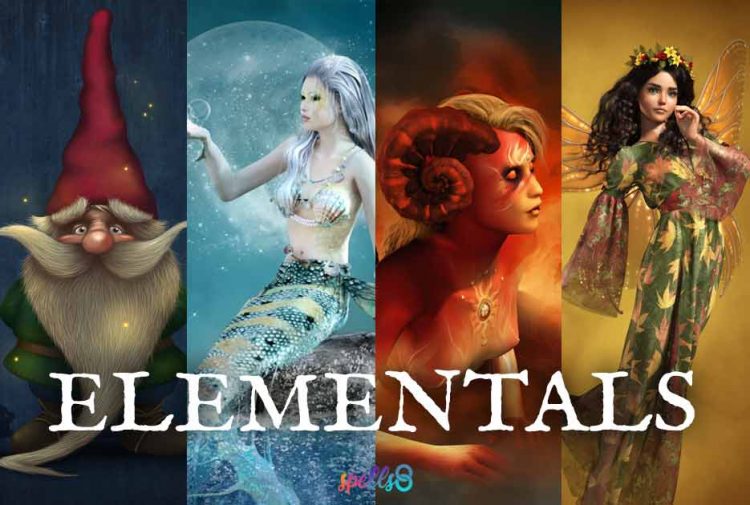 You’ve probably heard about the Four Elements of Nature: Earth, Water, Fire and Air. Wiccans and other Neopagans also work their Magic with a fifth element called Spirit (also known as Akasha or Aether). But have you ever invoked an elemental being?

Physician and alchemist Paracelsus (1493 – 1541) mentioned elementals in his works, highlighting the hybrid quality of these entities, as they are neither humans nor spirits. In this post we’ll explain what is an elemental spirit and what types of elementals exist. Instead of the Five Elements, we will use the classical view which recognizes four elements based on the four cardinal directions (North, West, South and East).

Elementals are considered interdimensional beings, which means that they can move through different planes. Likewise, they maintain a strong bond with Nature, which is why many cultures consider them protectors or guardians of the earth.

Each of these beings has the function of guarding and protecting everything that is within its realm of influence. They are considered lower spirits, incapable of incarnating in the material world, so they are generally invisible to us. However it has been claimed that they are capable of assuming human form and other appearances.

These guardians watch over our planet and can aid us in our spiritual journeys if treated with respect. Let’s explore all four types of elementals and see how you can invoke them in your practice.

Gnomes, the Elementals of Earth

Earth is the element of the North. It represents material possessions, fertility, stability, hard work, nourishment, and order. The season of Earth is Autumn, when plants return to the soil from which they sprang.

Gnomes and gnomids are the elementals of the Earth. They look like old men with their long white beards and ceremonial charm, and reside in the underbrush found in trees, roots, and soil. They can live in the mines of the earth or take care of the hidden treasures that lie there. Gnomes are the guardians of all treasures and precious metals hidden under mountains and deserts.

As Earth elementals, they also like gardens, hence the custom of placing figures of gnomes around the green areas of the home, to call for their protection and wisdom.

To invoke an Earth elemental, salt can be used as an offering on a plate. You can also bury a coin in the soil to ask them to intercede with the spirits of the earth, so that prosperity and riches come to our lives. Spend time outside and let your intuition guide you to a spot that is special.

Though generally a bit grumpy, gnomes are happy to help humans in their earthly quests. They stand ready to impart deep wisdom upon us. As keepers of material safety, you can ask Gnomes for protection in physical matters, and for aid in doing what’s right for the planet.

Their planet is Mars and their zodiac signs are Taurus, Virgo and Capricorn.

Water is the element of the West. It is associated with the soul and represents everything that has to do with emotion and intuition. Water is ruled by the Moon and deals with healing, cleansing, emotional release, clarity, inner reflection, and forgiveness.

Undines derive their name from the Latin word unda, meaning “wave”. They come in different shapes such as mermaids or nymphs, but are also thought of as the collective body of water itself. Undines are present in each drop of water.

Their presence represents beauty and dreams. They like to live in and protect the waterways and are relatively benign elementals, historically aiding sailors in safe passage. They are the most closely linked to humans and their appearance can be that of beautiful angels.

To invoke the elementals of Water in your practice, work with the cycles of the moon. Perform rituals on full and new moons (also known as Esbats).

Set up an altar with water at the center. Allow it to soak up the energy of the moon (Moon Water), and then mindfully drink or bathe in the water the next day.

To keep Undines present in your daily life, think of water as a close friend. Treat it with reverence; never waste it. With increased honor for this sacred element, the Undine is sure to support your emotional life.

Their planets are Saturn and Mercury, and their zodiac signs Cancer, Scorpio and Pisces.

Fire is the element of the South. It is associated with the heat of Summer, ruled by the blazing sun. Fire represents power, vitality, transformation, passion, strength, and drive. It is invoked for power and action.

The Salamander does not necessarily appear as the slithery amphibian one might think, though it does often appear in a reptilian form, closely related to dragons. Fire elementals can appear as little balls of light that glide across water. They are thin and dry, very similar to the grasshopper or cricket, although much larger in size.

The Fire element is associated with two opposites: Creation and destruction. Salamanders can cause, control and extinguish fire. They can root out negative forces, hexes and curses that fall on a person. Fire elementals also have the ability to clean and purify all low passions and all vices, helping to make a change that allows improving everything that hinders one’s development.

Invoke the Salamander with a flame. Safely light a fire, burn a candle or incense, and practice gazing at the flame’s licks or at the smoke. Feel the warmth of the fire lighting your own internal flame. Call upon the Salamander to reignite lost passion, or give you the strength to carry through difficult tasks. The Salamander is ready to aid in your evolution.

Their planets are the Sun and Jupiter, and its zodiacal signs Aries, Leo and Sagittarius.

Sylphs; the Elementals of Air

Air is the element of the East. It is associated with the mind and its season is Spring. Air represents the intellect, goals, ambition, fun, communication, and strategy.

A Sylph, like air, is ethereal. It does not take on a physical form but is seen in wispy fancies, much like clouds. Though some folks actually see fantastical flurries of light and color, the Sylph can appear mentally, even in the thinnest of air.

These creatures of Air are said to look like very beautiful children with rosy faces. They can be the most mischievous in character and they represent thought. They are directly related to inspiration, knowledge, communication and travel.

The spirits of Air are the ones that cause the winds and shape the clouds, they have a preponderant role in the growth of plants, flowers in particular. Sylphs are carriers of the life-sustaining energy that nurtures all living things, the breath. On subtle levels, sylphs transmit the currents of Spirit from heaven to earth.

Working with Sylphs is all about intention. Because they lack form, the Sylph is greatly comforted by your faith alone. Pay respect to the Eastern sky, or pay extra attention to the breezes that caress your cheek. To invoke the Sylph in your ritual or spell, practice different forms of breathwork, or gaze at clouds and stars. Look to Sylphs for inspiration and clearing mental blocks.

Their planets are the Moon and Venus, and their zodiac signs Gemini, Libra and Aquarius.

Four Elements and the Directions of Magic

One way to invoke all elements at one during ritual work is by casting a circle and Calling the Quarters. The quarters are the four cardinal points which are traditionally linked to each of the four classical elements. Each quarter is ruled by a watchtower or guardian, in Christian-influenced magical traditions they are symbolized by the four Archangels.

In Neopagan traditions, these are the correspondences of the Elements and Directions:

Spirit or Aether; a Culmination of All Elements

None of the elements work in isolation. It is an interdependent web in which each plays with the other.

In a place where all Elements are present, word and reason transcended, we experience Aether; also known as Spirit, Akasha, or the Fifth Element.

Aether is the bridge between physical and spiritual. It is the universal energy that fills all spaces; present in all things, and thus difficult to define. It is said that Spirit is the communication channel that the elemental beings of the four elements will use to come into contact with those who request their presence.

Learn more about the Fifth Element here: Aether or Akasha