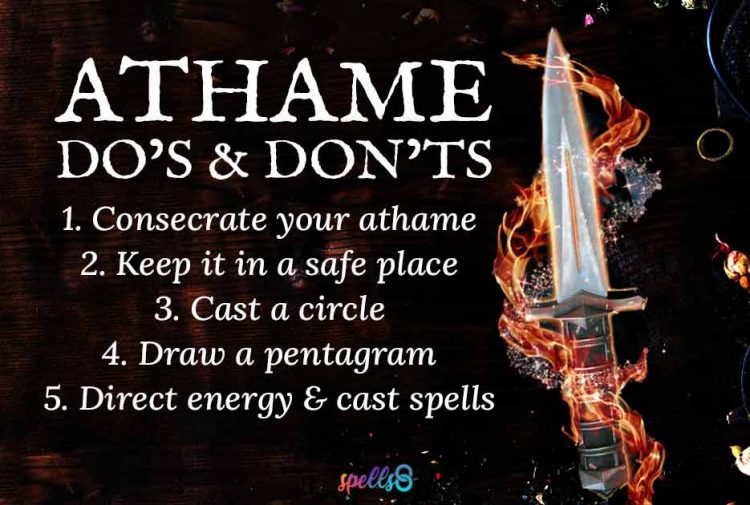 Whether you’re a practicing Witch or just a newcomer to the Craft, you may have heard about the athame, the ritual dagger of Western witchcraft and occultism. Let’s explore some ideas on what to do with an athame in your Magic practice.

An athame is a double-edged dagger, generally made of steel and with a black handle. It is used by Neopagan practitioners in their rituals, to manipulate and direct energies. The athame is a ritual tool and it can be used to create inscriptions and images of a Magical nature, such as sacred circles and pentagrams (five-pointed stars).

How to Use an Athame: 5 Ideas

1. Do: Consecrate your athame

Consecration means setting the tool apart from the mundane, i.e. making it sacred. Stories of swords with magical names and powers are very common in mythical literature. Feel free to give your athame a name or ask your athame for its name.

Bless your tool with a consecration ritual as explained here. As with other Magical tools, the athame acquires our energy with its contact and use. Optionally, carve symbols of power or protection on its handle.

2. Do: Keep your athame in a safe place

The athame is a very personal tool of the Witch, almost an extension of the practitioner’s will. It should be treated with respect as its presence alone can set the mood of your rituals and help you raise energy during a spell.

Keep it on your altar with your other tools during ritual and store it away in a safe place. Put the sheath on while not in use to protect the blade. Every so often, you may want to clear your tools’ energies with a cleansing ritual, as you would do during a candle cleansing.

3. Do: Cast a circle with your athame

The athame is a powerful tool for defining limits and boundaries. You can use your athame to ceremonially mark these limits. Its common for the Wiccan High Priest/ess to use an athame to trace the circle before ritual in a coven setting. Learn how to cast a circle here.

4. Do: Draw a pentagram with your athame

The five-pointed star is a symbol of power and protection in Wicca and other Neopagan traditions. Hold the knife in your dominant hand and draw the gestures in the air as you visualize a golden light coming from the horizon as you do it. Repeat for each of the four quarters.

5. Do: Direct energies and cast spells with your athame

The athame may be used when consecrating, charging, or empowering sacred objects like amulets, talismans, or poppets. Develop a relationship with your tool by working with it as you experiment with casting spells.

The athame represents fiery masculine energy and is used in combination with the cup or chalice, which represents the intuitive side. This combination evokes the act of procreation as a universal symbol of creation. It is also a symbol of the Great Rite in Wiccan rituals.

How Not to Use an Athame in Magic: 3 Don’ts

1. Don’t: Cut or carve materials with your athame

A smaller, white-handled knife, called a boline, is the tool of choice when cutting ingredients or carving surfaces. While the athame cuts on a spiritual level (e.g. cutting energy cords), the boline is used for practical purposes such as harvesting herbs, inscribing candles with symbols or sigils, or cutting physical cords (e.g. thread or ribbons). An athame is not generally used for cutting.

For the consecration of the boline, Scott Cunningham recommends:

2. Don’t: Use your athame as a weapon

Janet and Stewart Farrar suggest in their book “A Witches Bible” that the tip of the athame is blunt to avoid damage during use in ritual. Thea Sabin states in “Wicca for Beginners” that according to various traditions the athame is never used to draw blood, becoming tainted and requiring destruction if it does.

Whil an an athame is not considered a weapon by most practitioners, you should be mindful of the legality of knives in your area. If you’re going to cast spells in public, research the law before you go out with a knife to avoid potential problems.

Not every ritual requires an athame. As a sacred tool, it has a sacred purpose. Before using your athame for an invocation ask yourself if this is something that you could do with a wand instead.

What’s the difference between the athame and the wand? Since the athame has an edge that cuts, it is more aggresive and can be used to create strong divisions or separations during a ritual. The wand is a gentler tool, used to direct energies by invitation (summoning), not by force (command). While the athame is associated to strength, the wand is associated to wisdom.

Read also: How to Make and Consecrate your Witch’s Wand.

Symbolism matters, so consider the correspondences of each tool (such as its elemental or planetary associations) and choose the best tool for each spell.

Now that you’ve learned about the athame, it’s time to find one that suits you. You can craft it yourself or buy one. But you don’t need to break the bank.

If you don’t want to buy an athame, start with a kitchen knife. Wash it well and consecrate it for its Magical use. Don’t put it back in the kitchen drawer! This tool will now only be used during your spellcasting works.

When shopping for an athame, take your time and, if possible, handle it in person before you buy it. Notice how it makes you feel and decide if it is in alignment with who you are and what your practice means to you.

Where to Buy an athame?

Buy local! Find a metaphysical shop near you. Or explore these online alternatives:

♂ Masculine: The athame is considered to be a phallic tool and therefore of masculine energy.

✵ Directions South and East: corresponding to Fire and Air, depending on the tradition.

Having blessed your altar, cast a circle and place your athame on the altar, along with a bowl of water, a dish of salt, incense and a candle. Say:

“With the Elements of Air, Fire, Water and Earth,
I consecrate this, my athame, to the Goddess and the God.
For the good of all, and according to my will. So mote it be.”

Read also: Dedication of an Athame by Berta

This tool will accompany you for years to come, as a powerful conduit of energy. It will serve you in directing the intentions which will shape your rituals and your path deeply.