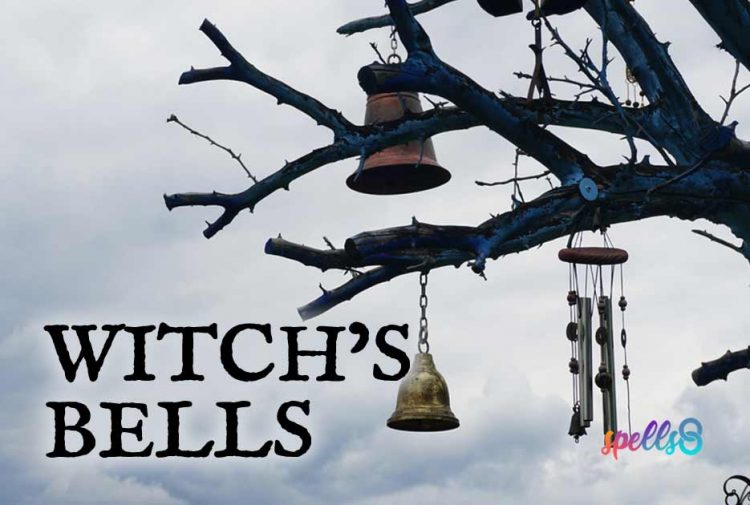 “Look Daddy, Teacher says, every time a bell rings an Angel gets his wings!”

Today, we’re going to learn about bells – specifically Witches Bells – their origins, purpose, and uses. Traditionally speaking, bells have been used throughout differing cultures and societies, both for spiritual and mundane reasons as well as other varied reasons, including protection.

Are you hearing bells that aren’t there? The spiritual meaning of bells can be that of beginnings and endings, a call to order, or even a command or a warning. Bells have come to represent varying concepts and ideas within their appealing soundwaves.

Bells have long been associated with protection in the sense that bells would be used as an alarm or a warning of impending disaster or danger – as in a fire or an enemy attacking – or as someone important arriving. Businesses would hang a bell over the door of their establishment in order to alert the proprietor of a potential customer.

Just like hanging a broom over the door for protection, bells can be hanged near the main entry of your home to protect and guard your living spaces.

Bells have long been used by farmers, by placing them around the necks of their cows and their dogs so that they would always know where their animals were. Over the centuries, bells have also been used as musical instruments – most likely because of their melodic tinkling sounds.

Conventionally speaking, people made bells from iron and, according to European lore, iron scares off or, at the very least, agitates Fairies. This belief was so prevalent, that folks would keep iron horseshoes above the doorway to ward off the Fae and the evil spirits. The idea of “horseshoes” as symbols of good luck most likely came from this belief.

The word bell literally translates as: “to roar” or “to make a loud noise” – as if to bellow. The first bell was invented in the 3rd millennium BC in Neolithic China, as archaeological evidence suggests. By the time the Medieval Period rolled around, bells had become a prominent as well as permanent tool throughout society – used by churches, farms, and business owners alike.

Iron bells were characterized as protection in various ways – an example would be church bells being employed to scare off trickster spirits. Bells have been mostly made of metal and consist of a hollowed out cup or vessel with a dangling piece inside called a clapper or uvula. As the bell is swung (or rung) the clapper hits the inside walls which produces a ringing sound.

What are Witch Bells for?

It was believed that loud sounds, like those from bells or chimes, would scare off ghosts and demonic entities. Not just the iron from which the bells are made has a cleansing, protective effect, it is also the purifying sound waves, ringing through the air that ward off the evil.

Bells are typically part of the arsenal of the Witch’s tools. They have many uses in witchcraft. When hung on the door of your home, bells can bring positive energy, protection, and prosperity. Bells can guard doors in your home.

During Roman times, the citizens would hang tiny bells and wind chimes called tintinnabulum on the gates of their homes and altars to the gods of the home. Quite often, these bells were found hanging from the huge, erect phallus, of a male figure, which at the time, it was believed to magically ward off the evil eye. One is able to enchant bells as to be protectors or to bring cheer to any home each time they ring or peal.

How to Make Witches Bells

Witches bells’ are a handheld-size set of magical bells hung from a doorknob or a nail in the home. You can make your own Witch’s bells by getting a set of small bells and hanging them from a cord as in a Witch’s ladder.

Hanging a bell by your front door helps raise vibrations through sound. This simple spell will help to keep negativity and spirits that mean you harm, away from your home and family.

The following incantation will help activate or enchant your bells:

“Guard our Home, Bell on the Door, let Evil Spirits come no More.
Evil Spells shall Not be Cast, and Good Fortune shall Ever Last.
So Mote it Be!”

“Guard my Home, Bells on the Door, Let Only Blessings walk on this Floor,
Block all Evil and the Dark Arts, May only Good Approach our Hearts.”

Hanging bells on the door 🔔

The use of bells in general, and Witches’ bells in particular, continues to this day – in our everyday world, we are surrounded by the “peals of bells” everywhere we go.

You can make your own Witches Bells by using any items you’d like, however, here are a few items which are necessary in order to get the job done:

So, what are Witch Bells?

As we’ve seen, these jingly little talismans can be used to ward off negativity in the home – however, they are also very appealing both to the eyes as well as the ears! Additionally, “this magical ringing device” has origins which date far back into antiquity, and one cannot help but notice the correlations between bells and the modern doorbell – as well as with musical instruments.