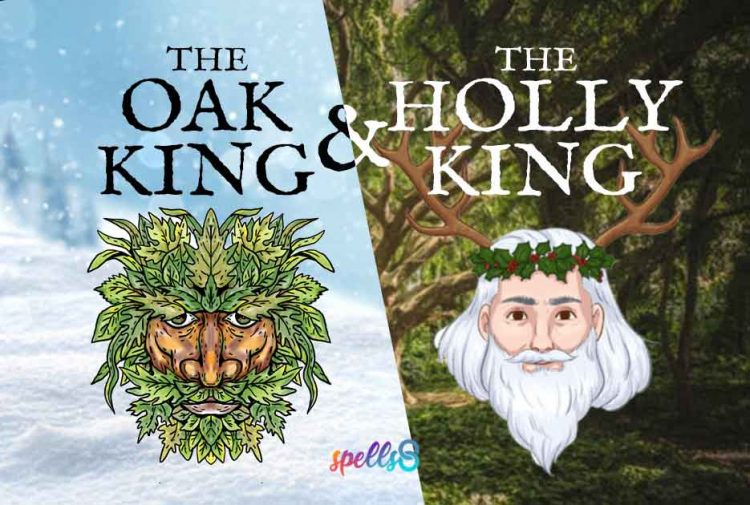 The Winter Solstice approaches and we are getting ready to celebrate Yule. It’s a good opportunity to retell the legend of the Oak King and the Holly King, personifications of winter and summer in various traditions. This is how the story goes:

The brothers couldn’t be persuaded to stop their fighting. One hot day, when the sun was high in the sky, and it seemed night would never come, the Holly King drew his sword against his brother and they fought. Although the Oak King fought bravely, the Holly King struck a mortal blow, and the Oak King fell.

Each day, the hours the sun shone grew shorter. Each night, the moon rode in the sky for a bit longer. The days grew shorter, and cooler, the nights, longer and colder. Snow started flying. The Holly King could think of nothing but his brother.

Finally, the land was bare and dead and all plants slept. Many animals slept through the cold times, and those that didn’t sleep had a hard time finding food and shelter. One night, when it seemed like the sun would never rise again, the Lady came to the Holly King and said, “Don’t despair, your brother isn’t dead. Here he is to take his turn at ruling.”

And there stood the Oak King, young again, and healthy, and the Holly King happily stepped aside for his brother to take his place as King of the land.

The days grew longer, and warmer, the moon rode in the sky for less and less time. The land grew green again, and the plants and animals awoke.

Each year the cycle continued, one brother ruling the green time, and one the dark time. And this is the story our ancestors told to explain how our seasons were created.

Read also: The Wheel of the Year