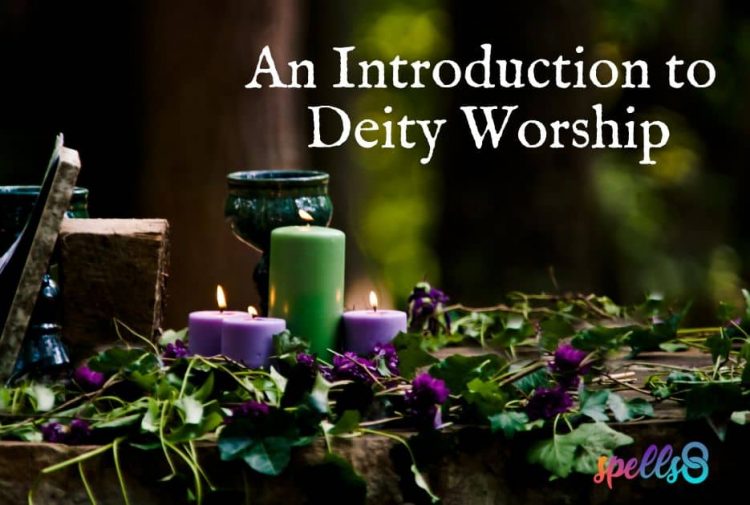 A fundamental pillar of Paganism is worshiping the deities that one believes in. While all practicing Pagans have varying beliefs about the gods and goddesses, most agree that honoring their deities is a great way to connect with them and further their spiritual goals.

Many different gods and goddesses are worshiped in Paganism. It’s important to distinguish between the deities one believes in because the appropriate methods of worship differ for each one.

Read on to learn more about Wicca worship and the best ways to honor the Pagan deities you believe in.

What Deities are Worshiped in Paganism?

The way an individual practices Paganism is unique to their own beliefs. The same can be said for the deities one believes in. Perception of the divine can only be discovered by looking deep within oneself and determining what makes the most sense to you.

Some Pagans may worship a single God, like in the monotheistic religions of the west. Others may find they believe in multiple gods, like the polytheistic religions of ancient Greeks, Romans, and Egyptians. Some Pagans see the divine as a split between the masculine and feminine — a duotheistic divide between a God and a Goddess — while others believe in an overarching all-in-one creator.

You will find very distinct interpretations of Paganism in all practicing witches, and not all witches are practicing Pagans. Though some views are more popular than others, most of them have a deity or deities that can be worshiped in many different ways.

Worshiping a Goddess or God

Before deciphering the best way to worship your deities, it is important that you find a path that feels right to you. This path can, of course, evolve as you continue your spiritual journey. However, it’s always a good idea to start out somewhere that you feel comfortable.

Next, it’s time to do a bit of research and get to know your gods and goddesses better. This will help you determine the most appropriate methods of worship.

Most deities have quite a bit of history and mythology behind them. For example, if you decide to honor the deities within the ancient Greek religion, it helps to read up on the many stories of these gods. Each of them represents a mastery over different significant parts of the world and life. If you wish to perform an honoring ritual with the intention of abundance, you may choose to honor Plutus, the Greek God of Wealth.

It may also help to read up on the history of the gods to learn how citizens in certain traditions originally worshiped them. You don’t need to copy exactly what they did, but it could help you create rituals that feel more authentic to you.

Design Your Worship Around a Deity

Every deity is different. Once you learn more about them during your research, you will be better equipped to answer the question of how to worship them. You should worship your gods and goddesses with things you believe they would like. You can design your usual deity worship practices around what you know about the deity you are choosing to worship.

For example, say you decide to worship the Egyptian Goddess Isis. She is a Goddess of healing, magick , fertility, motherhood, rebirth, and death. In ancient Egyptian times, people commonly worshiped her by creating shrines in their houses, conducting ritual baths, tending to a garden in her name, and more. You can choose to partake in these ancient practices or they may inspire you to design your own contemporary ones.

You may also choose to perform a ritual in her name. Because her essence is said to be in anything green from nature, it might be a good idea to have something from outside in your ritual. Other common offerings to Isis include red roses, perfumes, wine, candy, and more.

Keep in mind that there is no right way to worship any specific deity. You should do what feels right to you with the information you have and with whatever your intentions are.

While researching the deity you want to worship, it is probable that you will happen across specific rituals and holidays that already exist in the tradition. Looking into these is a great way to learn more about the deity as well as explore ways to continue honoring them.

You may choose to take these holidays and celebrations and make them a part of your life. It’s never a bad idea to throw another celebration into your year.

Interestingly enough, many different spiritual and religious traditions have a sort of continuity between the holidays they celebrate. You may find some similarities between holidays you’ve never heard of and holidays you’ve practiced all your life.

For example, there is an ancient Roman holiday called Saturnalia that worships the agricultural god Saturn. Because the holiday occurs near the winter solstice, the celebrations are heavily associated with what we now call Christmas. In fact, many of the traditions stemmed from this ancient holiday.

While Christians celebrate Christmas in honor of Jesus Christ, many Pagans choose to celebrate Saturnalia in honor of the winter solstice and the changing seasons. Most ancient holidays are open to your own interpretation and can be celebrated according to your beliefs while keeping cultural context in mind.

Respect Your Relationship With Your Deities and Others

Whatever form of worship you conduct, it is most important to remain respectful of your deities and the relationship you have formed with them. Anything divine deserves a degree of respect and admiration.

Keep the connection between you and your deities sacred. Uphold the vows you make and the intentions you cast. Enter into these relationships with love and an open mind. Reinforce your bond by continuing to honor the deities most important to you.

You should also remain respectful of other people’s relationships with their deities. Because there is so much variation in which Pagan deities people honor, there is bound to be someone who worships different gods than you.

Never try to convert or influence anyone’s beliefs that differ from yours. Nobody’s way of worshiping deities is necessarily wrong- they just choose a different path that feels more right to them.

In the end, the way you decide to worship your deities is entirely up to you and open to your own interpretation and belief system.

View devotionals for several deities from different Celtic nations. These include Brighid’s devotional for inspiration and Cernunnos’ prayer for abundance.

Divine Masculine Energy: What It Is & How To Use It

The divine masculine has been an integral part of humanity since the beginning of time. Most people think masculinity has been in control and in power for thousands of years. What if I told you that masculinity has not actually ever reached its point of power?

Tarot is a wonderful divination tool that can help us see into the future. It can also be a useful guide for self-reflection and exploration. However, you can also use tarot when trying to identify a deity that may be reaching out to you.

Get the Tarot Spread »