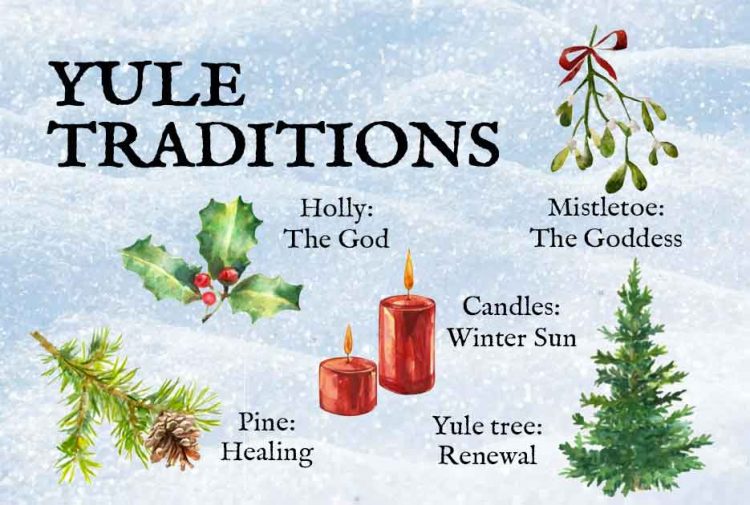 It’s the holiday season, which is the time of year that we celebrate many Witches’ favorite day. Put the Yule log on the fire, set the feast, and hang the mistletoe. Around December 21st, we gear up to celebrate Yule, also known as the Winter Solstice or Midwinter.

Throughout centuries and across cultures, we have gathered together in the darkest part of the season to hold festivals for light’s return. In this article, we’ll explore what Yule celebrates, and how to bring Winter Solstice blessings with magickal, practical Yule traditions and ritual ideas.

For Christians, this time of year is marked by Christmas and the birth of Jesus Christ. Hanukkah is the Jewish celebration of the Festival of Lights. It is observed with the menorah, which was said to have burned for eight days without sufficient oil. Kwanzaa is the American celebration of African heritage, and it is marked by seven candles which represent the principles of its people.

Yule is based in the Pagan tradition of celebrating the Wheel of the Year, while Christmas belongs to Christianity. Many religions have adopted Pagan rituals over the years in an effort to bring Pagans closer to their celebrations and spiritual systems. This is why church officials settled on December 25th as the birth of Jesus Christ, to coincide with existing pagan festivals honoring Saturn and Sol Invictus, the Pagan gods traditionally celebrated at the Winter Solstice in Europe.

What Does Yule Celebrate?

In Pagan traditions, we celebrate Yule as the return of the sunlight. At Samhain we celebrated the end of summer and the fruits of the harvest. Yule marks the shortest day and longest night of the year. This is when the sun begins, once again, to rise in the horizon, promising the start of a new seedtime; encouraging us to move forward and trust that spring will come. Yule is a way to celebrate rebirth.

This sentiment comes from the ancient folklore of the Oak and Holly Kings, who mark the cycles and celebrations of rebirth throughout the year.

In Celtic mythology, the dark and light seasons of the year are ruled by a set of twins; the Oak King and Holly King. The Oak King rules the Summer, championing light, fecundity, and growth. The Holly King is the Ruler of Winter. He presides over the darkness, bringing death to the land. Each reigns over half the year. The two are in an infinite battle to rule.

When the respective twin falls, he journeys to the underworld and meets the Earth Goddess. To her, he sacrifices himself in love, becoming her mate and then dying in her embrace. He is after reborn to serve in the immortal equilibrium that is the seasons, and all of life; a constant dance of light and darkness.

Read it here: The Story of The Oak King and The Holly King

There are so many ways to celebrate the Winter Solstice. Sift through and find which ones bring the most excitement to you and your household!

Decorate your home and your Yule altar with these ornaments and Yule imagery:

As in all Pagan festivals celebrating the Wheel of the Year, dishes for feasts were determined by what was seasonal and available. A feast in the heart of winter meant that the table was spread with foods either preserved earlier in warmer months, or unearthed from where they grew despite frost above.

Though you may have more access than our ancestors, try to use foods that are local and seasonally appropriate. In the Northern Hemisphere, these are the foods traditionally associated with Yule:

Warming Spices like ginger, cloves, turmeric, and cinnamon often made their way into Yule feasts, helping the winter stores to shine. These fiery spices were a symbol of heat from the reappearing sun.

Dried or Preserved fruits were a special treat enjoyed during Yule. It was common to use dehydrated whole fruits or pickled chutneys and jams including figs, dates, apricots, pears or apples. Preserved and dried fruits are easily incorporated into many dishes.

Root vegetables such as beets, potatoes, carrots, turnips and parsnips were able to withstand the frost. Even after their leaves died back, root veggies could be harvested from the earth as needed. I love to use Golden Beets, as they remind us, the sun is returning!

Winter squash harvested in autumn kept well throughout winter. Growing for months to sustain us through a time without harvest, winter squashes are a necessary component of the Yule table.

Alcohol was a ready treat; at the time of Yule, ferments brewed in warmer months were aged to maturity. Solstice feasts were warmed with wine, beer, and mead. Wassailing was a tradition celebrated in one of two ways: a group would either go door-to-door with a wassail pot, sharing a cup (or two) as they sang carols and spread good cheer, or they visited friends’ orchards and drank wassail while making merry and blessing the fruit trees, wishing them well for next years’ harvest.

Conifers are reminiscent of immortal life, as they remain green throughout the dead of winter. Many don’t know, but much of the trees are edible! Try pine needle tea or young cones preserved in syrup.

Make a Yule Log Dessert. If you aren’t able to light your own Yule log on fire, don’t worry! You can still bring the spirit of Yule to your home with a Yule log dessert. The Bûche de Noël cake became popular in the 19th century. Decorate as you’d find it in nature.