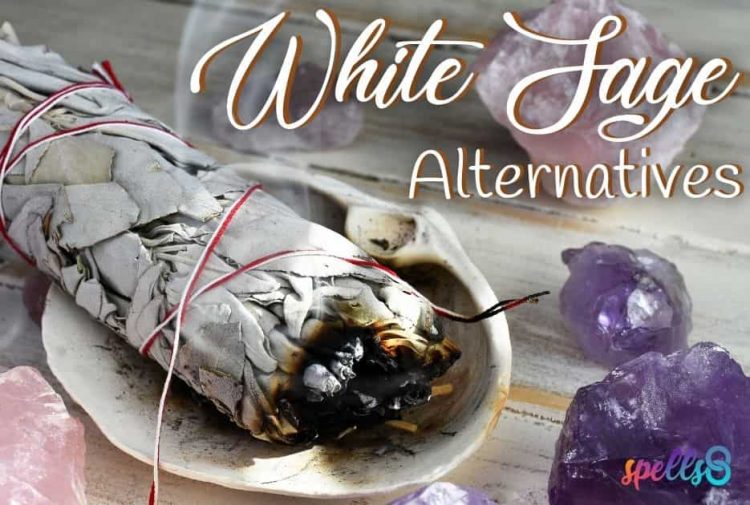 White sage (Salvia apiana) is one of the most common herbs you will find in metaphysical spaces. Today it is almost synonymous with witchcraft and New Age spirituality. Over the last several years there has been more cultural awareness surrounding white sage, its historical and current use among Indigenous Americans, and its conservation. Today, I am going to do my best to take you through some of these points and give you some alternatives to buying white sage for your practice. As an important note, it is always best to defer to the Indigenous Americans and First Nations people when it comes to their sacred medicines. They tended this land and were stewards of Turtle Island long before it was colonized. Their voices matter.

What is White Sage?

White sage — also called bee sage or sacred sage — is a shrub native to Southern California and northern Baja. This is the only region in the world where white sage grows naturally[1]. White sage generally grows between three to five feet tall and three to five eight wide. It grows fairly fast and does well in dry regions with full sun. It is a generally fragrant plant with silver-white leaves and white flowers. White sage is not only used for groundcover and bank stabilization. It is also an important food source for bees, butterflies, and other pollinators. It has also been used as an ingredient in food recipes as well as medicinally.

In spiritual spaces, white sage is an herb that is used for cleansing and clearing negative energies. It has a long history as a sacred medicine for Indigenous People of the United States and First Nations people of Canada. It is commonly found in metaphysical stores, on Etsy from personal cultivators, and even on Amazon. It is sold in many different varieties as well. One variety is known as Dragon’s Blood White Sage. This sage is often dyed red in some manner and sold at a more expensive price.

To understand why you may need a white sage alternative, it is important to understand how white sage is viewed today. Then we will discuss some of the cultural significance of white sage before discussing some alternatives to buying white sage. In the New Age community, white sage is seen as the best herb to burn for smoke cleansing. It is common to hear white sage recommended as the first go-to herb when beginners ask for tips on home and spiritual cleansings. It would be almost impossible to walk into any New Age or metaphysical store without seeing white sage on the shelves.

The reason for this is simple, though some might find it hard to hear: the practice of burning white sage for cleansing was taken from the Indigenous people, whether forcefully or freely given, stripped of its cultural significance, and sold to the masses. As this happened, the religious practices of Indigenous People in the United States were still not protected by law even though the first amendment of the United States Constitution gives all citizens the right to practice their religion. It was not until 1978 through the American Indian Religious Freedom Act (AIRFA), less than 50 years ago, that Indigenous people were legally given the right to freedom of religion.

The American Indian Religious Freedom Act (AIRFA) became law on August 11, 1978 to ‘protect and preserve for American Indians their inherent right of freedom to believe, express, and exercise the traditional religions of the American Indian, Eskimo, Aleut, and Native Hawaiians, including but not limited to access to sites, use and possession of sacred objects, and the freedom to worship through ceremonials and traditional rites.’

One of the many uses of white sage for Indigenous people is the ritual of smudging. Even the media has picked up this idea that waving a smudge stick around the home and fanning the smoke is all there is to it. You can see it in movies, books, and even shows on television. Even the Kardashians are seen using sage smudge sticks to remove negative energy from their home.

Despite some New Age and witchcraft sources, smudging is not just smoke cleansing. To smudge a space is to perform a specific ritual with specific steps and specific prayers. To wave a stick of sage around a room to cleanse it is not the same as smudging, and to conflate the two practices is to water down the cultural significance of a marginalized group of people that have fought so hard for their freedoms. It also does a disservice to the person performing the ritual, whether properly or not. If you are going to perform a cleansing by smoke, it is important to do it properly if you are following certain traditions.

It is possible to be taught how to smudge! In fact, many Indigenous people have taken to the internet to share their traditions along with the cultural background in the hopes of keeping their traditions alive. According to Debra Courchene, an Anishinaabe knowledge keeper, smudging is performed to “walk through life in a good way.”[2] It is also used to cleanse the body and spirit, removing any negativity that may have been picked up.

It is also important to understand that people of a culture are not a monolith. There will always be differing opinions on shared cultural practices. There will also always be those who have different opinions on the value, or lack thereof, of consensual cultural exchange. This is a nuanced topic and one that will not be covered in its entirety in one post.

White sage is one of four sacred medicines of the Indigenous Peoples of North America and the First Nations of Canada. The other three Sacred Medicines are tobacco, cedar, and sweetgrass. In Braiding Sweetgrass by Robin Wall Kimmerer, we can begin to see the importance of sage in the story of Nanabozho. This shows us only a small part of how white sage is viewed and worked with.

When Nanabozho came to the West, he found many things that frightened him. The earth shook beneath his feet. He saw great fires consume the land. Sage, mshkodewashk, the sacred plant of the west, was there to help him, to wash away fear.

Today, white sage is in danger due to poaching, overharvesting, and climate change. Regardless of how you feel about cultural practices and preservation, I think many people, witches and non-witches alike, can understand the importance of ecological preservation. While White Sage is not currently identified as being endangered on a governmental level, we can understand that it is not sustainable to pay undocumented workers to risk their lives to sneak into a nature preserve and illegally harvest white sage. In one case, four individuals were arrested with over 400 pounds of white sage from the Etiwanda Preserve in California[4].

There have even been instances where Native people have taken children of their tribe to land where white sage grows in abundance only to be met with heartbreak.

As an herbalist, Cordero-Lamb had brought many youth groups to this site to teach them how to care for the land and harvest leaves, respectfully and sparingly. Usually, they were alone in the hills. But as they pulled up to the trailhead, they saw a huge truck, filled to mounding with white sage, driving away. When they got to the sage grounds, they found that the people in the truck had “ripped it all up by the roots,” she recalls. “It was completely destroyed.” Some of the elders present “sobbed their hearts out.”

How the Rage for Sage Threatens Native American Traditions and Recipes

No method is going to be without its issues, but I believe that as long as we try our best, use our best judgment, and honor the culture that holds white sage as sacred, that is progress. Here are several ways you can help combat the illegal and unethical harvesting of white sage, all by using alternatives!

It is possible to grow your own white sage. Doing so can help cut down on the demand for purchased white sage that is often harvested in unsustainable or unethical ways. There are many places where you can buy white sage seeds, both in stores and online. You may also be able to find white sage plants sold in stores in your area. Be sure to keep in mind that white sage requires specific growing conditions and a dry, hot climate.

Growing your own sage can also help you grow a personal connection to the plant. This can allow for a better understanding of the plant from an animist perspective as well as an ecological one. Besides, growing your own plants gives you an appreciation for the work it takes to keep them alive, healthy, and thriving.

This option may be a bit more difficult depending on where you live, just like growing your own sage. It can be hard to ensure that your source is ethical and sustainable, but one way to ensure this is by purchasing your sage from Indigenous or First Nations people. Do some searching in your local area, see if there are reservations near you, or have a look around online for Indigenous or Native-owned stores. You may even have luck with local PowWows or Native American events in your area. You can use Native Land to see which tribes of people are Indigenous to your area and then broaden your search.

The main reason witches use white sage in their practice is for cleansing. But did you know that there are many other herbs, some that are probably in your kitchen right now, that are just as effective at smoke cleansing? Using an herb that is more widely available, does not have cultural significance to marginalized people, and is not in danger of poaching is an excellent way to combat the unethical cultivation of wild white sage. Here are just a few herbs you can use in place of white sage.

No matter where you stand on the idea of cultural misappropriation and the use of white sage, I think it is fair to say that many pagans and witches alike will do what they can to support the fair treatment of our Earth. If all it takes to do your part is switching it up and finding an alternative to buying white sage, it seems it’s as easy as saying Blessed Be!

If you still need some inspiration for your cleansing, try these posts and courses! You can even join us over on the forum to ask for the opinions of others.

This powerful herbal bath will help those who are feeling tired, lacking confidence and strength, or even dealing with depression, anxiety, and spiritual blockages.

Cleansing and purifying baths are typically used to rid the bather of negative influences and evil spirits. Although it’s not always necessary, it’s a good idea to perform a ritual bath before casting spells, especially if you are not feeling 100% present or in a clear state of mind.

How do you cleanse a new home?

On the forum, Nuria asked how to go about cleansing a new home before they moved in. Join the coven and see what advice everyone had to give!

It’s common for a Green Witch to have their own garden in which they may grow their own food, spices and remedies. The process of growing a plant instead of buying it allows the Witch to establish a deeper connection with each herb and its purpose or Magical use.