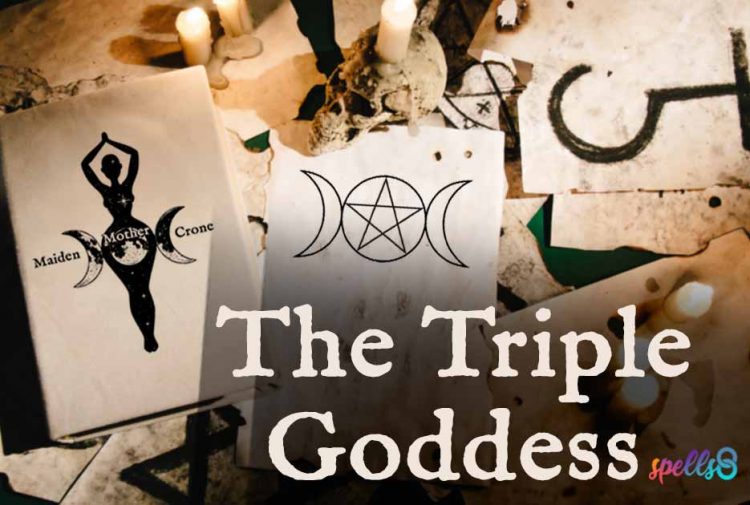 The Goddess’ Temple: Myths & Symbols of the Divine Feminine in History The Triple Goddess: Symbol & Meaning of the Maiden, Mother, Crone

You’ve likely seen the Triple Goddess symbol associated with Wicca: 🌒🌕🌘 But did you know that the concept of a triple goddess can be traced back to a number of ancient civilizations throughout the world?

In this article, we will explore who exactly is this mysterious figure, the Triune Goddess: Maiden, Mother and Crone.

Who is the Triple Goddess?

It’s believed that the triple goddess has been worshiped since before recorded history. We can trace the worship of triple goddesses back to ancient Greek, Roman, and Celtic pantheons, as we will explore below.

While many Wiccans and Neopagans worship the Triple Goddess alongside the Horned God, She is three at once: the Maiden, Mother, and Crone. However this association was not observed in ancient times. Historically, some deities were depicted as siblings or as three separate goddesses united as one, rather than three life stages of the same entity.

Let’s take a look at some of the different beliefs surrounding the Triple Goddess, many of which are still practiced today.

Modern Worship of the Triple Goddess

Gardnerian and Alexandrian Wiccan covens believe the goddess’s true name is sacred, revealing it only after initiation. Other practitioners may view the Maiden, Mother, and Crone as placeholders representing goddesses from preexisting pantheons.

In many Wiccan practices, the Goddess is worshiped in triplicate, made up of three forms: the Maiden, the Mother, and the Crone. These archetypes are are sometimes depicted as three life phases of a single goddess paralleling the phases of the moon (Waxing Moon, Full Moon, and Waning Moon).

The maiden-mother-crone archetype of the Triple Goddess is meant to echo a woman’s life cycle and the many aspects that she embodies in her lifetime. These three phases also represent the passing of a year and the cycle of seasons or Wheel of the Year. A practitioner may call upon these archetypes to aid in their magical practices.

It’s important to remember that, in Wicca, some people see the gods and goddesses as individual entities, while others prefer to see them as manifestations, faces, or “aspects” of one universal being. Some people see all gods as one God and all goddesses as one Goddess, and yet some others see them not as beings but archetypes. Your personal path may vary from other Wiccan practitioners.

This first phase of life corresponds with the Waxing Moon, represented with a crescent moon symbol 🌒. It is a time of youthful hope – energy is quickly gathering, much like the years of a young maiden slowly creeping up to claim her youth.

The maiden is in the springtime of her life, embodying beauty, innocence, curiosity, and self-expression. The maiden is free to play without judgment, to express her creativity boundlessly, and to leap without fear into the unknown.

▶️ Watch: Charge of the Goddess

This prayer may be recited in Wiccan rituals during the Opening ritual, or more precisely, during the ritual of Drawing down the Moon. This version was written by Doreen Valiente.

The mother archetype is embodied by the Full Moon 🌕, round and ripe with child. She is ever doting and protective, blessing us with abundance in the summer months. Much like the summertime, she is full of life and potential.

The crone is a wise matriarch, mysterious and intimidating, yet imparting her divine intuition to her people. The symbol of the Waning Moon 🌘 represents this facet of the triple goddess, sharing her boundless wisdom with the next generation as she settles into a more restful state of being at the winter of her life.

While not initially part of the core Wiccan beliefs, the triple goddess became more widely accepted among covens in the 1970s. Aspects of the goddess are sometimes pieced together from deities of other religions.

Make this Goddess Anointing Oil at home. to embody the qualities of the Goddess in any of her incarnations.

Apply on yourself (temples or wrists) to connect with the Goddess. Or use it to anoint your tools, as you cleanse your candles with it or during ritual work or as an offering to the Goddess with an invocation.

🔮 Explore the Infinite Roots Coven: “Praying to the Triple Goddess?”

Origins of the Triple Goddess

The idea of a triple goddess is expressed in a variety of ways, depending on the lens of the culture viewing her. While Wicca may still be considered a fairly new religion, the triple goddess has been worshiped by a multitude of ancient pagan cultures across the world.

To the ancient Greeks, the triple goddess Hecate was one of the most powerful and ancient entities, and the very midwife that aided in Zeus’s birth. Born of the titans and existing since long before the gods of Mount Olympus, Hecate is still worshiped by practitioners today.

Watch: Drawing Down the Moon

Renewal and blessing are the main ingredients of this beautiful evocation. A chant to activate lunar powers with the Triple Goddess’ presence.

Meditate alongside this video prayer

Although Hecate is one of the most ancient deities to have been depicted in triplicate or as a young maiden, she has been adopted by some Wiccans as the embodiment of the Crone archetype. Artemis and Persephone, although not seen in statues of three like Hecate, are often interpreted as the Mother and Maiden, as well as Demeter.

We also know that the Greeks viewed the number three as sacred and representing the omnipresent and all-knowing, so any deity shown as such would be one of great power. This idea was echoed in the three all-seeing Fates, a concept that would become intertwined within triple goddess lore throughout the years.

🔮 From the Infinite Roots Coven: Deities: “More than one?”

The Roman goddess Diana was also seen in triplicate, her different facets representing Diana as the huntress, Diana as the moon, and Diana of the Underworld.

To some, Diana is viewed solely as the maiden aspect of the triple goddess. This is likely due to Diana’s dedication to celibacy as well as depictions of Diana as a young maiden or a huntress prowling the forest.

The worship of Diana was adapted into Dianic Wicca in the 1970s and remains a cornerstone of feminist Wiccan covens and beliefs, although not without controversy.

Cerridwen is a Welsh triple goddess; she represents all three stages of the Goddess (maiden, mother, and crone). She is the Lady of the Cauldron of change and of wisdom. She is a shape-shifting patroness of Magic and the Craft.

Brigid is a goddess of the hearth and the arts, who would later be adopted by Christians as St. Brigid. She is one of the few pagan goddesses of European origin that has worked her way into beliefs worldwide, leaving footprints even in the practice of Afro-Caribbean voodoo as the entity Maman Brigitte – Loa of the Dead.

Brigid rules over the domain of three vital skills among the Celtic society: smithing, healing, and poetry. She had a multitude of attributes, and her trifold aspects each held the same name but were often accepted as unique entities within the pantheon.

Perhaps the origin of the modern Wiccan triple goddess, Brigid is often worshiped in conjunction with a male figure: the horned god Cernunnos.

Viewed as the Egyptian triple goddess, Isis is considered a steadfast symbol of fertility, magic, and motherhood.

What’s interesting about this deity is that Isis has mothered more religions than you may think. Tales of Isis tricking the god Ra with a serpent seem to have inspired another well-known story, just as depictions of Isis nursing Horus were said to have been the model for Christian depictions of the Madonna and Child.

Over time, the worship and recognition of Isis as the Crone archetype was adopted by modern practitioners of Gardnerian and Dianic Wicca. This is a separate belief system when compared to Kemetic Wicca, which follows the Egyptian pantheon.

In hinduism, the three main female deities are called the Tridevi, and take on the roles of Creator, Preservor, and Destroyer. The triad is made up of the Hindu goddesses Sarasvati, Lakshmi, and Parvati, who are the three wives of the Trimurti.

If worshiping or working with the Triple Goddess is an important part of your Wiccan practice, then keep learning about the Myths and Symbols of the Divine Feminine. As you dig deeper into the ancient knowledge that these goddesses harness you will better understand how their divine intuition can influence both your spiritual practice and everyday life.