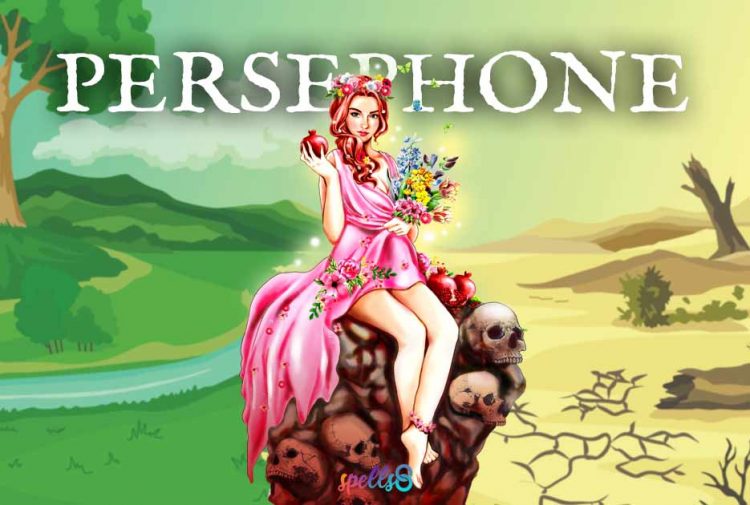 Persephone is the Queen of the Underworld in Greek mythology. Daughter of Demeter (Mother Earth) and Zeus (King of Olympus), she keeps the secrets of the dead and was known among the Romans as Proserpina.

The myth of Persephone is traditionally told around Samhain by Neopagans, and is also popular in mainstream society. Persephone and her mother Demeter (Goddess of the fertility of the Earth) represent Nature, with its powers of transformation and its cycles.

Persephone is also called ‘Kore,’ which means both ‘daughter’ and ‘maiden’ in Greek. Kore is her name as a vegetation goddess. According to the Eleusinian Mysteries, Persephone divided her time between Earth and Hades, acting as Goddess of grain and Queen of the Underworld for each half of the year.

The Eleusinian Mysteries were the secret re-enactment of this myth which occured once a year in Eleusis, Greece. Followers of the cult of Demeter and Persephone celebrated in a religious festival which led its initiates through a symbolic life, death, and rebirth. For the initiated, the rebirth of Persephone symbolized the eternity of life which flows from generation to generation, and they believed that they would have a reward in the afterlife.

The young Kore (Persephone), daughter of vegetation Goddess Demeter, was picking flowers by the lakeside. Suddenly, the earth beneath her cracked open and a chariot pulled by black horses surfaced. Hades appeared and forcefully decided to take Kore to live with him in the Underworld. Her name changed to Persephone and she became Queen of the Underworld. Demeter began long and sad journeys in search of her beloved daughter, during which the land became barren.

Demeter went to see Helios and asked if he knew what happened to his daughter. He confessed that she had been kidnapped by Hades. She then turned to Zeus, who sent Hermes (in some versions, Hecate) down to the Underworld and retrieve his daughter. Zeus had promised that Persephone would be restored, provided she had not yet tasted anything in hell. Hermes went and ordered Hades to return Demeter’s daughter. Before she let her go, Hades gave her a pomegranate, of which Persephone ate six seeds.

The fact that Persephone had eaten a fruit from the Underworld meant she was confined to remain there. Eventually, an agreement was made; Persephone would spend six months in the Underworld, one month for each seed she ate, which would correspond to the seasons of fall and winter, and the rest of the year she could live on the surface with her mother, which would correspond to spring and summer.

The myth provided an explanation for the changing of the seasons. The Eleusinian Mysteries were a yearly festival which represented the myth of the abduction of Persephone from her mother, in a cycle with three phases: the descent (loss), the search, and the ascent, with the main theme being the ascent of Persephone and the reunion with her mother, symbolizing death, regeneration, and the immortality of nature.

Pomegranate: The pomegranate is a symbol for life and abundance, but also for death. The many seeds in the fruit represent the capacity for new life and new growth. However, pomegranates appear to bleed when cut, and this symbolizes the link of Persephone with the world of the dead. The pomegranate is a symbol of fidelity in marriage and, in the myth of Persephone, it chained her to her life with Hades, representing her captivity too.

Torch: In Persephone’s myth, Demeter spent days wandering the earth with a flaming torch in each hand searching everywhere for her missing daughter. The torch symbolizes her eternal vigilance and her tirelessness illuminating the way back from the Underworld, or the regeneration of life in spring.

Seeds of grain: Persephone is the embodiment of spring and a personification of vegetation, especially grain crops, which disappear into the earth when sown, sprout from the earth in spring, and are harvested when fully grown. Likewise, Persephone dies as she stays in the Underworld and is reborn when she comes back to earth in the spring.

Flowers: Not only was Persephone picking flowers when she was abducted, but also flowers were associated with birth and life after death. Flowers are a main symbol of the return of spring after winter.

Ancient Greek poets left us the concept of “ancient triad” in which a deity is worshiped as three. In Plato’s Symposium, the Goddess Demeter is a triad made of Kore, Persephone, and Hecate.

Wiccan views of the Goddess usually include a similar archetype of Maiden, Mother, and Crone. The archetype has many possible interpretations but it generally references three stages of human life, in connection with never-ending cycles of transformation.

In the religions of the Orphics and the Platonists, Kore is described as the all-pervading goddess of nature who both produces and destroys everything, and she is therefore mentioned along with or identified as other such divinities including Isis, Rhea, Gaia, Hestia, Pandora, Artemis, and Hecate.

In the Rider-Waite Tarot deck, we see a reference to Persephone in the High Priestess card. She sits in Solomon’s temple between the pillars of wisdom, with pomegranate trees growing behind her.

Titles and Epithets of Persephone

Due to Persephone’s complexity, she has been given many names and titles. Some of these names at titles are as followed:

Many myths and archetypes such as Demeter-Persephone remain latent in the collective unconscious and sometimes jump to people’s consciousness in times of crisis and change. Deities may approach us in different ways, whether as archetypes or as real entities. It’s different for everyone.

As a Queen of the Underworld, Persephone understands trauma, loss, shadow, mental illness, anguish, pain, and cold. She sees beyond the veil, far past what most are unaware of. Working with her can help you uncover the darkest aspects of yourself and life, helping empower you into a much better version of yourself.

You don’t need any special signs or “calling” to worship a God or Goddess. If you feel a connection to Persephone or if you have a special interest in her, start your worship by reading the mythology and learning more about her.

Meditate upon the image of Persephone and let her voice, touch, and thoughts embrace you. Listen to her and talk to her.

How to Worship Persephone

Get to know Persephone through by reading her myths and poetry. Tend to a garden or keep a plant, practice herbalism, perform ritual baths in her name, go on a nature walk, pick up litter, honor the dead or visit a graveyard.

Make an offering or say a prayer. There is no right or wrong way to worship the Goddess. Always be respectful and sincere.

Strengthen your dedication and devotion to her by crafting an altar to Persephone. Here are some ideas:

Write some poetry inspired by her story or make a music playlist for her. Set up a bird feeder in the spring and summer. Perform your personal dedication by your Persephone’s altar.

There are many beautiful ways of praying to Goddess Persephone. Here is a prayer to invite Brigid into our ritual, inspired by the Orphic Hymn to Persephone as translated by Asphodel P. Long.

Chant this prayer with a Waxing Moon 🌒 to call upon Persephone’s power of renewal and rebirth.

“Come, Persephone,
With your paint-pots and brushes:
Stipple the fields with flowers,
Dot the branches with bright blossoms
Streak the Spring sky with pale pastels.
You are the one who paints the eyes on the pansies,
And the lines on the lilies so the bees can find their food,
And the blushes on the rosebuds.
Without you,
The bearded iris would have no smile
And the black-eyed susan would be blind.
Come, Persephone:
The world has rested too long
Under Winter’s snowy cloak.
Come bring your brushes and bright colors
And dress us in the shades of Spring again.
We invoke you, gracious maiden of freedom and beauty.
So mote it be.”

Clean away and banish the Winter with a Spring Cleansing Chant

In ancient Greece, Hades was not considered intrinsically evil or some sort of “devil”. He was simply the ruler of the domain of the dead. Meanwile, the God of Death was Thanatos. Hades was simply a caretaker of the dead and can be seen as a representation of the balance in life. He was worshipped in times of death and offerings to him were buried in a pit. Invocations were said with palms facing down after pounding on the ground as though to gain his attention.

Hades had no festival of his own and no temples were dedicated to him. In fact, most ancient Greeks were afraid of saying his name so they’d call him by his many epithets, such as the Unseen One or the Wealthy One (Plouton).

Inspired by the Orphic hymns written in the late Hellenistic period, and voiced by Joy for Spells8, this is a humble way to connect with the Lord of the Underworld. Hymn to Hades »