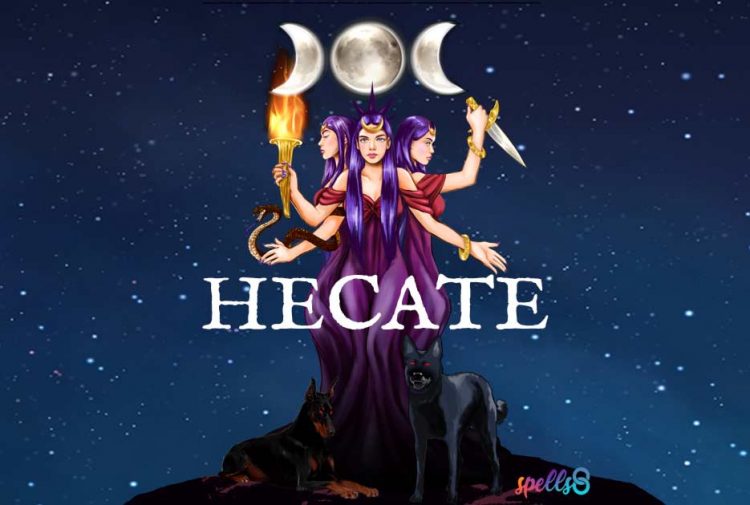 A mysterious Greek deity, Hecate lives in the corners of the Greek mythos. A goddess of crossroads, magic, poison, and the undead, Hecate was also the daughter of the Titan Perses and the nymph Asteria, according to Hesiod.

Hecate’s name (Greek: Hekate, Latin: Hecate) means far-reaching one, and hints at this goddess’s wide influence over a variety of earthly and supernatural affairs. Some scholars suggest that this name ties her closely with the goddess Artemis, and that Hecate might actually be a shadowy aspect of Artemis.

Hecate belongs to a group of deities known as protectors of the oikos, or household. She had good company in this regard, with other protective deities being Zeus, ruler of the gods, and Hermes, the herald of the gods. Her association with boundaries such as walls and doors give her a quality of between-ness.

Hecate mediates between realms: inside the city and outside, the realm of life and the underworld, the household and the world. Hecate’s mediating presence led many followers to ask that bad fortune or malevolent spirits be kept from their household, and Hecate had the power to either rebuff or admit spirits into a home.

Hecate is heavily associated with the crossroads, the place where multiple paths intersect. She, along with Hermes, is responsible for fate that travelers meet on the road, therefor it would be wise for any traveler to make offerings to the goddess in hopes of a safe journey.

The ancient Greek poet Hesiod noted that Hecate received much praise from Zeus, the King of Mount Olympus. Zeus often showered Hecate with gifts, and the other immortal deities of the Greek pantheon honor her as well in their various ways. Hesiod even goes so far as to say that when a human makes a sacrifice, that human invokes the power of Hecate herself and it is her decision whether to bestow fortune and happiness upon that person.

The goddess was also known for her closeness to both medicines and poisons. She taught other mythological figures such as the witch Medea how to work with Magic. Those who practiced the Eleusinian Mysteries (the most famous of the secret religious rites of ancient Greece) paid homage to Hecate, and psychoactive and hallucinogenic plants were unsurprisingly associated with her as well. Many magical and esoteric practices occurred at the Eleusinian Mysteries. Hecate’s presence as a goddess of the Mysteries imply that she played a significant part in moving from a normal state of consciousness into the state of ecstatic madness that the Mysteries became famous for.

The best way to connect with Hecate, like any goddess or god, is through the mythology, epithets and symbols. Here’s a summary of the most important tales featuring the goddess Hecate, and how to worship Her in your personal pagan practice.

In the stories, Hecate helped the gods in their struggle against the Gigantes, the hundred giants mothered by Gaia. The Gigantes were known for their aggression, and Hecate killed the giant Clytius with her famous torches. She also assisted Zeus in his war against the Titans, despite being born to a Titan herself. Odysseus, the hero of the Odyssey, took Queen Hecuba as a slave after the fall of Troy. When Hecuba slew a king and was in turn killed for her crimes, the gods transformed Hecuba into a black dog, whereupon she became Hecate’s animal companion.

One of Hecate’s most famous roles in Greek mythology is when she serves as psychopomp to Persephone. A psychopomp is a being involved in the transmigration of the soul. The mythic ferryman Charon is one such figure, ferrying the souls of dead across the river Styx. Likewise, Hecate performs this function with Persephone.

Persephone, to give a quick backstory, was the daughter of the harvest goddess Demeter. Zeus gave the god of the underworld, Hades, permission to abduct Persephone (goddess of vegetation and spring) and take her into the netherworld. Demeter enlisted the aid of Hecate in the search of her daughter Persephone. Hecate brought her famous torches to help and she and Demeter searched and searched for Persephone to no avail. Eventually, the environment and the harvest ground to a halt.

Nothing would grow from the Earth, and soon thereafter living things began to die off with no regeneration. Dismayed at this sorry state of affairs, Zeus sent the messenger god Hermes to the underworld to fetch Persephone. Hades agreed to allow Persephone to leave, but he tricked her into eating the seeds of a pomegranate. Since she tasted of the fruit, Persephone was obligated to spend the winter in the underworld with Hades and the rest of the year with her mother and the gods.

In some versions of the story, Hermes is the only one who leads Persephone out of the underworld after this occurs. However, there has been artwork depicting Persephone leaving the underworld as Hermes stands to the side. In this depiction, it is Hecate that leads Persephone out with her trademark torches that she had used earlier to search for the missing goddess. As the goddess of boundaries, it is fitting that Hecate be the one to lead Persephone across the threshold of the dead, back into the world of light and the living.

Hecate as Goddess of the Underworld

Hecate’s legacy has been kept alive in the imagination, far past the days of Ancient Greece. Shakespeare mentions her in two of his most famous plays, Macbeth and A Midsummer Night’s Dream, and there have been several new religious movements as late as the 1920s that performed mysterious rituals and sacrifices in Hecate’s honor.

Hecate is a versatile goddess. The Queen of the Night, she influences events in the heavens, on the earth, and at sea, thereby guaranteeing that she touches life whether it flies, swims, or walks. Her association with medicine and poison give her dominion over sickness and health, as well as mind-altering states brought on by psychoactive substances. In this sense, Hecate helps facilitate altered states of mind, watching over individuals as they travel to the inner depths. And her fondness of dogs implies a fondness for animals and companionship.

Hecate’s most important aspect, however, is that of the boundary-walker. Like many other deities of liminal spaces, Hecate can often be polymorphous, taking a different shape based on the situation. She is a fluid and mysterious goddess. Some fear her, some revere her, but all should respect her as she tends to the places that delineate the known from the unknown. She appears in triplicate, and three is an appropriate number for the goddess of boundaries: inside, outside, and Hecate, the one who travels freely in between.

One of the most famous symbols of Hecate is the triple-formed statue. The Greeks would place these triple-formed statues near a pole, much in the same way the herms of Hermes would be used to fend off evil or misfortune. In latter-day paganism, Hecterions (a form of pillar) depict the goddess with six arms, three torches and three sacred symbols: A Key, A Rope and A Dagger.

Torches: Hecate is often shown holding two torches, symbolic of her role as guide and initiator in the Eleusian Mysteries. Hecate acted as guide and companion to Persephone in the myth and in the ceremonies enacted each year, marking the seasonal changes and the growth of and harvest of the grain of the Goddess Demeter. Her torches provided light in the darkness, taking the seeker on a journey of initiation, helping them to overcome the restrictions of the obstacles they would find in their way. The torches continue to be an important symbol of her mysteries, the fire and the light of illumination, not of darkness, but of light.

Hecate’s Dogs: She often took the form of a dog, as well as taking on dog companions. In the Greek myth, Hecate became Persephone’s guide and companion in the Underworld. It is said that the howl of a dog may herald the arrival of the Far-Reaching Goddess. Early depictions of Hecate’s dogs were friendly and affable; but later on the goddess’s dogs suggested demons or agitated spirits, but what led to this shift in perception is a matter of speculation.

Hecate’s Sigil: The strophalos is a spinning top, or wheel, used in Magic. It is an emblem of the goddess Hecate. The symbol is said to be the depiction of a labyrinthine serpent around a central spiral. The labyrinthine snake is representative of rebirth and renewal and relates to the three faces of Hecate.

Crossroads: Boundaries limit us in our day to day life, providing obstacles that we must traverse in order to grow. As the Goddess of Crossroads, Hecate’s role in mediating boundaries, as well as her association with the underworld, make her a goddess of a mystery that’s plagued humans for as long as we’ve known of it: death.

Epithets and Names of Hecate

Here’s a short list of the titles and names of Hecate:

How to Worship Hecate

As a “goddess of witchcraft”, Hecate has been incorporated in various systems of modern witchcraft, Wicca and Neopaganism, in some cases associated with the Wild Hunt of Germanic tradition, in others as part of a reconstruction of specifically Greek polytheism, in English also known as “Hellenismos”.

In Wicca, Hecate has in some cases become identified with the “Crone” aspect of the Triple Goddess. The 3 aspects of the Moon are associated to three Greek goddesses:

Add this information about Goddess Hecate to your Book of Shadows! Print and download this page for free here: Grimoire page: Goddess Hecate.

🖨️ Get more pages to complete and organize your magical grimoire here: Printable Pages for your Book of Shadows

One way to work with Hecate as a Wiccan or Neopagan, is to craft an Altar for her. Include her symbols or depiction (such as a statue or an illustration) and leave offerings to Hecate:

Hecate of the Crossroads Incense

Incense making is a meditative and enjoyable way to exercise your creativity! Make this incense for working with the Queen of the Witches, the Goddess of liminal spaces, crossroads and sorcery.

To honor Hecate, burn this incense at a crossroads. This incense recipe is included in the DIY Witch’s Apothecary Course.

As a goddess of journeys, she oversees the transition from life to death, and, such as in the case of Persephone, from death back into life. Hecate’s torches illuminate the dark, signifying whether or not it is safe to venture through a given doorway or portal, as well as illuminating any strangers nearby.

Do you work with Hecate? Share your experiences with the Coven! Conversations about Hecate

A simple chant to invoke Hecate, goddess of the crossroads and Queen of the Night:

In summary, Hecate is a goddess of guidance. She is a watchdog for those in need of her, keeping bad influences from crossing over a household boundary. Given her dominion over the underworld, the sea, the sky, the earth, as well as the fates of travelers (of whom we all are), Hecate is enjoying a newfound resurgence in reverence as people re-discover the immense power and protection that this goddess affords those that please her.