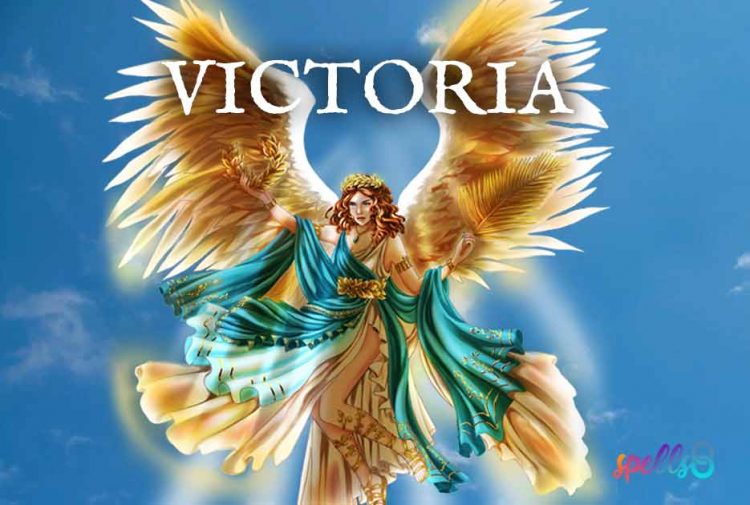 Victoria is the Roman Goddess of victory. Historically, she was there to reward Roman soldiers who were returning from war. Unlike her Ancient Greek counterpart Nike, Victoria specifically represents victory over death and is to celebrate the winners of war, rather than athletic conquests.

The best way to worship Goddess Victoria is through her symbols and her mythology, with offerings to her on an altar at home.

Victoria was adapted from the ancient Sabine Goddess Vacuna, who was called on as a goddess of protection. Although we don’t know what Vacuna protected, it is likely the Sabine people – a civilization that lived in Italy before Ancient Rome.

Small statuettes of Victoria, called victoriola, were gifted to victorious Roman generals for succeeding in battle. She is depicted on ‘triumph’ gates such as the Arc de Triomphe in Paris, and the Brandenburg Gate in Berlin. Il Vittoriano in Rome has two depictions of Victoria. Emperor Augustus ordered an altar for Victoria to be created in the Roman senate building, the Curia Julia.

It was believed that Victoria would decide who would win wars, and therefore Ancient Roman’s created altars and offerings to Victoria in the hope of winning her favor. She was a representation of winning over death, and would reward the winners of the battle.

Victoria’s symbols are all in relation to war and victory. There were several temples to her in Ancient Rome, and a statue of Victoria was considered a prize that were bestowed upon Roman generals after they were victorious in battle.

The Laurel Wreath is a symbol of military victory. Commanders and emperors wore them after battle. Victoria is often depicted with a laurel wreath to indicate she is celebrating the winners of war.

The Palm Branch was often given to a victor in athletic feats and was used to symbolize victory in Rome from 293 BC onwards. Victoria is regularly seen with a palm branch.

The Chariot: Victoria is often seen on a chariot. The chariots were the Ancient Roman primary method of transport, but also a symbol of power or glory.

Victoria’s Wings: Wings were another symbol of victory, and often in Roman architecture wings were carved into buildings to symbolize victory without using Victoria herself. She is depicted with large wings and represents the spirit of victory.

Victoria’s Shield: She is often depicted with a large shield said to be inscribed with the names of war victors and trophies from her defeated enemies.

How to Worship Victoria

The cult of Victoria was one of the last pagan cults to succumb to Christianity. Because of this, even though Victoria is considered a minor Roman goddess, she was very important. She had a temple on Palatine Hill, and an altar in the Roman senate building.

Victoria is thought to determine who will win in battle. Unfortunately, this is still prevalent today, with the many battles and wars ongoing on our planet. You can turn to Victoria for help and create an altar or offering for her to win her favor.

As a pagan, one way you can connect with Victoria is to create an altar for her and include her symbols or depiction as we’ve mentioned above. It can be a statue or an illustration, and you can leave offerings such as:

Considering crafting a laurel wreath as a symbol for victory and give it as a Magickal Offering or use it in a spell for success.

With Roman gods you may want to make an offering to Janus before your ritual as he is the gateway to the gods and goddesses. You also are expected to give a last offering to Vesta, the goddess of the home and hearth.

If you’re providing offerings to Victoria or Janus, you should place it into a fire on a raised an altar for the offering to reach the sky. When offering to Vesta, as she is a goddess of the earth, you should pour or place the offering into a hole in the ground using your left hand and then burn or bury it with the right hand held over the fire or touching the earth.

Hymn to Victoria (Nike), adapted from the Orphic Hymns:

“O powerful Victoria, I invoke you, who can in battle confer the crown, the victor’s prize, the mark of sweet renown; for you rule all things, Nike divine! And glorious strife, and joyful shouts are yours. Come, mighty Goddess, and your suppliant bless, with sparkling eyes, elated with success; may deeds illustrious your protection claim, and find, led on by you, immortal fame.”

To make a victory charm, find a feather (or cut paper in the shape of a feather) and empower it with this incantation:

‘With the wings of Victoria, I will rise
above all areas where trouble lies
Through diligence and mastery I will see
today begins my victory!’

Carry this token anytime you feel your confidence waning, or when you need a boost to get over any seemingly insurmountable obstacle.

(Chant by Patricia Telesco, from “365 Goddess: A daily guide to the magic and inspiration of the Goddess”.)