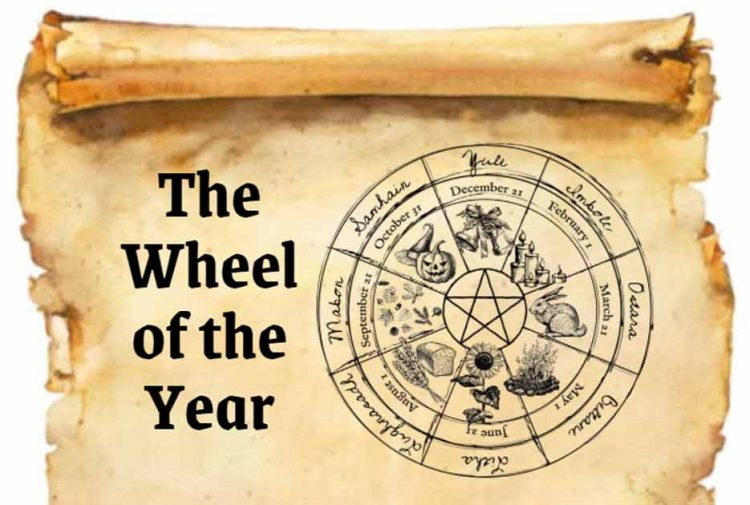 Many Witches, Wiccans, and other Neopagans celebrate at least some of these eight festivals throughout the year, and these festivals are known as Sabbats. They are four seasonal and four solar festivals that occur every year around the same dates, as we will see below.

Neopaganism is a nature-based spirituality in which Nature is revered. The Wheel of the Year is celebrated by Pagans, Wiccans and all those who choose to follow a calendar of natural cycles, with seasonal celebrations set in around the solar festivals.

Who invented the Wheel of the Year?

The Pagan Wheel of the Year was popularized in the mid 1960s by Gerald Gardner and other precursors of Wicca. It was inspired by earlier works such as those by Robert Graves and Margaret Murray who claimed that witches gathered during the sabbats, including May Day, Halloween, February Eve and August Eve.

The major events in the Wheel of the Year are the solstices and equinoxes, which are precise astronomical moments relating to the position of Earth and the Sun. Their exact dates vary each year because the modern calendar (Gregorian calendar) only has 365 days while the Earth takes a bit longer (365.25 days) to travel around the Sun, so an extra day is added every 4 years (leap years).

In any case, about every six weeks, there is a sabbat to get excited about, and now, let’s see what dates each Sabbat falls on.

Note: Because every year the precise date of the equinoxes and solstices changes, we say that the sabbats occur “on or around” the dates mentioned above. If you live in the Southern Hemisphere click here.

Sabbats have their unique meanings, histories, and correspondences. Despite the differences between them, all are times of cheer, celebration, but also introspection, endings, and new beginnings.

If you are signed up to our Wiccan Newsletter, you will receive a ritual for each sabbat on your inbox. There is no right or wrong way to celebrate the sabbats, which is entirely up to the practitioner or coven.

Wheel of the Year Printable Page

This PDF version comes with a transparent background so you can print it on any kind of printer-friendly parchment paper.

Explore the Grimoire PDF pages on this website to find more resources you can add to your own Book of Shadows.

What Are The Lesser Sabbats?

Rather than being determined by absolute calendar dates, the dates are determined astronomically. The equinoxes mark the days of the year when daylight and darkness are equal in length, and the solstices mark the longest and shortest day of the year.

What Are The Greater Sabbats?

The four Greater Sabbats or “cross-quarter days” are Imbolc, Beltane, Lughnasadh, and Samhain. These sabbats are also known as “Fire Festivals” and mark the turning of the seasons through Earth’s natural cycle of life, death, and rebirth, which coincides with the traditional Celtic agricultural cycle. As a result, their calendar dates are the same every year.

It is also common for some Pagans to observe only two of the Greater Sabbats annually: Beltane, celebrating life, and Samhain, celebrating death. That reduces Earth’s annual cycle to these two opposite aspects.

Beltane and Samhain are typically considered the most important ones, as they occur when the veil between our realm and the spiritual world is at its thinnest. Therefore, it is more likely that communications between the two dimensions will be successful for approximately a week before those two Sabbats. Communication and divinations can continue even after those two Sabbats.

It’s important to mention that the Wheel of the Year in the Southern Hemisphere works opposite to that of the Northern Hemisphere because the seasons are inverted. Also, people who live near the equator or close to the poles may not experience the same natural cycles. Keep in mind that the Wheel of the Year is a Eurocentric construction and you are free to modify or adapt it to your location and personal preferences.

Celebrating the Sabbats can help witches form a deeper connection with Earth and its natural cycles, as well as their chosen path. You can celebrate each Sabbat with a simple ritual and share it with fellow Witches at the Infinite Roots Online Coven, even if you are a solitary practitioner.

Now, let’s start going over all of the eight Sabbats in detail, starting with Yule, the first sabbat.

Yule is celebrated on December 21st in the Northern Hemisphere and June 21st in the Southern Hemisphere. A solstice is one of two days when the sun is farthest from Earth’s equator during the solar year. The astronomical event occurs during summer, the estival solstice, and winter, or the hibernal solstice.

Another name for Yule is Midwinter since it occurs halfway between Samhain, the historical beginning of winter, and Imbolc, the historical origin of spring. Yule celebrates the sun’s rebirth as the days begin to grow longer again, signaling the return of life on Earth. It is a time for spiritual renewal, as well as for spending time with family and friends.

Yule is the first sabbat of the year because the year is considered to start right after Samhain, on November 1st. This is because, before there were clocks and calendars, the Celtic day, just like in Hebrew tradition, began and ended at sunset. Likewise, the year was considered to begin with the dark half.

Pagans celebrate Yule as a time of hope with family and friends. Christmas customs, as well as Yule tradition, are rooted in ancient pagan Midwinter celebrations. Thus, today’s Pagans also enjoy caroling, Yule logs, the exchange of gifts, and many other traditions, old and new.

Imbolc, also known as Imbolg, is one of the Greater Sabbats. It is also called Brigid’s Day or Candlemas. Brigid’s Day is one of two pagan holidays associated with a specific God or Goddess. The other one is Lughnasadh. Pagans celebrate Imbolc between February 1st and 2nd, roughly halfway between Yule and Ostara.

In many countries, the spring equinox marks the beginning of spring, but the ancient Celtic calendar established it on Imbolc. So, contemporary pagans celebrate this sabbat as the first of three annual fertility festivals to commemorate the earliest stirrings of earth’s return to life.

There are many ways to incorporate Imbolc into your life, even though it is one of the quieter Sabbats. There is no right or wrong way to observe the holiday. As a family or individual, you can celebrate or commemorate it independently.

As one of the four Lesser Sabbats, Ostara is the Pagan celebration of the spring equinox. Pagans celebrate Earth’s apparent return to life and the balance of day and night during this sabbat, the second of three annual fertility festivals.

Ostara is one of the most recently introduced Sabbats, and its celebrations are more casual and lighthearted than some of its older counterparts. The celebrations can be as relaxing or as ritualistic as you wish so that you can incorporate them into your life in many ways. Celebrate with friends and family, or do so independently if that’s what you prefer.

This Sabbat, which marks the third and final fertility festival of the year, celebrates fertility, love, and reproduction, commemorating how Earth renews itself.

There are many ways to incorporate Beltane into your life, making it one of the strongest Sabbats. How you observe the holiday is entirely up to you. If you prefer, you can celebrate alone or with family and friends.

Read also: How to Celebrate Beltane

Litha, the fourth Lesser Sabbat, celebrates the summer solstice. As it occurs halfway between Beltane, the start of summer, and Lughnasadh, the harvest season, it is also called Midsummer. The power of the sun and Earth’s lush, green growth are celebrated by contemporary Pagans, connecting with the earth’s life and magickal energies.

The sun is at its furthest point from Earth’s equator during the solar year at the solstice. This is the longest period of daylight and the shortest night of the year, which is sometimes celebrated by lighting a bonfire that will burn all night. It occurs every year around June 20th to 23rd.

You can incorporate Litha into many parts of your life, and it is a happy and carefree sabbat. Your celebration can be as formal or as festive as you like. Family and friends can celebrate it with you, or you may prefer to observe it independently.

Read also: How to Celebrate Litha

On the first of three annual harvest festivals, pagans celebrate by thanking Earth for its bounty. The Irish God Lugh is celebrated in a gathering called “nasad”, hence the name Lughnasadh. This sabbat is sometimes called by its Old English name hlāfmæsse (loaf mass) or simply Lammas. It’s a time of giving thanks to the Earth for providing us with so much abundance.

One of the two pagan Sabbats is associated with a specific God or Goddess – the other is Imbolc or Brigid’s Day. The festival of Lammas is celebrated annually on August 1st, approximately halfway between Litha and Mabon, the autumnal equinox.

This festival can be celebrated in many ways. No matter how informal or festive you wish your celebrations to be, it is up to you. There are many ways to celebrate. You can celebrate it with family and friends, or you can be more introspective and observe it on your own.

Read also: How to Celebrate Lughnasadh

Observed on fall equinox, Mabon is one of the four Lesser Sabbats. Modern pagans continue to celebrate the Earth’s abundance and the yearly harvests resulting from its abundance, as well as its ideal balance between day and night during the second of their three annual harvest festivals. Because this Sabbat is about showing gratitude for the gifts of the Earth, it’s also called Pagan Thanksgiving.

Mabon gets its name from a prominent figure from Welsh literature and mythology, Mabon ap Modron, although the sabbat itself has little to do with the myth. Mabon is a festival of thanksgiving to the Earth for providing us with such a bounty. You can incorporate it into many aspects of your life. Depending on your preference, you can make your observances informal or festive.

Pronounced sah-win, this is one of the four Greater Sabbats and one of the most popular ones. It is observed annually on October 31st, approximately halfway between Mabon and Yule. Some Wiccan traditions consider Samhain an essential sabbat, and many see it as the Pagan New Year.

This sabbat marks the end of the harvest season as the year’s third and last harvest festival. We are in the midst of the last of the year’s entirely harvested produce, and the Earth is preparing itself for the dark part of the year. During Samhain, Pagans give Earth a final thanks for her gifts. In addition, it is a time to reflect, practice divination, celebrate with friends and family, and honor ancestors who have passed on.

A much smaller number of Pagans regard Samhain as one of only two major holidays, the other being Beltane. On the Wheel of the Year and in its observances, Samhain is directly opposite Beltane. Beltane marks the beginning of the light, half of the year, and the beginning of new life. Samhain, by contrast, marks the dark half of the year, which is characterized by the final harvest.

In Wicca, the narrative of the Wheel of the Year traditionally focuses on the sacred marriage of the God and Goddess and their duality, symbol of light and darkness and all polar opposites. You should know that there is a second wheel of the year which focuses on the lunar cycles, called Esbats.

Keep browsing this website to find more printable pages and Join Spells8 to celebrate the sabbats with us!