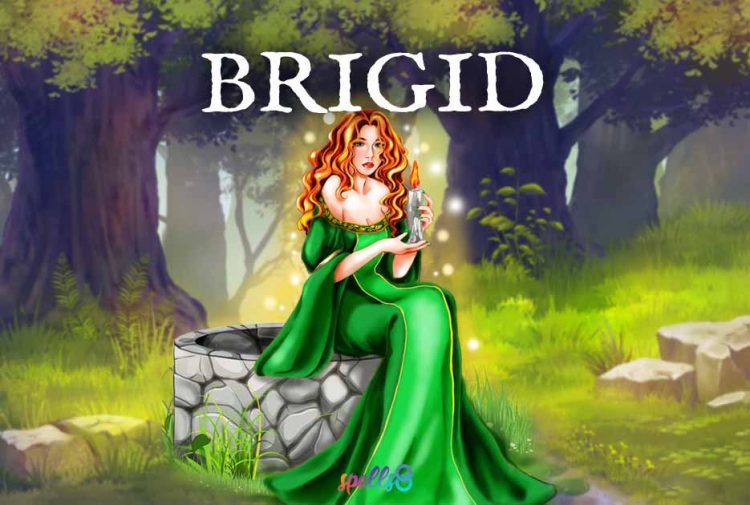 Of the many Goddesses in Irish tradition, Brigid is one of the most well-known. Pagans know her as Great Mother Goddess of Ireland, and Christians as a Saint Brigid (Brigid of Kildare), providing a beautiful bridge between beliefs and practices.

With this energy, Brigid brings the remembrance of our Oneness and is an awesome affirmation of the Eternal Essence of the Divine Feminine. For Wiccans and Neopagans, Goddess Brigid is a positive symbol of love and life, so many turn to her in their time of need and use her power to create more happiness in their lives. Let’s explore how to worship Brigid as a Goddess in modern practice.

Brigid is also known as Brigit or Bríg (and sometimes spelled Brighid or Brid). She is the Irish Goddess of fertility and spring. She has associations with poetry, the arts, and divination. The Goddess Brigid is also said to be the Irish equivalent to the Greek Goddess Athena.

The best way to connect with Brigid, like any goddess or god, is through her mythology, epithets, and symbols. Here’s a summary of the most important information about the Goddess and how to worship Brigid in your personal pagan practice.

Brigid is sometimes identified with the goddess Danu, the mother of the Irish gods by whom they are called Tuatha Dé Danann, that is, the People of the Goddess Danu. Goddess Brigit is the daughter of The Dagda, father or king of the Gods, and according to some versions, daughter of The Morrígan.

She is the wife of Bres, son of Elatha, who is half Danaan and half Fomorian (another supernatural race in Irish mythology). Bres is the father of Brigid’s son Ruadan, a blacksmith.

In her oldest incarnation, her name was Breo-saighit, “Fiery arrow”, and she’s also been called The Flame of Ireland. Legend has it that when Brigid was born, a tower of flames came out of her dwelling and reached the heights of the heavens. Her birth, which occurred at dawn, gave the impression that the house was on fire.

Brigid is considered a Triple Goddess, yet many references distinguish Brigit differently than the traditional Triple Goddess aspects of Maiden, Mother and Crone. Rather Brigid is frequently referenced having three sister selves with three distinct roles, Lady of Healing Waters, Goddess of the Sacred Flame and Goddess of the Fertile Earth. These roles are then multiplied through Brigid’s vast and varied responsibilities, which may correspond to other Celtic Triplicities.

With the arrival of Christian monks in the British Isles, the goddess Brigit was identified with St. Brigid of Kildare, who became one of Ireland’s patron saints. A sacred fire burned in Kildare reaching back into pre-Christian times. Scholars suggest that priestesses used to gather on the hill of Kildare to tend their ritual fires while invoking a goddess named Brigid to protect their herds and to provide a fruitful harvest.

The legend of the Goddess Brigid makes her a key figure in pagan beliefs. She is adored and revered for her caring nature. From her parents, she inherited a variety of desirable traits such as magic, the ability to control the weather and fire, healing, fertility, and clairvoyance.

As a healer, she is said to have the ability to cure all manner of illnesses and provide the right remedies with her energy. She is mentioned in Irish folklore in several stories and is still celebrated to this day.

Brigid’s Cross: Made of reed or grass, this geometric cross is commonly believed to be a Christian symbol, but its origin is much older. These crosses were traditionally woven during the pagan feast of Imbolc, Brigid’s festival, to announce the arrival of spring.

The cross is left on the altar throughout the night of Imbolc for the Goddess to bless. The next morning it is hung at the front door of the house to protect the home from fire and evil. Other appropriate places are above the hearth, or in the kitchen, places ruled by the fire of the Goddesses of the Home.

Eternal Flame: With her flaming red hair and association with fire, she is often symbolized by a flame. As she is considered to be a fire Goddess, many of her worshippers use this element to pay homage to her. By lighting a white candle and invoking the element Fire you can feel her presence and bring the symbol of the Goddess Brigid to life.

Serpent: Another popular symbol for the Goddess Brigid is the serpent. It represents renewal and the beginning of spring. When you uncover the deeper elements of this symbol it is also tied to divinity.

Wells: Brígid served as the goddess of water and maintained dominion over rivers and wells. Two of her most famous holy wells were:

In addition, Brigid is also symbolized by Spring. As such she represents new beginnings and the creation of new life. It is one of the reasons why she is still celebrated to this day. During the springtime, it is easiest to connect with her, she is all around nurturing and giving life to plants and animals.

Titles and Epithets of Brigid

The meaning of the name Brigid is ‘Exalted One’. Like other goddesses, she isn’t usually addressed by her name alone, but by her titles:

She is also known by other names such as the following:

Signs that Brigid is Calling You

Brigid is a loving and nurturing Goddess. The signs of a deity contacting you are never obvious at first, so feel free take the first step.

See examples of working with Brigid in the Infinite Roots Coven:

How to Worship Brigid

The influence of the Goddess Brigid has been translated to many different cultures and spiritual practices across the world. She is the Goddess of Spring so she is worshipped especially around that time of the year. As she rests during the winter, it is important to bring in the new season and celebrate her.

As spring approaches make sure to clear out the old to invite in the new. Clean your home and shift any negative or limiting beliefs that you may hold. This will lure her to you and help to support your development and connection with her.

There are several ways that you can craft offerings for Goddess Brigid. These homemade gifts are pleasing to her and will help you develop a relationship with the nurturing deity.

The Brigid’s cross is used as an offering to the Goddess. It is traditionally made from rushes and woven together to create the symbol. When a person makes a cross it shows their dedication to Brigid. They are typically placed over doorways and windows to protect the home from evil spirits and bad energy. It is said that Brigid weaved this form of cross when she watched over her father while he was on his deathbed.

Another offering is called Brigid’s doll. This pagan custom will bring light and fortune into your life. Brigid’s dolls are created on Imbolc/Candlemas and are displayed in makeshift beds next to a fireplace. They are made from dried raffia and tied together with burlap ribbon. Read more about offerings to Brigid here: Offerings at Home.

Invocations and Prayers to Brigid

There are many beautiful ways of praying to Goddess Brigid. Here is a prayer to invite Brigid into our ritual, written by Megan Black, member of the Infinite Roots Coven, for Spells8: