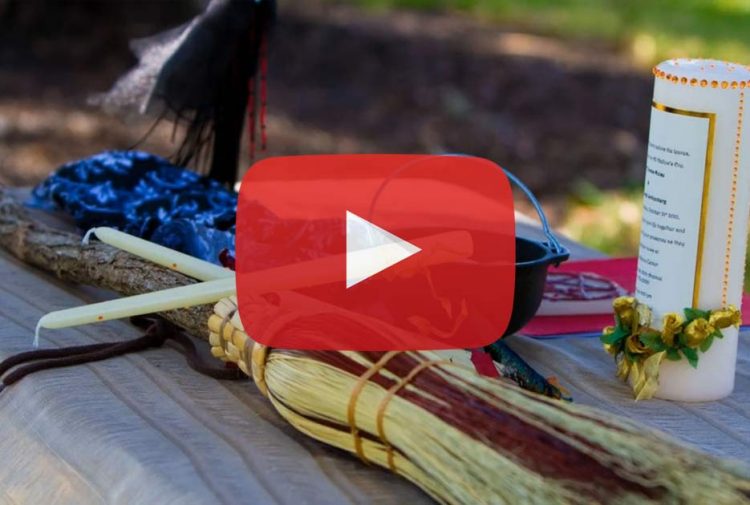 What do Wiccans believe? There’s a set of Wiccan ethics and values that most practitioners follow. In this 6-minute long video, you’ll learn about the fundamental code of conduct for Wiccans. We will learn more about the 13 principles of Wicca on Day 2 of this free video course.

Once you’ve watched this video, go back to Day 1: New Moon, New Witch to complete the Quiz about Day 1.

A singular understanding of a philosophy or an overarching set of values followed by all Wiccans does not exist. While there are a large number of Wiccans that follow a prescribed tradition or path through initiation into a coven, there are just as many that do not exclusively follow any single tradition and are often not initiated. These eclectic Wiccans create their own spiritual path through an amalgamation of beliefs and rituals from a variety of different religious traditions. However, even though the belief structures may vary from group to group and individual to individual, there is a basic philosophy that is generally regarded and a set of values that are often followed by Wiccans.

Duality of the Divine

The basic philosophy of Wicca is that the divine is made up of both a Goddess and a God. Feminine and masculine aspects of the divine are also believed to be reflected in nature. The male/female split is a central tenet of Wicca. While various adaptations of Wiccan practice have incorporated pantheons such as ancient Greece, Rome, and Egypt, the focus of Wicca remains on the duality of the divine.

Wiccans honor the duality of the divine through understanding that while reality is split into the male and female aspects, divinity is ultimately united as an interconnected whole. The divine exists and operates within our universe and is beyond the range of our physical human experience.

While not all Wiccans place an emphasis on magick or use it in the same capacity, all Wiccans do believe that magick exists. Magick is a central part of the framework of Wicca. It is often defined using this quote from Crowley, “Magick is the Science and Art of causing Change to occur in conformity with Will.” (Book 4, Liber ABA, Magick in Theory and Practice)

Magick is connecting to the Universe and energy force that binds all living and non-living entities together. It is the intention that is infused in the magickal working. Wiccans believe that magick is not greed or power, rather it is force by which what can be imagined can be created and become real.

To Wiccans, nature is an extension of the divine. The God and Goddess are both celebrated in conjunction with the natural cycles of the seasons as well as the individual cycles of birth and death. Communion with nature is central to the spiritual philosophy of Wiccans. Humans are regarded as a part of nature and not separate from it as our dominant culture often purports. The rhythms of nature pulse with that of the human life course as the divine is woven into its very fabric. Being attuned with nature means believing that all of nature is sacred and should be held in reverence rather than dominated.

All Paths are Blessed

Wiccans see their chosen path as only one of a myriad of possible spiritual paths available. While many other religions espouse a single path to enlightenment, Wiccans believe that all paths that lead to the divine are equally acceptable and blessed. They believe everyone has the right to find their own way as long as it does not hurt others in the process. Consideration for others as well as oneself is essential to living a positive and just life.

Personal Connection to the Divine

Whether working with a coven or as a solitary practitioner, the connection to the divine is a very personal process. Maintaining, building, and sustaining a relationship with the divine is an individual responsibility. Through each ritual or spell, meditation or divination, connecting with the Goddess or God is a truly personal experience.

The word ‘rede’ comes from the Old English word ‘roedan’ which means to direct or guide. At some point in the early 20th century, the Wiccan Rede was written down but the source is unknown and the original time period is often disputed. Regardless, the Wiccan Rede simply states, “Do what ye will, lest it harm none.”

It tells the follower that they are free to engage in any behavior they choose as long as their actions do not harm themselves or others. Harm is often thought of as only physical damage, but in this case, harm refers to any physical, emotional, or psychological damage to the self, an individual, or a group of people.

Also known as the Law of Return or the Threefold Law, the Rule of Three states that all the good and all the harm a person does to others will return threefold in this life. Every magical act sent out into the universe will return to the witch three times over. Many people think of this through the Hindu or Buddhist lens of karma. But karma is the sum of a person’s actions in a single lifetime to determine their fate in the next incarnation. However, the Rule of Three applies to a single act within this lifespan and comes back during this existence, not the next one.

The Rule of Three is interpreted differently by each Wiccan practitioner. One interpretation is that all the good or harm is returned back to the sender at a magnitude of three. While others interpret the number three to mean that the three realms of an individual’s life will be impacted by their actions and intention. These three realms are the physical, emotional, and spiritual. Many Wiccans believe in a combination of these two interpretations. However, keep in mind that the Rule of Three is not followed by all Wiccan traditions.

Ultimately, the Rule of Three is based on the concept of whatever energy, positive or negative, put into a situation will reflect back into life. Or simply, whatever you put in, you get back out. The Rule of Three merely serves to reinforce that there are consequences to all actions.

These are the general values and beliefs of Wiccan philosophy. While each tradition or coven may have their own variations on these values, many of them hold true for the majority of Wiccans. These concepts encapsulate the belief system of many Wiccans, but are in no way representative of all adherents.