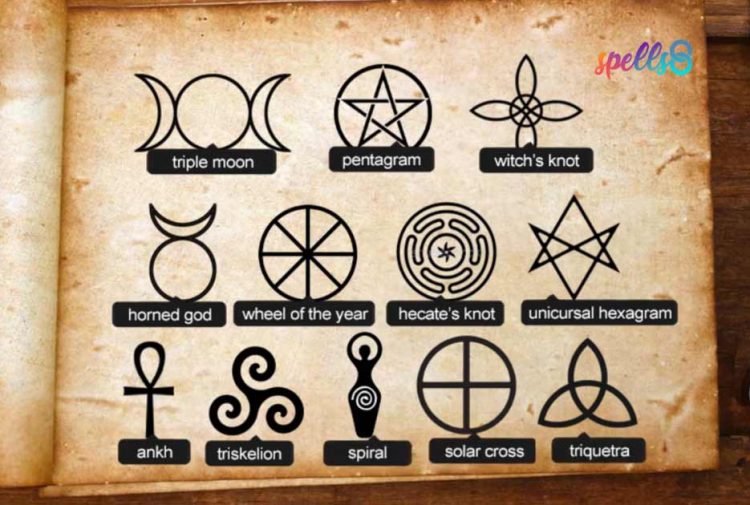 Just like any other religion, Wicca has its own religious symbols which carry spiritual meanings and sacred power. You have likely seen some of these pictures before, so here’s an opportunity to learn their meanings and origins.

From the Horned God and Triple Moon Goddess (we’ll learn more about these in Day 4: Wiccan Deities) to the Witches Knot, these Wiccan symbols have been used for protection, power, and more. Their origins and history can be traced back to the ancient Greek, Irish, and even Hindu traditions.

How to use these Wiccan symbols?

While many of these symbols are used by Wiccans in amulets (protection) and talismans (good luck, love, etc), their origins date back hundreds or thousands of years before Wicca existed.

What’s next? Go back to Day 3: First Circle, or continue to the next lesson: Day 4: Wiccan Deities.

Wiccan Symbols and Their Meanings

A list of witch symbols and what they mean:

The five-pointed star or Pentagram is by far the most easily recognizable wiccan symbol. Each point represents one of the five alchemical elements: air, water, fire, earth and spirit. It is said that the upright pentagram symbolizes the triumph of the spirit over matter and earthly desires; while the inverted pentagram symbolizes personal gratification over spirituality.

The Pentagram is used to invoke or banish forces, and also as a shield against psychic or physical danger. It can be used as a protection symbol or a lucky charm, but it’s generally considered sacred by Wiccans and other Pagans so it’s best to wear it with respect.

The triple moon is a symbol of the Goddess that represents the Maiden, Mother, and Crone. These are considered to be the three stages in a woman’s life, and are represented by the waxing, full, and waning moon. This symbol is also associated with feminine energy, mystery and psychic abilities.

Spirals have been primary Goddess symbols since the late Paleolithic, when they were marked on tombs. They represent the Divine Feminine, the movement of creation, death and rebirth.

The triskelion or triskele is a symbol used primarily by groups with a Celtic cultural orientation which may have its origin in an ancient Solar symbol. It can represent a variety of triplicities, such as the three realms of body, mind, and spirit; the threefold law; or even the Christian Trinity.

The Horned God is the symbol of the masculine aspect of the Divine. He is associated with nature, wilderness, sexuality and hunting. In traditional Wicca, the Horned God and the Triple Goddess are seen as equal and opposite in gender polarity. Together, they make up the dual aspect of the Wiccan pantheon.

Hecate is the Greek goddess of magic, witchcraft and crossroads. She is often depicted as a woman with three faces and she rules the Underworld. The symbol shows a labyrinthic serpent which represents rebirth, surrounding a spiral as a symbol of the emanations of divine thought. These are channels which connect the material world with the celestial world.

This symbol represents the cycle of seasons which serve as a calendar for Wiccans. The seasons are divided by 8 holidays called sabbats. These are celebrations that honor the particular qualities of each time of the year and the relationship of followers with the Divinity.

The Solar cross has many different representations and it’s probably the oldest religious symbol in the world, appearing in Asian, American, European, and Indian religious art. Consisting of an equilateral cross inside a circle, it represents the solar calendar, each arm being one of the solstices and equinoxes.

Also known as the Trinity knot, it has many different meanings. In Wicca, it can represent the Law of Threefold Return, the power of the number three, or the threefold nature of the Goddess. The Celtic Christian church used it to represent the Holy Trinity, but other cultures used the symbol too and each attached its own meaning to it.

The unicursal hexagram is a six-pointed star that can be traced in one continuous line rather than by two overlaid triangles. This is significant in ritual magic when invoking and banishing hexagrams must be made. It is typically associated with the teachings of Thelema or the Golden Dawn.

The Witch’s knot is a protection symbol in folk magic. It represents the knot magic practiced by witches during the middle ages, and was used as a charm against witchcraft, usually carved on doorways of homes and stables. It can be a powerful protection amulet as it symbolizes the binding powers of witches and Magic.

The ankh is an ancient Egyptian hieroglyphic symbol that represents the word for “life” and, by extension, as a symbol of life itself. It was widely used as an amulet in Ancient Egypt and as a symbol of fertility. The ankh can represent the creation of new life or the key to unraveling the mysteries of life and death.

Runic alphabets were used to write various Germanic languages before the adoption of the Latin alphabet. Ancient tribes used them to name places and things, attract luck and fortune, provide protection, and magically divine the course of future events. Because runes were carved onto stone or wood, they were formed with straight lines only.

Greek philosopher Empedocles was the first to propose four elements, fire, earth, air, and water. He called them the four “roots” which make up everything else. The fifth element is known as aether or spirit. These five elements are invoked during many magical rituals, notably when consecrating a magic circle.

While these symbols have various origins and meanings, Wiccans attach their own personal significance to them and all can be used as symbols of power and protection in your Craft. Keep watching to learn how to bless an amulet or pendant with a Wiccan consecration ritual.

Previous Topic
Back to Lesson
Next Lesson