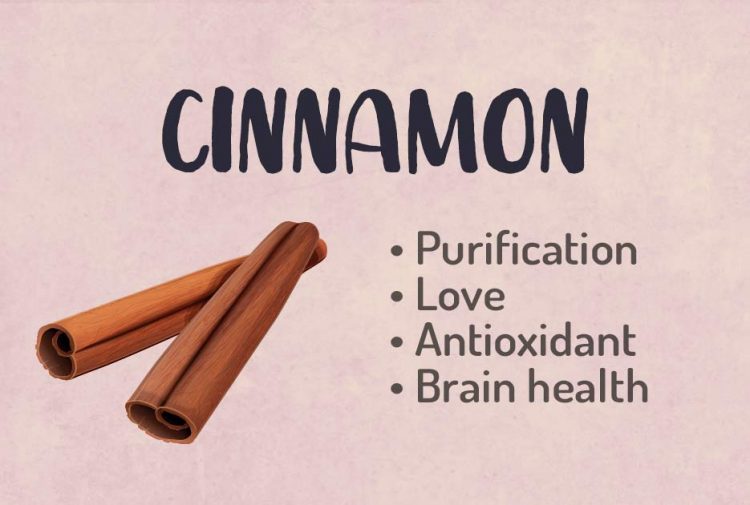 Also known as Cinnamomum verum, most cinnamon today is derived from the Cassia family of plants. Besides being widely used in the preparation of food and desserts, Cinnamon has many medicinal, esoteric and Magical properties.

Cinnamon is obtained from the cinnamon tree, which is native to Sri Lanka, but it is also grown India and other parts of the world.

Cinnamon is typically burned as incense to invite higher spiritual powers, to promote the healing of the respiratory tract, and also as an aphrodisiac and in love spells.

Sachets with cinnamon, and infusions (love potions) can be made with these same purpose. Cinnamon is mixed with other essences or fruits to create a powerful aphrodisiac for attraction and sexual arousal.

Hang a cinnamon stick near the main entrance of the home to keep negative energies away. To invite financial prosperity, a cinnamon stick or clove can be carried in the wallet or purse. The same can be done at the cash register of a business.

Uses of Cinnamon in Herbal Witchcraft

Found in our kitchens and sprinkled on morning toast, cinnamon (Cinnamomum zeylanicum, and Cinnamon cassia) has a fascinating history of both culinary and magical importance. This Asian evergreen is a member of the laurel family. It has leathery leaves and brown, papery bark with yellow flowers blooming in the summertime. Cinnamon is taken from the inner bark and most often made into capsules, teas, and extracts.

For hundreds of years, Arabic peoples transported cinnamon to Europe through cumbersome land routes. To keep demand up for this rare and exotic herb, merchants told tall tales about the mysterious origins of cinnamon and the death-defying peril it cost them to harvest the sticks.

Cinnamon is often used in incense. It has a warm, comforting smell that when burned can sanctify an object or area. For this reason, cinnamon is used to aid in healing spells. It has been directly burned in the sick rooms of patients to help aid healing in general.

Ancient Egyptians used cinnamon in their sacred embalming process and it actually smelled good!  As their god-king leaders were sent into the afterlife, it was important for them not to smell like dead bodies.  It was a main ingredient in the herbal mixture used to fill body cavities during mummification and cinnamon was integrated into the embalming fluid to ensure the odor of the death was masked.

Due to its infatuating scent, cinnamon incense makes for an energetic space for spell working that is enhanced by the power of the sun.  Cinnamon’s aphrodisiac qualities come from being associated with fire and air elements. Zesty cinnamon is wonderful for spells involving love. In magickal workings, it enhances the communication skills needed to make love spells effective to your intended lover.

Antioxidants protect against oxidative damage caused by free radicals. Free radicals are toxic byproducts of metabolism. They cause damage to living cells and tissues through a process called oxidative stress. Cinnamon is a powerful antioxidant because it is loaded with polyphenols that help combat cell damage1. Cinnamon has outperformed superfoods such as garlic and oregano with its antioxidant properties2.

The progressive loss of brain cell function and structure characterize neurodegenerative diseases. Two common types of neurodegenerative diseases are Alzheimer’s and Parkinson’s disease. In a recent study, two components in cinnamon inhibited the build up of the protein, tau, in the brain3. The buildup of tau is linked to Alzheimer’s disease. In another study using mice with Parkinson’s disease, cinnamon helped to protect neurons and improve motor function4.

Cinnamon may decrease blood sugar. Taken in large doses it might harm the liver. Do not apply oil to the skin as it can cause irritation and allergic reactions.

Cinnamon is one of the most delicious and healthiest spices on the planet and fortunately for us, cinnamon is now widely available. Cinnamon may no longer be considered a “luxury” spice, but it is certainly a powerful ally to your health and magical spells.