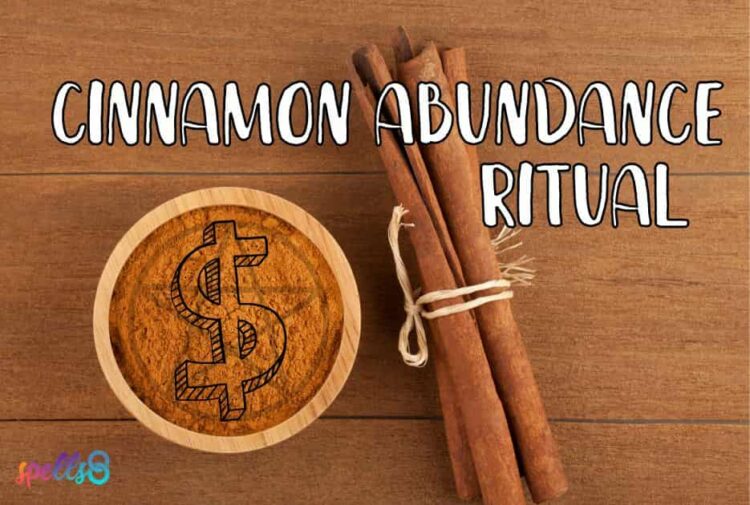 Do you want to call abundance, good luck, and prosperity into your life? Blowing cinnamon through the doorways of your home is a simple yet effective magickal solution that won’t break the bank or take up too much of your time. Not only is it easy to source the ingredients from any grocery store, it’s likely that you already have them at home!

So pull out those jars of ground cinnamon and read on for more details about why we blow it into our doorways and what this means. We’ll walk you through how to perform an empowering spell that will bring exciting positive shifts into your world.

Why should you blow cinnamon into the doorway of your home on the first of the month? The answer may surprise you!

The tradition of blowing cinnamon into your door on the first of the month is one that has gained popularity over the last few years. It is believed to bring good luck and fortune to those who participate in it.

Blowing cinnamon into your door is also a fun way to start the month. It’s a simple act that takes only a few seconds, but it can really help to set the tone for the rest of the month. Plus, performing a monthly ritual gives us a sense of structure as well as something to look forward to each month. It’s a great way to incorporate magic into the mundane!

Cinnamon corresponds with abundance, prosperity, protection, and success. It is said to help us be more in tune with our spirituality, and grants blessings of wealth, love, and power to those who know how to use it.

For hundreds of years, cinnamon has been a natural part of Chinese medicine. Believed to have restorative and healing properties, this spice was incorporated into traditional treatments for all kinds of ailments.

It’s no wonder cinnamon became one of the top seasonings at the dawn of the spice trade: coveted for its potent healing abilities and its robust scent and flavor, cinnamon was also known for its alluring metaphysical benefits. The price of this spice was further driven up with exaggerated tales of it growing only in the deepest, snake-filled dens.

How To Perform A Cinnamon Abundance Ritual

A cinnamon abundance ritual is an incredibly potent and easy-to-perform magickal working that can help manifest wealth and prosperity into your life. By harnessing the special qualities embedded within this herb and combining it with intention and visualization, you can work powerful magick with surprising results.

“Abundance and prosperity flow swiftly to me,
This month invites blessings for my home and family.”

This is just an example, so feel free to customize your affirmation as you see fit! Just be sure to write it in the present tense, as though the blessings are already yours. That’s because they are! Saying something like “I will receive…” is likely to come true – but who knows when? So give it a definite time frame (such as “this month”) or tell the universe that you already own it and abundance will find its way to you.

When Is The Best Time To Bless Your Home With Cinnamon?

Many witches choose to perform this ritual on the first day of each month, which is a great way to ensure that you are inviting abundance and blessings into your home on a regular basis.

Alternatively, some practitioners do this on the day of the New Moon, choosing instead to practice according to lunar months. If that is a cycle that you feel more connected to (or if you’re unavailable on the first of each month) – then that’s perfectly fine!

Others may choose to perform this ritual the day after the New Moon. Doing so harnesses the energy of the waxing moon, which is said to aid in drawing in blessings or increasing the effects of spellwork.

You can incorporate this ritual as a New Year’s tradition to invite prosperity and warmth into your home for the coming year, or even practice it upon moving into a new residence. Blowing cinnamon into your doorway is such an easy way to incorporate magic into your everyday life, so feel free to adapt this practice in any way that feels right to you!

How To Customize Your Ritual

If you’d like to personalize this spell or kick it up a notch, blend your cinnamon with herbs or spices that correspond with other blessings that you wish to invite into your home. You can even create custom blends for specific months or to celebrate holidays – the possibilities are endless!

Try to avoid ingredients like sugar which may attract insects or pests into your residence. If you’re still lost, here are some great combinations to get you started:

The perfect combination to invite blessings in while warding away negativity from the home, cinnamon and basil are two of the most potent – and easily accessible – spices that you can use to bless your home. Blowing cinnamon and basil into your doorway is a great ritual for practitioners who need extra protection or would like to exercise a bit of caution when inviting new energy into the home.

Perform this ritual with both cinnamon and rosemary to ensure you’re cleansing your home of any negative energy while inviting in prosperity. This can help to clear up stagnancy and other blockages that would otherwise prevent your ritual from working. As an added bonus, rosemary is known to help repel fleas, lice, mosquitoes, and other unwanted insects.

Looking to bring an extra boost of strength, happiness, and vitality into your home? Give this ritual a try! Step outside with cinnamon and oregano in hand and then blow the ingredients through your doorway to welcome blessings of abundance and cheer.

Don’t see a ritual that fits your needs? Use an item such as bay leaves which can be programmed to fulfill your specific intention. If you wish, write your intention on a bay leaf before crushing it, then perform the spell as stated above. Be sure to adjust your affirmations accordingly!

Believe it or not, blowing cinnamon into the home is not just a metaphysical practice but also has household benefits! Sprinkling cinnamon throughout your house is also a great way to keep out mice and rats, both who hate its potent smell. Cinnamon is also believed to keep ants away – another great reason to sprinkle it throughout your home!

Creating an abundant life doesn’t have to be complicated. Sometimes the simplest actions can create powerful shifts. Try blowing cinnamon into your doorway once a month and see what effect it has on your own sense of abundance. What other monthly rituals do you incorporate into your practice?

Also known as Cinnamomum verum, most cinnamon today is derived from the Cassia family of plants. Besides being widely used in the preparation of food and desserts, Cinnamon has many medicinal, esoteric and Magical properties.

Money spells are nothing new. These practices go back to ancient times, when kings and queens would get advice from oracles and clairvoyants to make decisions that would impact their economies.

Witching in the New Year

An older post, but still relevant! Practicing magick for the new calendar year can be a great way to kick off the year in the right mindset. The type of spell is up to you, but I find the most common spells done in the new year include attracting prosperity, new love, and kicking bad habits. So, here is your quick guide for witchcraft to ring in a new year.