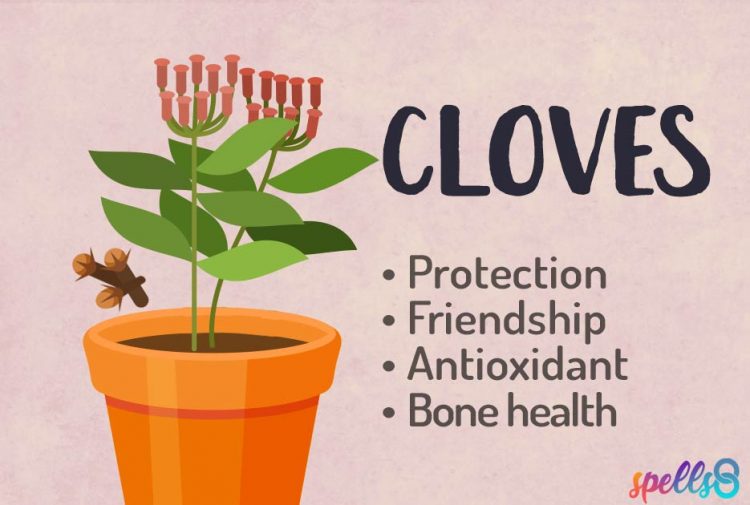 This quintessential sweet spice is not only used in baked goods, it is an ingredient widely used in magic and esotericism.

In Folk Magic, cloves are used as a means of protection. They help to remove negativity and ward off evil presences from our surroudings.

Among their other magical properties, cloves are a great natural purifier that will always guarantee a great energy in our living spaces. They’re also an essential ingredient in handcrafted bags or amulets intended for love and friendship.

The smell of cloves might make you think of cute little gingerbread men cookies or baked ham, but they have been used for more than just cooking for thousands of years. In fact, cloves were traded by the Romans and Chinese. This evergreen tree’s (Syzygium aromaticum) small flower buds have even sparked wars! The Dutch destroyed groves of cloves wherever they went on the Spice Islands in order to drive out competition and spike prices. The native Indonesians had enough and decided to revolt against them for killing their precious trees used to honor their deities. You can simmer cloves in tea or use them whole or ground in your cooking. Either way, this aromatic spice will provide many important magickal and health benefits for you.

It is said that to bring riches your way, cloves should be burned. Their scent when crushed or burned provides stimulation and prosperity to the magickal practitioner. They raise the vibrational energy of an area to attract good luck. Historically, cloves have been used to protect children which might be why they are often used in baking and cookies. Children love sweet treats and what better way to magickally protect them than to include a bit of clove in a recipe. Cloves are also used during purification rituals and exorcism in many parts of the world.

Cloves are closely aligned with the planet Jupiter and the element of fire. As a masculine herb, they are powerful and strong. Because cloves raise the vibrational energy of an area, they are often used to bring a sense of kinship to a gathering. They help to keep good friends close and ward off enemies. Specifically, they ward off and stop damaging rumors or unwanted gossip. Seven cloves placed in a bag and given to a friend will keep the friendship strong and enhance its positive qualities.

Cloves are rich in antioxidants and also contain lots of important vitamins and minerals. Oxidative stress leads to an increase in free radicals which is a major contributor to chronic illness. Eugenol, the antioxidant found in cloves, helps to reduce oxidative stress even more than vitamin E.

Compounds found in cloves have been shown to increase and promote overall liver health. Most notably, eugenol helps aid in liver function as it contributes to reduced inflammation and decreased oxidative stress. Eugenol has also been found to reduce scarring in the liver from cirrhosis. Be very careful with eugenol as it is toxic in high amounts and can have the reverse effect of creating liver damage.

Low bone mass is a major problem for older adults and often leads to osteoporosis. This can cause bones to become brittle which increases the risks of fractures and breaks. Compounds in cloves help to preserve bone mass thus reducing the risk of osteoporosis and strengthening bones. It isn’t just eugenol that helps with bone mass, the high levels of manganese also help with bone health by increasing bone mineral density and growth.

Cloves often act as an irritant. People with sensitive stomachs may have difficulty tolerating cloves. They can also affect the central nervous system, so pregnant women should avoid using cloves medicinally or as an essential oil.