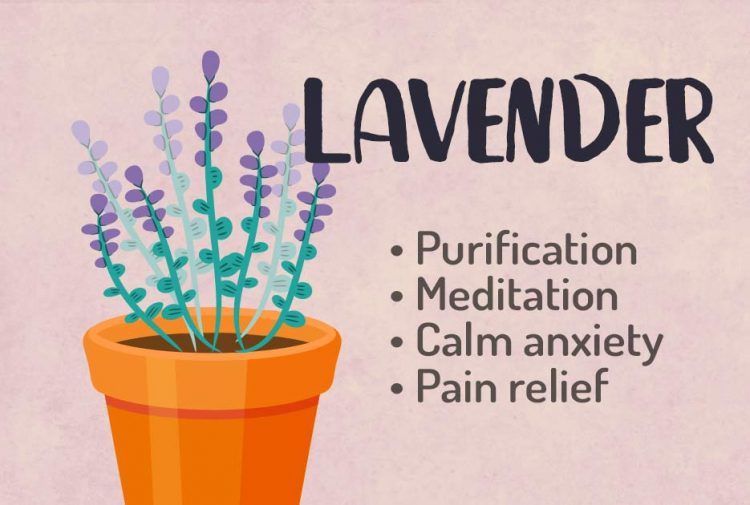 Lavender is a beautiful plant, often used in the cosmetics industry for its pleasant aroma. Its name comes from the Latin word lavare, it has antiseptic properties and it helps to heal small wounds such as cuts, scratches or small insect bites.

Place lavenders in your living areas and bedroom, as it’s an excellent protectors and purifier of energies, with calming properties.

Ancient Romans used it in rituals and gave it as offerings to the deities because they knew of its healing properties. For their part, the Greeks made oils from lavender to wear as perfume.

Lavender can be used in a relaxing bath, in Florida Water or as a calming potion before bed. It also enhances meditation and sleep. These spells with lavender invite good energies to our body and home:

Uses of Lavender in Herbal Witchcraft

It is no wonder that lavender (Lavandula angustifolia) has been utilized not only for medicinal, but social and spiritual purposes across many cultures for countless years.   A member of the mint family, this alkaline plant has antiseptic and astringent properties. Native to the Mediterranean region, it is also grown all over the world from Texas to India as it prefers sunny, dry climates. The delicate purple flowers and delightful scent of this small shrub appeal to our physical senses while lavender’s chemical and medicinal properties appeal to our intellect.

Lavender and its uses can be traced back to Roman soldiers, who used the wild-growing herb to wash their clothes and perfume their bathwater. Medieval washer women were called “lavenders.” In some cultures, lavender is traditionally thrown into bonfires to drive away evil spirits or strewn on the floors of churches for a similar effect.

Magically, lavender is a masculine herb, associated with the planet Mercury and the element of air.  Practitioners often use lavender as an asperging herb, dipping the plant in water and sprinkling it around the ritual space for purification before beginning a spell.

In dried form, lavender sticks make a potent incense that brings about calmness and discourages malevolent spirits from entering into a space. Due to the association with air, lavender is wonderful when a spell is needed to sharpen the mind. Use lavender when meditating in order to relax and open the consciousness. Drinking a tea infusion or tincture made from the essential oil can relax both the mind and body.

Anxiety disorders are a category of mental health diagnoses that are comprised of excessive nervousness, fear, apprehension, and worry. Anxiety disorders alter the way a person processes emotion and behaves but can also cause physical symptoms. Lavender has been successful in treating patients with general anxiety disorders1. In scientific studies, lavender has also significantly decreased anxiety in dental offices2 and test taking situations3.

Large amounts of lavender should not be consumed internally by pregnant women or nursing mothers. Do not take lavender if you are currently taking chloral hydrate, barbiturates, or CNS depressants.

Traditional uses of lavender are being further explored scientifically but methodological and oil identification problems have severely hampered the evaluation of the therapeutic significance of much of the research. Issues in plant identification need to be resolved before an accurate picture of the benefits of lavender can be understood. But for now, explore the many uses of lavender in your herbal magick, and let your spirit be uplifted!