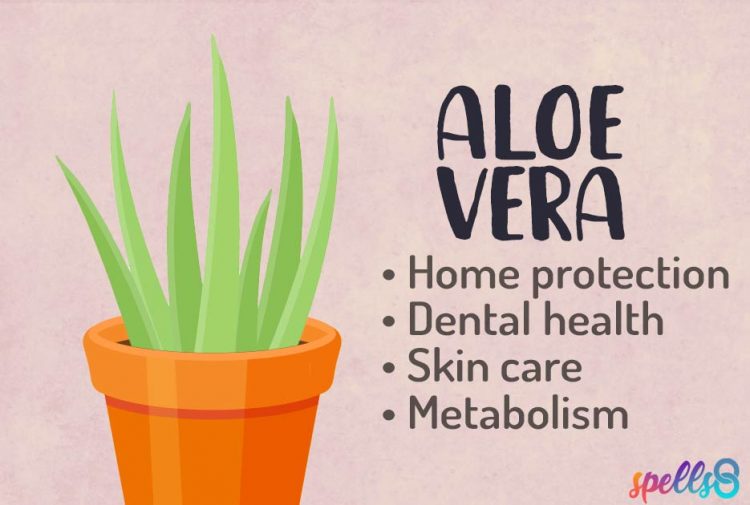 Aloe vera is a wonderful plant, celebrated for its many uses in health and beauty, but it also has plenty of uses in Green Magic, fostering good luck, prosperity and banishing envy and negativity.

This plant has been used in medicine for hundreds of years. Its healing properties were known by the ancient Egyptians, who believed that it promoted immortality and used it to embalm their dead.

If you want to attract money into your life or get a better job, you should have an aloe in your house. As the plant grows, your finances will improve too.

This easy Wiccan ritual is for eternal beauty and attraction. You will need a red candle, a mirror and some essential oil such as Aloe vera. Click the image to see the recipe.

Origin: An evergreen perennial, it originates from the Arabian Peninsula, but grows wild in tropical, semi-tropical, and arid climates around the world. It is cultivated for agricultural and medicinal uses.

Cultivated worldwide, aloe vera (barbadensis miller) is most known for being applied to the skin, especially for burns. Most people are familiar with the aloe gel, the sticky substance inside of the leaf. But aloe vera is also used in food as a flavoring, cosmetics, and herbal remedies. The earliest record of aloe vera comes from an Egyptian medial record in the 16th century BCE and even Cleopatra herself used aloe in her beauty routine. This succulent plant with triangular, fleshy leaves was believed to originate in the Sudan. The gel is clear and found within the leaves while aloe latex come from under the plant’s skin and is yellowish in color.

Throughout the Middle East, aloe vera was hung over doorways as it was believed to provide protection and ward off evil spirits. Not only does it protect those inside the home from any malicious actions, but aloe vera is also known to protect against accidents. This is why many people place an aloe vera plant at the front of their house or on a windowsill as they are able to dispel negative energy. To protect the home, dab some gel over each exterior doorway. But it doesn’t just help dispel negativity, in Mexico, aloe vera is made into wreaths that are hung on doors to bring lucky influences into the house.

Aloe vera in tooth gels is as effective as, or even better than toothpaste in controlling cavity-causing oral bacteria. Aloe latex contains anthraquinones which are compounds that actively heal and reduce pain. Aloe vera mouth rinse reduces the buildup of plaque on the teeth by killing the plaque-producing bacterium Streptococcus mutans and the yeast Candida albicans.

Most commonly used as a topical medication, aloe is generally rubbed onto the skin. In the treatment of second-degree burn wounds, aloe vera helps them to heal significantly quicker than conventional medications, in fact 9 days faster!

Aloe latex is used internally to treat constipation. The compound aloin, or barbaloin, has laxative effects; however, there are concerns about the rafety issues of internally consuming aloe vera over a long period of time, so it is no longer available in the US.

Avoid aloe latex in high doses as it may cause stomach pain and cramps. Long term use may also cause kidney problems, low potassium, muscle weakness, blood in the urine, and heart issues. Do not use aloe vera if pregnant or breast feeding as it has been known to cause birth defects and miscarriage. Aloe vera is not recommended internally for children under 12. Those with diabetes, should monitor their blood levels closely when using. Individuals with Crohn’s disease, ulcerative colitis or obstruction should not take aloe latex due to it being a bowel irritant. Those suffering from hemorrhoids should avoid aloe latex. People with kidney problems should never take aloe. Do not take aloe two weeks before any surgical procedure. Consult with your doctor before taking aloe if you take diabetes medications, digoxin (Lanoxin), Sevoflurane (Ultane), stimulant laxatives, Warfarin (Coumadin), or diuretic medications (water pills).