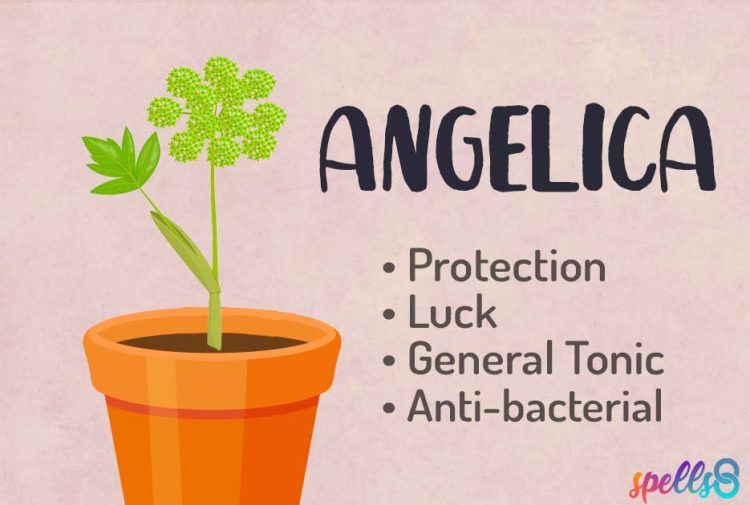 With an impressive height, Angelica is one of the tallest plants in the Umbelliferae (Apiaceae) family, growing vigorously up to seven feet in height to spread its large seeds in the air.

The Latin name Angelica archangelica comes from the story of a seventeenth century French monk. This monk said that he had a dream where the Archangel Michael, the healing Angel, told him about the power of this plant against the plague that was devastating the European population for the third time in three centuries.

Healing essential oils are everywhere in this plant: in the seeds, in the stem, in the leaves, in the root. So many qualities have been attributed to Angelica, that it would take several pages to list them all. Chinese emperors even used it as an elixir of youth.

Caution: The root is poisonous if used fresh or in large quantities.

Some women use angelica to start their menstrual periods. Sometimes this is done to cause an abortion.

This spell to bring the family together is especially powerful if done during the dark half of the year (around Samhain or Yule). This recipe is included in the Collection: DIY Witch’s Apothecary.

Thieves Vinegar is an ancient blend which has powerful antibacterial, antiviral, fungicidal, and immune-boosting effects. It dates back to the 14th century and today there are many variations of the recipe, some include Angelica, such as this one:

Some people apply angelica directly to the skin for nerve pain (neuralgia), joint pain (rheumatism), and skin disorders. In combination with other herbs, angelica is also applied to the skin for treating premature ejaculation.

This beautiful member of the parsley family is a bright glossy green which can grow up to eight feet tall. It is believed that angelica originally came from Syria, but now it can be readily found all over the world. Its uses in the ancient world are too numerous to mention as many cultures believed it could cure just about anything!

The entire plant is used for healing including the roots, stems, leave, and flowers. Each has various properties for curing various ailments. However, it was most often used to ward off the plague as it was thought to be a cure for poisoning. Angelica comes to bloom during late September which aligned with the feast day of Archangel Michael. Archangel Michael appeared before the people in a vision and explained the plant’s protective uses, especially against evil. This is how the plant became known as angelica.

It is commonly used in protection spells especially those that involve evil spirits or breaking hexes. Its power increases when used by women and it can help them defend against unwanted energies. Grow angelica around the outside of your home or keep a pot inside to protect your property. The leaves of angelica can be added to a ritual bath in order to remove a negative spell or curse. Use it to uncross yourself from any spell that might be causing you harm or bad luck.

Used as an incense during exorcisms, the smoke of the angelica plant can increase clairvoyance and encourages visions from the other realm. It can also help you find inspiration!

Whether that’s increasing your longevity or warding off illness or malevolent spirits, angelica is a very lucky plant. It is often used as a talisman when gambling, as angelica can boost your winnings and protect you from sticky situations.

A tea made from angelica helps to heal colic, gas, indigestion, hepatitis, heartburn, nausea, ulcers and other digestive problems. It stimulates the appetite which in turn increases the production of stomach acid, leading to improved digestions and less internal gas. Angelica actually kills bacteria such as E.coli and other microbes that cause gastric illnesses.

Angelica is a general tonic that strengthens the body. It improves the liver while also being good for chronic headaches and fevers. It also improves circulation by strengthening the heart and helping to push blood through the body.333

Angelica has anti-bacterial and anti-inflammatory properties which help to prevent as well as control acne. Made as a tea and then used as a face wash, angelica can be used on various skin blemishes. It can also be used to cleanse wounds and promote healing.