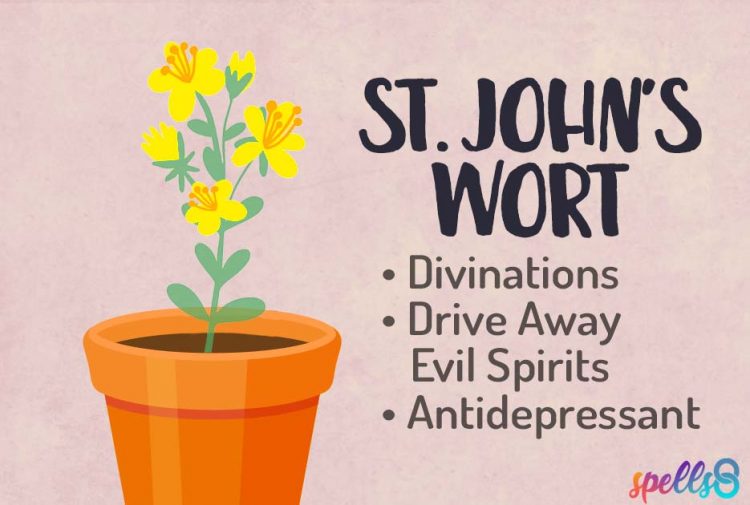 One of the best known properties of St. John’s wort is to act as a powerful antidepressant. However, St. John’s wort causes many drug interactions, so it might not be a suitable option, especially if you are taking any prescription medication.

For this reason, you should always consult a doctor when you want to take St. John’s wort.

The ancient Greek used it for burns, menstruation pain and serious diseases such as malaria. Hippocrates is even believed to have recommended this plant as an anti-inflammatory remedy.

For centuries, it was renowned for both its medicinal and protective properties, as it was attributed the power to drive away apparitions and spirits.

During the Middle Ages, it was known as ‘Fuga daemonium‘, for this same belief that it helped banish demons and forces of evil. They would burn dry bundles of St. John’s wort in churches, monasteries and homes, as they believed that the smell kept away all kinds of entities.

Hang it over doors and windows to prevent bad vibes and people’s intentions from affecting your well-being.

Origin: Europe, western Asia, and North Africa, and is widely distributed through temperate areas of the world.

Hypericum perforatum, otherwise known as St. John’s Wort, is a flowering plant with yellow or copper-colored petals. It is most commonly found in the United States and Canada where it is located on roadsides, meadows, and woods. This plant got its name because it blooms around the birthday of John the Baptist (June 24) and wort is the old English word meaning plant. Long before it got its current name, the ancient Greeks used it as far back as 2,000 years ago for treating various nervous or mood disorders. The Greek physicians recommended people take it not just for its medicinal value, but also for its mystical and protective powers.

Hanging St. John’s wort over the bed was thought to divinely predict the person’s longevity during Midsummer. The sprig that wilted the most overnight indicated the next in line to die. To be sure it wasn’t you, keeping a sprig under your pillow was said to bring on a vision of St. John who would then grant you another year of life. But beware if the vision doesn’t come!

Called Fuga daemonium (chase away demons) by the ancients, this herb drove away any evil spirits. Ancient Greeks would put it on their home altars and hang them over statues of deities to protect themselves. It was traditionally burned in Midsummer fires to protect the community from misfortune such as illnesses or fire. St. John’s wort was used to conquer evil, defeat curses, and exorcize demons.

St. John’s Wort is well known as an antidepressant and anti-inflammatory due to the active compounds hypericin and hyperforin. The flavonoids rutin, quercetin, and kaempferol are also found in St. John’s Wort and have an impact on its medicinal abilities. Using St. John’s wort for anxiety and mild depression has fewer side effects and is just as potent as SSRIs. However, doctors aren’t exactly sure how it works. They believe that the herb has the brain make more serotonin, dopamine and norepinephrine. These neurotransmitters specifically improve mood.

and tingling. It is important to note that the effects of the herb can take weeks to become apparent, and increasing the dose will not make it work faster. In large doses, St. John’s Wort may cause severe reactions to sun exposure.

It is not recommended for pregnant or breastfeeding women. Children between the ages of 6 and 17 should not take it for more than eight weeks.

St. John’s Wort can cause internal interactions that either remove other drugs from the body or metabolize them to inactive forms. St. John’s wort interacts with several medications such as birth control pills, allergy medications, sedatives, medications for migraines, and heart disease medications.

Consult your doctor before taking St. John’s wort if you have a bleeding disorder, are suicidal or severely depressed, have a weak immune or nervous system, take drugs for HIV/AIDS, have high cholesterol, have seizures, are prone to swelling, have stomach or intestinal problems, or have cataracts or diabetes.