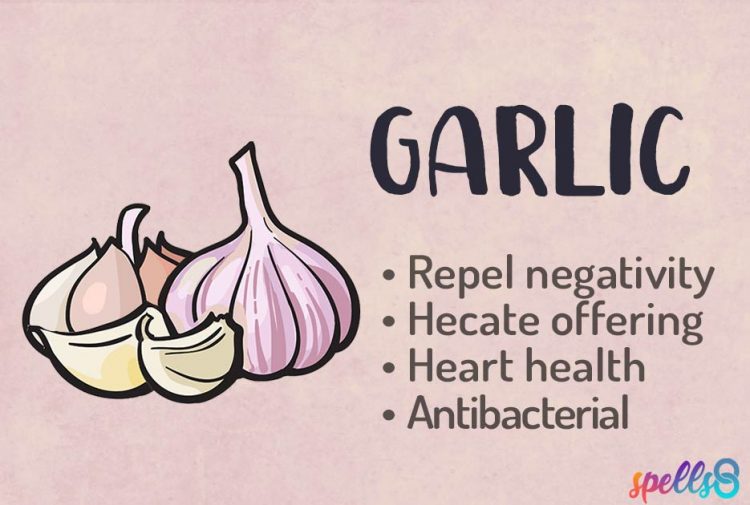 Garlic is a key ingredient in many ethnic cuisines and has a cherished history in herbal medicine. It has a distinctive aroma and flavor, very strong and penetrating, with magickal properties that offer protection and repel evil.

In the home, garlic wards off all negativity, keeping away thieves and all evil. Place it near the doors or windows to repel envious people. A simple blessing ritual for a new home is placing garlic in every corner of the house.

Garlic was traditionally eaten during festivals dedicated to Hecate. Leaving a clove of garlic at a crossroads is a wonderful offering to goddess Hecate for protection or gratitude.

Origin: Garlic is believed to be a native of central Asia, South Asia or southwestern Siberia. There is some debate over the origin of this herb.

Garlic (Allium sativum) is a close cousin to the onion. Used in most cultures for cooking dishes, garlic is also a potent medicine with many health benefits as it has historically been used to prevent and treat a wide range of problems. The father of western medicine, Hippocrates, prescribed garlic to his patients in order to treat respiratory problems, parasites, poor digestion, and fatigue.

In ancient Greece, it wasn’t only the ill that were prescribed garlic, the Olympic athletes were also given garlic in order to enhance their performance. In fact, garlic could be considered the first performance enhancing “drug” used in sports. But garlic wasn’t just used for performance, athletes also used it to protect the skin against toxins. The New World received garlic on Columbus’ second voyage and it has never been the same!

Used to maintain health during the plague, garlic was predominantly used to ward off evil spirits, malicious spells and hexes, and vampires. Romanians had been rubbing garlic on their windows and doors for hundreds of ears to repel vampires. In fact, even in death they would place garlic in the mouth of the deceased to prevent evil spirits from entering the unoccupied body. Chinese and Malaysians rubbed their children’s heads with garlic to protect them against vampires. Today, garlic is magickally used to dispel negativity, repel envy and jealousy, and ward off thieves. It also protects against psychic vampirism.

Garlic is sacred to Hecate, the ancient Greek goddess of witchcraft and magic. Leaving a clove at a crossroads is one way to honor her as garlic was closely associated with her cult. Garlic has always been linked to healing and curing illness. Calling the goddess Hecate and using garlic is perfect for spells involving protection, self-empowerment, and courage. In fact, the ancient Roman soldiers would eat garlic before battle to give them strength and courage. A clove of garlic strengthens the energy of mojo bags.

Garlic oil contains a component called diallyl trisulfide that helps to protect the heart both during surgery and after a heart attack. Garlic oil reduces damage caused by heart attacks. It has also been shown to protect people with diabetes from cardiomyopathy which is the leading cause of death for those with diabetes.

In studies, the phytochemical allicin has inhibited bacteria, viruses, and yeast from growing. This is because allicin reacts with other enzymes and impedes their growth. It is powerful against pathogens like Helicobacter pylori, S. aureaus, and E. coli. Current research shows that garlic can also be used to help heal ulcers. Women have also used garlic cloves internally to treat vaginal yeast infections.