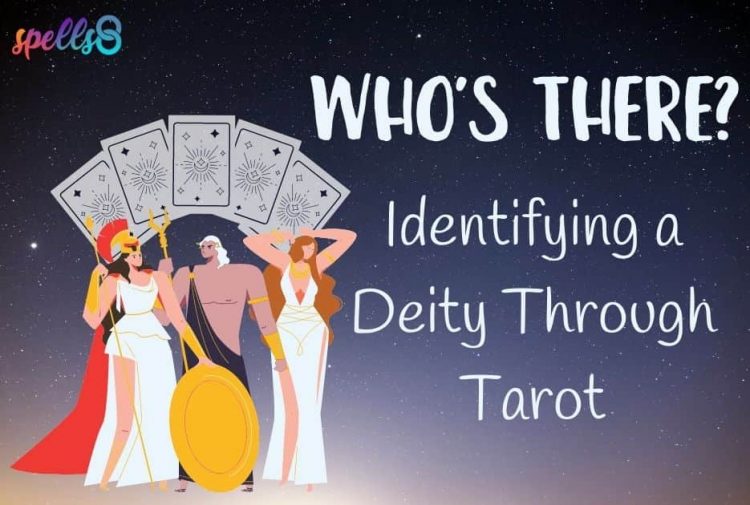 Tarot is a wonderful divination tool that can help us see into the future. It can also be a useful guide for self-reflection and exploration. However, you can also use tarot when trying to identify a deity that may be reaching out to you. This is done through the use of tarot spreads — methods of laying tarot cards out during a reading. In this post, we will give a brief explanation of deity work and why you might need to identify a deity. We will also cover a simple deity identification spread to get you started as well as discuss the limitations of deity identification tarot spreads.

What is Deity Work?

The answer to this question is going to depend on who you ask. For the sake of this post, we will define deity work as any working relationship that one has with a deity. This includes working with deities for short amounts of time such as for spells and rituals. It also includes more long-term relationships such as patron and matron deities that help with spiritual growth and personal development.

There are many reasons why one might want to work with deities. For short term relationships, one might call on a deity and ask for help in their spell or ritual. A deity may also reach out to someone and offer their help in a spell, ritual, or person’s life. A long-term relationship with a deity can include devotion, worship, and symbiotic relationships that involve offerings.

As stated above, if a deity reaches out to you and you have no knowledge of who they are, you will need to identify who they are. This is especially important if you plan on working with the deity and accepting their presence in your life. Identifying a deity is not always easy, though. It involves the use of intuition, something that must be developed by the witch to be effective.

Your intuition will be key in identifying a God or Goddess that has made themselves known to you. We may not always get clear answers from them as to their name, their culture, or their general domains or stories. This is where the tarot spread for identifying a deity comes in handy

Just like with any other tarot spread, there are certain things to keep in mind when trying to identify a deity through tarot. This method is not without its difficulties and you should be aware of common issues that may arise. There are also a few tips that can help make this process easier for you.

We are only human. This means that we may make mistakes when it comes to interpreting our tarot spreads. We may go into a tarot reading with the expectation or hope for a specific answer. Be careful with your bias and hopes. This can influence your reading and make you connect symbols and cards that might not have a connection otherwise.

Simple is not always Best

Doing one reading and calling it good is not the best way to approach deity identification. This spread may give you an answer but it is up to you to dig deeper into those answers. Research the deity you feel is reaching out. Look into their signs, symbols, and traits. Do not stop at one tarot reading just because you got your answer. Often, this answer is only the beginning.

Read the Cards Together

Even though each card is separate and can stand alone, it is better to read the cards together. This can give you a fuller picture of the deity you are dealing with. Card one is the beginning of the spread, but the rest of the cards will feed back into that first one. The characteristics from cards two through five will all coexist. Those characteristics then need to be applied to card one for a fuller picture. The same is true for cards six and seven. Throughout the spread breakdown, examples have been given to show how this works. Keep reading for the full spread!

As discussed above, this tarot spread can help you identify a deity or other spirit that is reaching out to you or making their presence known. Use this spread as a starting point for further deity work if that’s what you desire.

This spread consists of seven cards laid out on a surface in a circular pattern. One card represents the deity as a whole. Four total cards represent traits or aspects of the deity while two other cards represent symbols of the deity. It is important to remember that the traits of a deity may be positive or negative based on society’s standards. This does not mean that the deity is “good” or “evil”. It only points to their possible strengths and domains of divinity. One final card can be pulled at the end of the reading to represent the connection between you and the deity. This card is optional and I only recommend pulling this card if you are considering working with the deity you have identified.

Card One: The Deity

This is the first card you will pull. This card is meant to represent the deity as a whole. This can include, but is not limited to, their physical appearance, their demeanor, or their location. It is common for this card to be more general while the other cards help give specific information.

Four cards represent different aspects of the deity you are trying to identify. These may be individual traits in each card or multiple traits across all cards. It is important to take all of the cards into consideration when determining the traits you have been shown. For example, if more than one card deals with abundance, perhaps the deity in question is connected to Spring. If a card is shown that also connects the deity to death and cycles, perhaps the deity in question is connected to the harvest or agricultural cycles rather than Spring.

The last two cards reveal signs and sacred symbols associated with the deity. This can be included in the imagery on the cards themselves or through the meanings associated with the cards. Take note of anything that feels important, no matter how small or trivial. This can include colors, animals, natural landscapes, and even how the card makes you feel.

Card Eight: The Connection to You

As mentioned before, this card is optional and is not shown in the spread image above. I only recommend pulling this card if you have an interest in working with the deity you have identified. This card will show you the connection you may have with the deity. This can include working relationships, how you can help the deity, and how the deity can help you.

You have your spread. You have your notes. You even have an idea of who is reaching out to you. But what do you do now? Well, you have options! If you still do not know who the deity is, now is the time to research. Keep track of your notes and look into deities that might have a connection with the traits you have listed. You can check out our course on Goddesses from around the world to get you started.

If you know who the deity is then you have a decision to make. Will you work with the deity? Will you politely decline their offer? The choice is up to you from here on out. If you decide to work with the deity, you may want to start with offerings, devotionals, and getting to know them through their stories.

Here are a few more links that might help you on your journey with deity work!

For Wiccan practitioners, the divine is comprised of two equally balanced energies essential for life: the masculine and the feminine. Neither is seen as above or below each other, rather both are necessary components for the miracle of life.

Learn more in the FREE course!

Do you need a tarot deck? Here’s a free download with a complete set of cards to start reading Tarot. I’ve also included a smaller version for journaling or carrying around. The files consist of the 78 Tarot cards ready to print and cut out, in PDF format.

🖨️ Print your own cards!

A good Tarot book can completely transform your ideas about the 78 cards and their meanings. 🃏 Each Tarot deck is an admirable symbolic picture of the Universe, and each Tarot reader projects their own interpretation of the archetypes. Here’s a collection of legal FREE books on tarot.

📕Choose a book and start today!