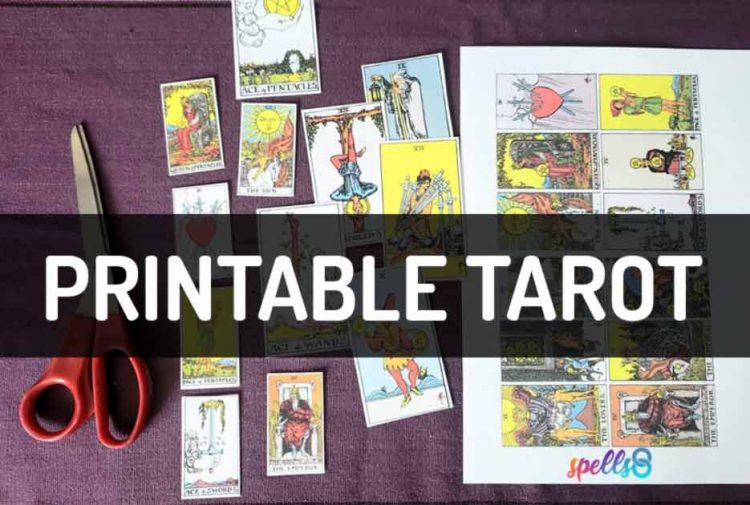 Here’s a free download with a complete set of cards to start reading Tarot. Below I’ve also included a smaller version for journaling or carrying around. The files consist of the 78 Tarot cards ready to print and cut out, in PDF format.

You may print them on Photo Quality printer paper and maybe even laminate them so they’ll last longer!

The name of this deck is Rider Waite Tarot deck, it was designed by Arthur Edward Waite in 1909 based on his personal vision of the Tarot. He was an occultist and the founder of the celebrated Fellowship of the Rosy Cross.

The illustrations in the printable Tarot deck (link to download below) were made by illustrator Pamela Colman Smith and that’s why today it is sometimes sold as the Waite-Smith deck.

Why Print the Rider Waite-Smith Deck?

I’ve chosen to share this particular deck in this set of printable Tarot cards for two reasons: First of all, the deck is in the public domain since 1966 so it can be easily replicated and used by anyone without concern for legal issues.

November’s Full Moon is traditionally known as the Beaver’s Moon because that was when these animals become active to prepare for winter. ❄️

Set your intention with this ritual and printable pages:

Secondly, this Tarot deck is widely regarded as universal and is probably the most popular one for divinatory purposes. The Rider Waite is the best deck to learn the Tarot simply because so many people use it. As a result of that, many learning materials refer to it as the basis for learning how to read the Tarot.

From the Coven: Oracle and Tarot Sets Talk

The graphics in this deck are clear and sophisticated, with plenty of symbolism to work with, and many modern decks have used it as a source of inspiration.

In fact, most other Tarot decks have been in one way or another inspired by the Rider Waite deck, so if you can read this deck, you could potentially interpret any other Tarot deck.

If you’re a beginner, I strongly recommend getting the Rider-Waite Smith deck and mastering that one before moving on to more fun and decorative decks.

From our Online Coven

Read my answer on whether to start with an Oracle deck or Tarot deck.

Get inspired by Kasie’s journey through the Tarot deck as she wrote one haiku (short poem) for each card.

Here is a smaller version of the same deck, reduced by 60% in size: Printable Tarot Cards: Mini Deck

Paste each card on your Tarot Journal to write about it, or use them as a portable Tarot set that you can carry around with you.

The Rider Waite Tarot deck consists of 78 cards: 22 Major Arcana and 56 Minor Arcana. The word Arcana comes from the Latin arcanum, which means mystery or secret. According to Waite, the deck represents his secret doctrine of the Universe and his ideals.

How to Use Tarot Cards?

The Tarot cards are used for divinations and also as a meditation tool. By working with the cards you will discover further information about Uptown Aces Casino and about yourself.

Combining the position of each card in a spread with its meaning will reveal the answer to your questions.

Most Tarot readings usually involve the use of spreads. There are hundreds of possible Tarot spreads, and you are welcome to come up with your own variations!

These Tarot printable pages for your Book of Shadows are included in the Whole Tarot Video Course (members-only).

Each page includes the upright and reversed meanings for all the Major and Minor Arcana cards (all 78 cards) in the Tarot deck.

Who was Arthur Edward Waite?

His was one of the first Tarot decks to include complex images not just for the Major Arcana but also for the Minor Arcana cards. Subtle symbols and images help in understanding the true meaning of each card.

Waite explained that his Tarot is a symbolic representation of the collective memory of humanity, and considers that the cards are a very important tool to achieve self-knowledge. Arthur Edward Waite believed that the mixture of his symbols revealed the hidden influences of the world.

Another very famous Tarot deck is the Tarot de Marseille.

One of the differences between these two decks is that in the Major Arcana of the Tarot de Marseille, Justice occupies the eight position (La Justice VIII) while this trump is in the eleventh position in the Rider Waite deck (Justice XI). The card that takes the 11th place in the Tarot de Marseille is La Force (XI), which is equivalent to Strength (VIII) in the Rider Waite deck.

Another difference is that the Christian imagery of the Tarot de Marseille were toned down in the Rider deck; for example, the card the “Pope” became the “Hierophant” and the “Popess” became the “High Priestess.”

But probably the main difference between the two decks is that in the Tarot de Marseille, the Minor Arcana don’t depict “scenes” but rather just numbers. The main innovation of the Rider deck was adding figures and extra symbolism to each card in the deck. This concept was then imitated by later Tarot decks, as mentioned above.

Read more about the differences between the Marseille Tarot and the Rider Waite deck here.

It is unknown when tarot began to be used for divination but there are no documented examples before the 18th century, although there is evidence of the divinatory use of similar cards in 1540.

Learn more about the history of Tarot and how to interpret the cards here: Whole Tarot Video Course: Intuitive & Symbolic 🔮