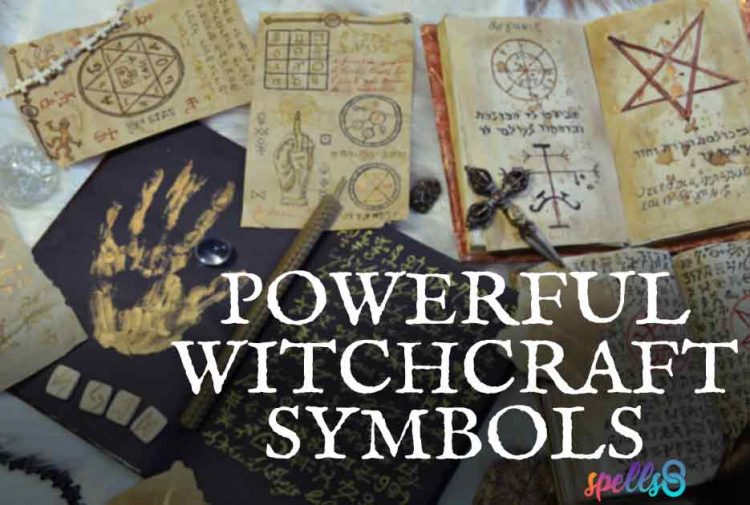 We are surrounded by symbols in our waking life and we don’t even realize it. You have probably seen at least five symbols today! Symbols are used for logos such as the Spells8 logo, as ways to minimize speech such as the play button on a remote, and as a way to hold space for words. Symbols are used in witchcraft, too, and their meanings and uses vary just as much from one witch to the next.

No matter how you view symbols, it is no secret that they can hold a sacred place in the practice of many witches. Keep reading to learn about 10 common symbols in witchcraft plus ways you can use symbols in your practice!

10 Common Magickal Symbols and Their Meanings

The symbol of the Triple Goddess is two crescent moons with a full moon in the middle. This sacred symbol is used to represent the Wiccan Goddess in the phases of the moon. It is also a reminder of her three phases as Maiden, Mother, and Crone.

The pentacle, not to be confused with the pentagram, is a five-pointed star encompassed in a circle. The pentacle has been used in countless belief systems throughout history, but it is commonly thought to represent the four classical elements as well as Spirit. Starting from the top and moving to the right, the points on the pentacle represent Spirit, Earth, Air, Fire, and Water. The most common use of the pentacle in witchcraft spaces is as an amulet of protection.

A symbol found in Celtic cultures, the triquetra is thought to represent the three realms of existence in many Celtic belief systems. These are Land, Sea, and Sky. Though the historical meaning is not known, many people have given their own meanings to this symbol including connecting it to deities such as Brigid or the three phases of the Wiccan Goddess.

The Ankh, sometimes called the Key of Life, is a cross symbol with a loop at the top. This symbol is an ancient Egyptian hieroglyphic symbol for life itself. In ancient Egypt, life didn’t stop upon mortal death, and this symbol covers both the mortal life and the afterlife. The Ankh has been worn as a symbol of life, protection, the sun, fertility, and light.

The four physical elements are represented easily with these alchemical symbols. There is one for each element: Earth, Air, Fire, and Water. They consist of triangles in different orientations, some with a line and some without. These symbols are part of a system of alchemy and are used as notation for the four classical elements.

Composed of three swirling or bent lines, the Triskelion dates back to the European Neolithic and Bronze age and is found in many different countries. The oldest triskelion found to date is that of a carving in Newgrange, a passage tomb in County Meath in Ireland. This triskelion is roughly 5,000 years old! The symbol’s original meaning may be lost, but the triskelion is used by many Celtic reconstructionist polytheists in their practice to connect them with the ancient Celtic peoples.

Also known as the Strophalos of Hecate, this symbol is made up of many parts. First, there is a six-sided star in the middle. This is then surrounded by a labyrinth made up of three sides. Finally, it is all encased in a circle. Some speculate that the star in the middle represents Divine wisdom while the labyrinth represents the stages of human growth with the outer circle being representative of Hecate’s job as guardian. However, this can’t be verified with historical sources. However, this tool has now been used in modern meditative works involving Hecate and magick in general.

The Septogram is a seven-point star that has many uses across the world. In neo-pagan faiths it is sometimes called an Elven Star or Fairy Star. It is seen as sacred in many neo-pagan and witchcraft traditions. It is said that alchemists used the Septogram to represent the seven alchemical metals and their corresponding planets. Many modern witches now use the Septogram, or Fairy Star, in place of the pentacle for their protective works, meditations, and spellwork.

Spirals are found all over the world and represent many things to many different people. It is commonly used to represent the cycle of life, death, and rebirth. Many may also use it to represent lessons that they may continue learning along their path. Others may see the spiral as a symbol of fertility representing life coming from the womb of the Goddess.

How to Use Symbols

Just like the infinite types of spells, there are also infinite ways to use symbols within witchcraft. The only limit is your imagination and creativity! However, today I am going to go over four different ways you may want to use symbols in your practice. These are basic examples, so feel free to utlize them in any way that suits your needs.

We went over a common method of making sigils in this post, but did you know that you can create a sigil using symbols that hold power rather than names? This is a form of intuitive sigil crafting. Rather than creating lines and shapes with leftover letters, you instead combine different symbols together to create one larger symbol for your intention.

For example, if you are looking to draw money into your life, you can combine the alchemical symbol for Earth (see above) with the symbol for your currency to use in witchcraft. Add that sigil to a spell like the one below and boost your manifestation power. Again, the possibilities are endless, and you can even use personal symbols that only have meaning to you!

Inscription is the act of carving or otherwise drawing a symbol onto an object. The most common type of inscription would be during candle spells. Some spells require the carving of symbols, sigils, names, and other things into the wax before burning the candle. The same can be applied to other forms of crafts. Embroider a symbol onto a pillow to promote lucid dreaming. Wood burn a symbol into your kitchen table to promote abundance and a happy home. Some symbols are better suited for certain tasks while others can be all-encompassing. If you’re not sure how to dress your candle, check out the post below!

The most common way witches use symbols in spellwork is the creation of sigils. However, we can take this further and apply it to most symbols we might use in our practice. Choose a symbol that holds power for you and keep it in your sacred space. You can do this by finding a physical representation of the symbol either through a statue or drawing, consecrating it to make it sacred, and keeping it in a safe space. You can include symbols in your spellwork through candle inscription or even burning a bay leaf to make a wish.

Depending on the spirit you’re working with, a symbol can be an appropriate offering to make. Some deities prefer burned offerings. Others prefer offerings of water. And some deities prefer random things that you would never even think of! In any case, you can choose a symbol to offer the deity of your choice, consecrate it as sacred, anoint it with sacred oils, or work with it in any way you choose.

If this wasn’t enough for you, we have even more information on different symbols, their meanings, and their uses. Check these out!

From Zodiac signs to personal sigils, images of the elements to motifs that scream witchcraft- there sure are a lot of magickal symbols out there to explore!

The five-pointed star was widely used in Greece around 7th-6th centuries BCE and appeared on many artefacts. The pentacle is different than the pentagram. If you have trouble keeping them straight, we have a short lesson on the difference between the two.

Just like any other religion, Wicca has its own religious symbols which carry spiritual meanings and sacred power. You have likely seen some of these pictures before, so here’s an opportunity to learn their meanings and origins.

In this video course we will explore the Old Germanic runic alphabet known as the ‘Elder Futhark’, sometimes called Viking Runes or Norse Runes.