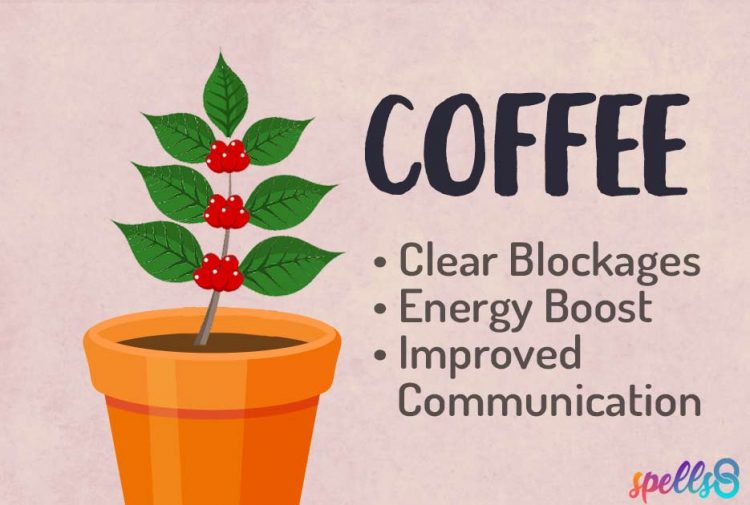 Coffee is not only one of the preferred beverages around the world, its many properties make it popular in health and beauty products and also in religious practices and contemporary Witchcraft.

There are over 75 known species of coffee. But most of the world’s coffee production comes from the Coffea Arabica species Being a fruit that strongly connects with mother earth, its energetic properties stimulate physical and mental performance, clear blockages, stimulate pleasant emotions and eliminate negative thoughts.

Uses of Coffee in Witchcraft

In the world of occultism, coffee has many uses and benefits, such as:

The movement of a bubble on the surface of a coffee cup can be interpreted. It is a sign of money in the future if they move towards the drinker. Unfortunately, it means the opposite if they float away from the drinker.

Try these potion recipes with coffee! The following are simple spells with caffeine for the Witch’s daily practice or daily devotion.

Coffee is one of the most popular beverages in the world. It comes from the seeds of a small tree and oddly, it is considered a fruit. The tree itself is an evergreen that can grow up to 32 feet tall when left alone in the wild. The fruit from a coffee tree is called a cherry and most often it contains two seeds. When there is only one seed inside the fruit, it is referred to as a peaberry. There are over 75 known species of coffee. But most of the world’s coffee production comes from the Coffea Arabica species. It is the earliest known cultivated species and to this day it is the most widely used in coffee production.

The legend says that during the ninth century a lonely goat herder, Kaldi, in Ethiopia noticed his sheep getting really excited after eating some berries from a tree. Kaldi shared his observations with the local abbot who decided they should try during and boiling the berries to make a beverage. They threw the berries into the fire, ground them up, and boiled them in water. This was the first cup of coffee! From there, coffee was taken by Yemeni merchants who began to grow it themselves. The monastery and Sufis as well as other religious devotees began using it to aid in concentration and keep themselves alert during nighttime devotions.

Sprinkle some coffee grounds on your altar to speed up your intentions. Use the natural energy boost of coffee for a magickal boost as well. Help spells move along by adding a boost of coffee to sachets.

If you need to open your lines of communication and speaking up for yourself, trying adding coffee into your magickal work. Anoint your throat with a bit of coffee in the morning to help you find the right words throughout the day.

Coffee aids in clearing both mental and spiritual blockages. Break free of negative or stagnant patterns by including coffee in your spell work. The coffee can help to liberate your own personal energy and get things flowing freely.

Coffee helps people feel less tired and provides an increase in energy levels. Coffee contains a stimulant called caffeine which is by far the most consumed psychoactive substance in the world. Once caffeine is ingested it is absorbed into the blood stream and then goes directly to the brain where is blocks inhibitory neurotransmitters which leads to more neurons firing.

Caffeine stimulates the nervous system which signals fat cells to start breaking down body fat making the fatty acids available as fuel. At the same time it increases the adrenaline levels in the blood. This creates a fight or flight response which prepares the body for intense physical exertion.

Long-term and in really massive quantities coffee has been known to cause digestive problems.