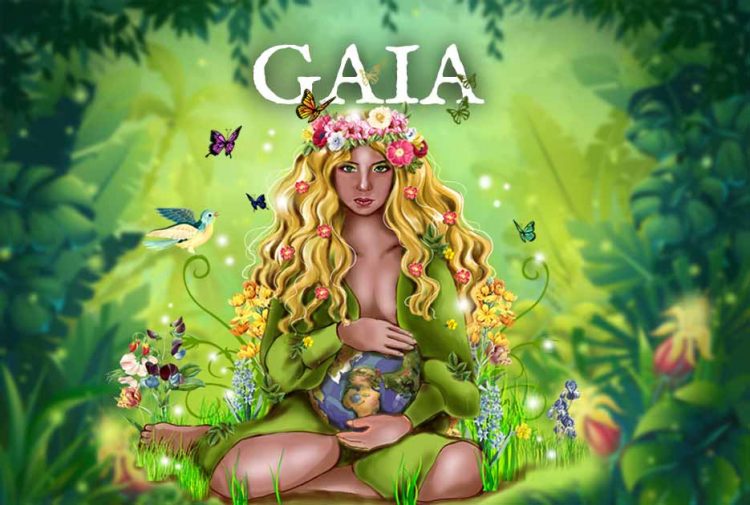 The virtue, beauty, and power of female deities have long been celebrated since ancient times and in the present day. Gaia is one of the most well-known Goddesses to ever exist and the epic tale of her being is now more popular than ever. If you’re curious about who Gaia is and what makes her so special keep reading for an in-depth view of the myth and worship of Gaia, Goddess of Earth.

The name Gaia comes from the Ancient Greek Γαῖα, a poetical form of Γῆ or Gē, meaning “land” or “earth”, also spelled Gaea. She is called the mother to all gods, titans, and monsters, and wife to her son, Ouranos. Her Roman name is “Terra”, which also means earth.

Gaia is her poetic name, in daily worship the Goddess was typically called “Ge”. In ancient times, Gaia was mainly worshiped alongside Goddess Demeter and her cult was widely domestic, extended among the countryside. A modern-day follower may choose to worship Gaia at home with a small altar or shrine. Keep reading to find more about Gaia:

The offspring that follow on from her are some of the most important deities ever to be referenced in classical literature and art. She is one of the four first Gods which include Chaos, Tartarus, and Eros.

According to the story of Gaia, in the beginning, there was Chaos. The empty void that it held was barren until Gaia was born. She then created life and mated with the sky, also known as Uranus, who then fertilized her leading to the birth of an era.

Uranus hated all of his children, so he forced them to live in the depths of their mother. One day she decided to free them and asked them to take revenge on their father, but they were all too afraid of him. Only the youngest, Cronos, accepted, and Gaia handed a steel sickle to her son.

On the night when Uranus covered Gaia all over to join her, Cronos cut off her father’s testicles and threw them behind him. The blood that flowed from the wound fertilized Gaia and from there the Giants, the Erinyes and the Nymphs of the Ash trees were born, in addition to all the divinities related to the trees.

After this mutilation, Gaia united with Pontus from where the marine divinities were born: Nereus, Thaumas, Phorcys, Ceto, and Eurybia.

Planet Earth: Gaia is considered the Life Force of the Earth whose essence keeps it alive. Goddess Gaia is usually depicted by the planet Earth. The fertile and bountiful landscape of the world that we live in is the embodiment of the Goddess and so it is used to symbolize her.

Gaia Statue: Visionary artist and Neopagan Oberon Zell created this design in 1998 as a portrayal of Gaia, a Goddess for the New Millennium. This statue has become the most popular representation of Mother Earth Goddess Gaia, conveying the spirit of our living planet.

Spiral Goddess: Sometimes a silhouette of a simple female form with two crescent moons on either side of her is used as a visual representation of the Goddess, which may or may not necessarily be Gaia, although sometimes Wiccans and other Neopagans blend Gaia with the Goddess. Spirals represent constant motion, the evolution of Nature and life.

Wheel of the Year: The seasons are also a well-known symbol of Gaia. As she is the creator of all living things, including the elements and weather, she is referenced in this manner. Fertility is also used to show Gaia, she is the fruitful and abundant Goddess.

Names and Epithets of Gaia

Gaia was worshiped under the epithet “Anesidora“, which means “giver of gifts”. Other titles were Eurusternos (the goddess with a broad chest). Calligeneia and Pandôros acted as “surnames” of the Goddess.

Chthon or Chthonia which translates as Earth in Greek. Mater Panton (Mother of All), Magale Thea (Great Goddess), Curotrophus (Nurse of the Young).

She is more commonly called Mother Earth in a broader sense. However the concept of an Earth Mother exists across countries and cultures, even before the Greek Goddess herself. For example, Inca mythology features a goddess called Pachamama. The Akan people of West Africa refer to their Gaia as Asase Yaa or Aberewa. In the north of the continent, the ancient Egyptian sky Goddess Nut is the mother of all life as she birthed the stars and the Sun God.

How to Worship Goddess Gaia

Early Greeks dedicated a mountain sanctuary to her, where a high priestess called Pythia lived; this place is commonly known as the Oracle of Delphi, which later became a temple for Apollo.

Today, there are many ways that you can perform a Gaia worship ritual, such as individual or group chanting and meditation. By practicing mindfulness you release resistance and limitations that stand in the way of you connecting with her energy. With a free and open heart and mind, you can feel Gaia’s essence and tap into her Spirit.

Here’s a song to Gaia that you can include in your Gaia Devotional practice.

To worship Gaia through meditation, go outside in nature and sit on the earth. As you ground yourself you will become centered and aligned with Gaia. As you close your eyes and draw deep inside yourself begin to offer your thanks to the Goddess.

Gaianism is an earth-centered philosophical, spiritual, holistic, scientifically-rational, opinion that shares expressions with various religions such as earth religions and paganism while not identifying exclusively with any specific one.

Practitioners of Gaianism are called “Gaians”, or sometimes Gaianists. Followers typically approach the philosophy with the perspective that we should honor the earth, reduce or soften the human impact on the earth, and be respectful of all life on earth. The latter perspective is extended to all forms of life such as plant, animal, or human, and followers will often try to maintain a close relationship with the planet.

Correspondences are used to create symbolic magical links. These magical tools and items can be used in spell work or rituals to convey the energy and representation of Gaia. Whether you use them during your rituals or by placing them on an altar it will evoke her presence.

Gaia Colors: Traditionally, Gaia is represented by rich earthy tones and colors such as brown, green and gray. In statues and other depictions, Gaia is shown with green skin. Ocean and sky blue can also be included. You can use ribbons, candles, paper, and ink in these colors to symbolize the Goddess. This is especially effective if you are practicing Magick.

Gaia Herbs: Herbs such as Honeysuckle and Cypress are correspondences to Gaia. Fruit and grains can also be added to this list as well as fresh, fragrant flowers. They hold the life force energy that is present in Gaia.

Gaia Crystals: Crystals are also a great way to symbolize the Goddess Gaia as they come from the earth. Due to this, all crystals are appropriate, especially those with grounding qualities such as Tourmaline, Jasper, Carnelian, Obsidian, and Smoky Quartz. Any crystal that balances the root chakra is a powerful correspondence to the deity.
​​
Finally, the Element Earth is the most powerful symbol of Gaia. It is the element that represents the Goddess and the heart of her being. She is life, all of which is supported by the earth and everything that comes from it.

Gaia is an agricultural Goddess therefore placing a harvest offering before her is an acceptable offering. This includes Barley, Corn, Honey Cakes, Milk, Rice. They can be placed on your altar if you have one, alongside green candles. If you decide to use food as your offering make sure that they are ripe and in good condition.

You can also choose to follow traditional Greek protocol by leaving Gaia an offering of grains. Collect seeds, maize, and cereals and place them on the ground outside to give thanks to the goddess. This will be well received by her.

Incense making is a meditative and enjoyable way to exercise your creativity! Burn this incense to ground yourself with the beautiful energies of Mother Earth.

To honor Gaia, or to use in any Earth-reverencing ritual, this incense recipe is included in the DIY Witch’s Apothecary Course.

Invocations and Prayer to Gaia

When you honor Gaia you show love to the world and everything in it. She holds the consciousness of the universe in her heart and the epitome of creation. Embrace her warm glow and give thanks for all she has created.

This pagan prayer was created with the Goddess Gaia in mind. Here is this powerful prayer that you can use in your ritual for Goddess Gaia:

“I offer all of my prayers to thee, my respect and gratitude, and may this be a conscious oath to protect you and to honor you as I recognize the great need for your healing.
May your fields be rich and your soil fertile, and may they be sown and reaped with care.
May your mountains attest to your splendor and strength and your valleys hum with the lullaby of your receptive embrace.
May your oceans, waters, rivers, and glaciers be pure and nourishing as the life-blood of the planet.
May your air be clean and free of toxins that all may breathe deeply and fully the great life force.
May your turning invoke an understanding of all cyclical things in nature; of growth and decay, of planting and harvest, of karmic cycles and that as we give, so do we receive.
May your children learn to care for you and love you, and to teach their children the same.
You are the Earth, and I am your child.
So it is.”