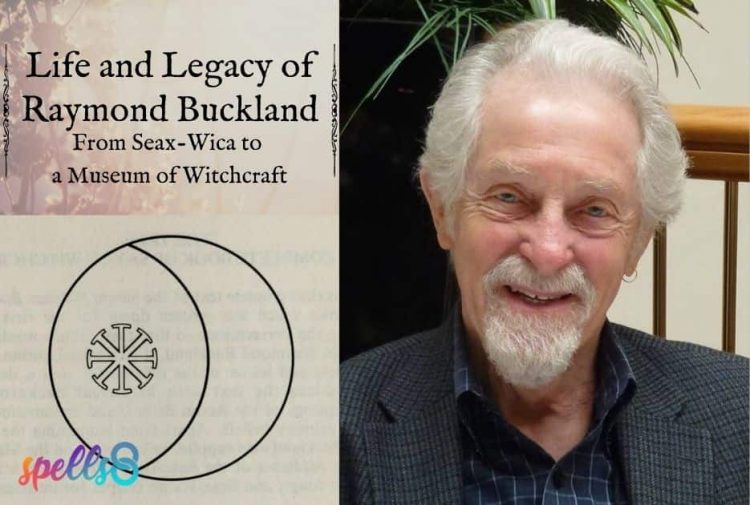 Raymond Buckland (1934-2017) was, and still is, a very influential person in the American Witchcraft movement. He is often credited with bringing Wicca to the United States in the 60s. In fact, his book Witchcraft from the Inside was the first American book written about Wicca by an actual witch. He has an astounding bibliography including more than 60 books, one of them being such a classic that it has been nicknamed Buckland’s Big Blue Book. Over the course of his life, Raymond learned from Gerald Gardner, was initiated into a Gardnerian coven, started his own tradition, and opened a museum that is still in operation today. Much of modern Wicca in the United States is because of the influence and work of Raymond Buckland.

After going to school at King’s College and subsequently receiving a doctorate in anthropology from Brantridge Forest College, Buckland married his first wife, Rosemary Moss, in 1955. Raymond and Rosemary had two sons, Robert and Regnauld. In 1962, Buckland and his family moved to the United States and settled in Long Island.

Raymond and Rosemary separated in 1969 and handed leadership of their Long Island company over to others. In 1974, Buckland remarried a woman named Joan Taylor. However, Joan and Raymond began to drift apart and they were later divorced in 1982. A year later, he married his third and final wife Tara Cochran.

Buckland did not come to the United States with Wicca in mind. In fact, he had still felt like something was missing after emigrating to the United States. However, he came across two books that changed the course of Wicca in the United States forever. The first book was The Witch-Cult in western Europe by Margaret Murray. The second book, and the most important, was Witchcraft Today by Gerald Gardner.

Buckland contacted Gerald Gardner and began a long-distance friendship with him, learning all he could about what would become Gardnerian Wicca. In 1963, Buckland and his wife Rosemary traveled back to the UK to be initiated into Gardner’s coven by Gardner’s High Priestess Monique Wilson. This was the only time Gardner and Buckland ever physically met.

Back in the United States, Buckland built his coven slowly and cautiously. He adhered very strictly to the screening program ensuring that all possible initiates went through the year-and-a-day period of study. Buckland said this was to ensure the new initiates had a genuine interest in witchcraft as a religion. Most Gardnerian initiates in the United States today can trace their lineage back to Buckland’s first coven in New York.

Over time, Raymond Buckland created his own tradition of Wicca called Seax-Wica or Seax Witchcraft. This tradition is inspired by historical Anglo-Saxon paganism, though it is not a reconstruction. This tradition was founded in 1973. In 1974, Buckland published a book titled The Tree which was written with the intention of being a definitive guide to Seax-Wica. This book was then republished in 2005 as Buckland’s Book of Saxon Witchcraft.

What is interesting about Buckland’s tradition of Wicca is that it does not have an oath of secrecy. There is no secret dedication, no full mystery. Buckland created this tradition in a way that is accessible for all people. For what might have been the first time, a coven was not required to be initiated into a Wiccan tradition. Instead, Buckland created a Rite of Self-Dedication and gave many people the freedom to initiate themselves and take hold of their own religious education within Wicca.

“Although still a branch of the Mystery Religion of the Wicca the Seax-Wica do not have an Oath of Secrecy per se. They have a ‘Rite of Self-Dedication’, which serves a similar, though not identical, purpose. This means that their rites are available for study. It means that those searching for the Craft can have ready access to at least one branch, or tradition, of it.”

p.4 The Tree by Raymond Buckland

From Gardnerian Wicca to Seax-Wica, Raymond Buckland is one person that is credited for bringing Wicca to the United States. His work throughout his life has been categorically significant even up until his death in 2017.

The Accomplishments of Raymond Buckland

Throughout his life, Raymond Buckland wrote more than 60 books. The most popular of these books today is his big blue book titled Buckland’s Complete Book of Witchcraft. This book is put together in a course format with each chapter as a lesson. Buckland has said this book is meant to be non-denominational but it does take heavy influence from his own tradition of Seax-Wica.

Among his other books are works on candle magick, chants, coin divination, and many books on Romani witchcraft and practices. His first book was published in 1969 and is called A Pocket Guide to the Supernatural. His last book ever published was published in 2011 and is titled Solitary Seance: How You Can Talk with Spirits on Your Own.

Besides his 60 plus books, Raymond Buckland opened a museum of witchcraft. This museum has been through a lot of moves and shifts but it now currently lives in Cleveland, Ohio. The current collection of artifacts in the Buckland museum come from Raymond Buckland himself, Gerald Gardner, Aleister Crowley, Christopher Penczak, Scott Cunningham, and many, many others.

Raymond’s Passing Into the Summerland

Later in his life, Raymond Buckland suffered from many health concerns. It was reported in 2015 that Buckland had suffered a heart attack caused by a bad case of pneumonia. Two years later on October 28, 2017, Buckland’s wife Tara announced that Raymond had passed away while in the hospital. He had gone into the hospital as a precaution as he was having difficulty breathing. Buckland’s wife Tara took to Raymond’s Facebook page later to say that he “died of a failing heart…but his death was painless.” Raymond passed into the Summerland and is remembered by thousands of people that he touched, both those that met him and those that did not.

It is no secret that modern Wicca in the United States owes a great deal to Raymond Buckland and his work with Seax-Wica. There is one passage that I want to leave everyone with that I think explains Raymond’s thoughts on those seeking to learn more about Wicca. In this quote, Raymond explains that it is always a good thing to question the world around you. You will not agree with everything you see or hear, but the act of questioning and using your critical thinking skills is an asset when navigating the occult. We owe a lot to Raymond Buckland. For that, I am forever thankful.

“Today there is a tremendous interest in the Occult in general, and in Witchcraft in particular. There are several reasons for this, the main one being the form of education received by young people today. They are taught to be inquisitive. Gone are the days when they would accept as ‘gospel’ whatever was handed to them by teacher or by parent. Now they will take what is handed to them and examine it. They will look at it from all angles; they will question. They will perhaps finally accept, but they are just as likely to reject. This is true of all things, including religion. And this is as it should be.”

– Introduction of The Tree by Raymond Buckland