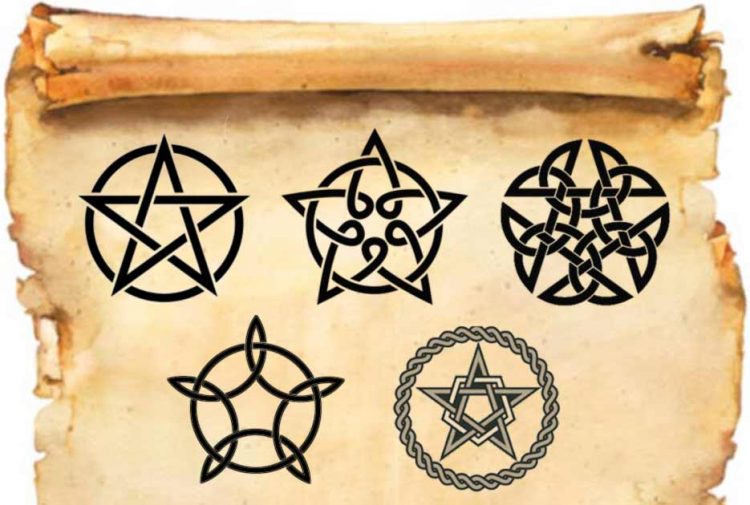 The pentacle or five-pointed star has always been associated with mysticism and the esoteric arts, and today is no exception. So, what’s the origin of the mysterious pentacle and why is it so immersed in spiritual meaning? Let’s dig a little deeper.

Meaning of the Pentacle

There is evidence that the pentacle (sometimes referred to as a pentagram – but we will discuss the difference between pentacle and pentagram later) has been found on Sumerian pottery. The Sumerians are the earliest known civilization existing around 4500 BCE. Sumer was situated in southern Mesopotamia in what is now known as southern Iraq (previously more commonly known as Babylonia).

The five-pointed star was widely used in Greece around 7th-6th centuries BCE and appeared on many artefacts. At that time the pentagram was considered to be a symbol of well-being or health. Already we can see why its meaning would be forever entwined with spirituality. In fact, the word “pentagram” is Greek in origin. It is formed from two Greek words – “penta-” meaning five and “-grammon” meaning line. Essentially, pentagram means five lines.

Print a page with the key concepts of this lesson: What is a pentagram, a pentacle, and why the inverted pentagram is considered “evil”.

Add pages to your Book of Shadows and Witch Cheat Sheets as you explore Spells8.

Although it is not commonly known today, the Christian church adopted the five-pointed star or pentagram to depict the five wounds of Christ and it was often used as a symbol of protection due to this powerful symbolism.

During that time the pentagram was used by Pagans as well as Christians. At that time “Pagan” was the term used for people who had faith or beliefs but were not of the Christian faith. However, Beginning in the 12th century and continuing for hundreds of years, the Inquisition of the Christian church condemned many spiritual practices (including alchemical arts, astrology and magic). Anyone who used the pentagram and other spiritual symbols were persecuted, and the symbol became associated with evil practices and devil worship.

Celtic Religion and the Celtic Pentacle

The Celts were (and still are) a polytheistic group of people or clan. Not only do they worship their many gods and goddesses, they also pay respect to the moon, the sun, and the stars, believed to be supernatural forces. They understand the interconnectedness of all things as well as the birth-rebirth cycle. Irish mythology provides evidence to support the notion that ancient Irish Celts believed in reincarnation.

According to author D.J. Conway, the pentacle was a symbol of the Celtic Goddess Morrigan, who is considered to be the guardian or Goddess of birth and death. With the rise of Neopaganism in the 20th century, many of the Celtic traditions, beliefs and symbols have been incorporated into the Witchy and Wiccan ways of life.

According to The Encyclopedia of Celtic Mythology and Folklore, five was one of the most significant numbers to Celtic peoples (along with number three and the Triquetra symbol), representing a natural order, as witnessed by the five fingers of each hand and the toes of each foot. Five may have formed the basis of the early Irish counting system. The number appears in many mythological contexts:

In addition, there was a social context, for the smallest family unit, called the geilfine, comprised five people. Ireland applied the number geographically, dividing the island into five mythological provinces. Thus five is a naturally occurring number that has its own innate power. There are many more incidents of the number five in Celtic lore, such as five kingdoms, five sacred trees, etc.

Spirals, step patterns, and key patterns are dominant motifs in Celtic art before the Christian influence on the Celts, which began around the year 450 CE. The style is most commonly associated with the Celtic lands, but it was also practiced extensively in England and was exported to Europe by Irish and Northumbrian monastic activities on the continent.

In modern times, Celtic art is popularly thought of in terms of national identity and therefore specifically Irish, Scottish or Welsh. The Celtic knot as a tattoo design became popular in the United States in the 1970s and 1980s.

German occult writer Heinrich Cornelius Agrippa attributed the five neoplatonic elements (Air, Water, Fire, Earth and Spirit) to each of the five points of the pentacle, so its magical symbolism is the perfect balance of all elements with spirit above them.

By the mid-19th century, a further distinction had developed amongst occultists regarding the pentagram’s orientation. With a single point upwards it depicted spirit presiding over the four elements of matter, and was essentially “good”. However, the influential writer Éliphas Lévi called it evil whenever the symbol appeared the other way up.

According to Lévi in his book Transcendental Magic, its Doctrine and Ritual:

“A reversed pentagram, with two points projecting upwards, is a symbol of evil and attracts sinister forces because it overturns the proper order of things and demonstrates the triumph of matter over spirit. It is the goat of lust attacking the heavens with its horns, a sign execrated by initiates.”

Symbolism and Meaning of the Pentacle

The modern pentacle is widely used in many nature-based religions, including Neopaganism, Wicca, Hermeticism, and even as a Tarot suit. One interpretation is that the five points on the star represent the five Elements: Air, Water, Fire, Earth, and Spirit.

The circle around the star is not only indicative of protection, but it also represents the continuous and eternal cycle of nature and birth and rebirth.

You may notice that the points of the pentacle may be depicted with different elements at times. This is because they vary according to tradition.

This is just the Wiccan intepretation and you may come across other patterns and arrangements for the meanings of the elemental pentacle. Each of the five points governs or rules a different aspect of the self, and when all are in balance then we are in balance, physically, emotionally mentally, and spiritually.

The Celtic Pentacle and Wicca

The pentacle is often used in modern Wicca, either as a symbol of protection, a tool for meditation or for use in ritual or spellwork. The top three points of the pentacle relate to yin energies and these can be further broken down into the three aspects of the Goddess: Maiden, Mother and Crone; or the Divine Trinity of Witches: Youth (or Seeker), Warrior (or Maker) and Sage (or Elder).

The bottom two points relate to yang energies. All the energies combined in harmony make us balanced. In addition, the five points represent the five phases of life: birth, childhood, adulthood, old age, and death.

Spiritual Use of the Celtic Pentacle

As you can see there is much history and tradition around the Celtic pentacle, but how can it help in your spiritual practice? You do not have to have any particular background or even specific beliefs to wear the symbol.

While it’s important to understand its origin and wear it respectfully, many people choose to wear the symbol as a piece of jewelry or as a tattoo. Wearing it on your body gives you protection wherever you go. If your symbol is created from silver, then it will enhance the powers of intuition and connect your energies with the moon. If it is made from gold, then you will harness the energies of the sun.

You can draw the symbol in the air around a place you want the protection, for example when casting a circle. If you practice Wicca, the Celtic pentacle may become central to your workings whenever you are invoking or manifesting. The pentacle can be used to strengthen any spellwork. By choosing to meditate with the symbol, you can enhance your intuition and create a stronger connection with the Divine.