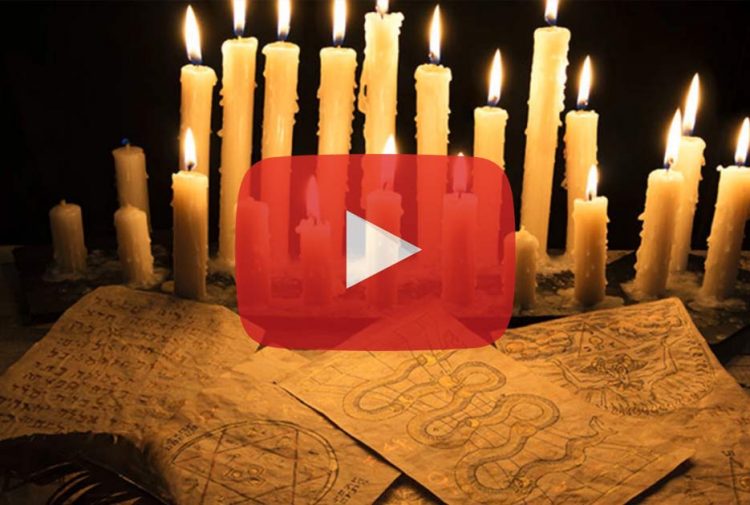 What is Modern Witchcraft? What’s the story behind Wicca? Watch this 10-minute video before moving on to the next topic: Wiccan Values.

This is a quick timeline and history of Witchcraft and Neopaganism. Learn the roots and origins of Wicca since the Middle Ages, into the 20th Century and today.

Create an account to track your progress and take notes ✏, remove ads, ask questions in the Forum and access Witches’ Homework (video spells and guided meditations).

As the Roman Empire underwent drastic social changes, Christianity began to flourish in the densely populated cities. Those who did not convert to the new, fashionable religion often lived on the outskirts of the city. These country dwellers were called ‘paganus’ meaning those who lived in the country. The term pagan originates from this use during the Roman Empire. The men and women who held on tightly to the ‘old ways’ were often called paganus as a derogatory term for not being progressive and modern. Currently, pagans have become known broadly as anyone who does not follow the Abrahamic traditions of Christianity, Judaism, or Islam. Over time, the term pagan became ingrained in the dominant culture as someone linked with the countryside and the natural world.

During the beginning of the Renaissance, pagan symbols and traditions found their way into mainstream European culture through art, music, and literature. The ancient Greek traditions and symbols surged in popularity until the Protestant Reformation. During this schism in Christianity, the integration of pagan symbols and traditions were severely halted until a hundred years later during the Enlightenment. The resurgence of Greek and Roman classics along with their pagan roots was once again acceptable in society.

During the 19th and 20th century, paganism once again began to flourish in the minds of people as other religions such as Buddhism and Hinduism were taking off in popularity. This coupled with the rise of interest in ancient civilizations, helped to spur the foundations of modern Western paganism. During this resurgence there was increased interest in Druid revivals, ancient spirituality, and communing with nature.

The most recent pagan Renaissance occurred during the 1960s in Europe. It began with the repeal of the Witchcraft Act of 1604. In 1542, the English Parliament passed the Witchcraft Act that allowed any crime associated with witchcraft to be punishable by death. While it was repealed only 5 years later in 1547, it was once again restored in 1562. During the reign of James I, the Witchcraft Act of 1604 was passed which shifted the original witchcraft trials from the Church to ordinary courts. The Acts of 1562 and 1604 stayed firmly in place for over three hundred years until their final repeal in 1951.

The modern form of paganism practiced today can be traced back to a single man named Gerald B Gardner from the United Kingdom. In 1939, just before the start of World War II, Gardner discovered his passion and connection with witchcraft. In this same year, he crossed paths with Dorothy Clutterbuck. Dorothy was a high priestess in the New Forest coven and she initiated Gardner into a secret coven of witches. In 1949, Gardner published a book called High Magic’s Aid which he cleverly disguised his experiences in the New Forest coven as a work of fiction. This fictional account of witchcraft worried many practitioners as they began to feel that their secrets were being leaked into the public.

With the repeal of the Witchcraft Act of 1604, publishing nonfiction books on witchcraft was once again legal in the United Kingdom. Gardner took full advantage of this monumental change and released his first nonfiction book on the Craft in 1954 called Witchcraft Today. Doing so enraged many, already frustrated practitioners who already felt their secret traditions were being publicly displayed. He adamantly maintained his position and fervently argued that he did not reveal any secrets that were protected through the oath he took during his initiation. He feared that with the aging of the current community, many practices would be lost unless new members could be found. In order to keep the craft alive, Gardner vowed to publish more books about witchcraft and to become the spokesperson for this blossoming new movement. With that, he began to develop his own tradition that combined ritual with ceremonial magick from various traditions with the help of Doreen Valiente. Gardner did become the pagan movements most outspoken supporter. And the works he and Doreen created become the foundational platform from which all modern pagan movements have sprung.

Gardnerian witches are those that have been initiated into a coven with an unbroken lineage that can be traced back to the father of modern witchcraft, Gerald Gardner. Their sacred rites and holy rituals have been protected through sacred oaths over the last fifty years.

The emergence of modern paganism can also be linked to another influential figure, Alex Sanders. As a young boy of seven, Alex accidentally happened upon his grandmother in the kitchen. She was surrounded by various ritual objects and stood nude performing a ritual. Dismayed by the scene, Alex was sworn to secrecy and initiated into the practice by his grandmother. Over the years, they developed a deep bond as his Grandma Bibby passed down her wisdom of spells, charms, and rituals. The most important of these being the ceremony of ‘drawing down the moon’. In 1942, he burned her Book of Shadows as she had passed to the Summerland. Around this time, Sanders met Maxine Morris, married her, and established a new coven.

This coven grew immensely and at one point contained over 1,600 members. Alex and Maxine gained fame through television appearances and radio shows where they became known as the ‘King of the Witches’ and the ‘Witch Queen’. But in time, their relationships strained, and Alex and Maxine separated. Maxine went on to create her own coven while Alex drifted slowly into retirement. After his death in 1988, a simmering rivalry between Alexandrian and Gardnerian witches erupted throughout the community.

Out of Alex Sanders coven emerged a powerful couple, Janet and Stewart Farrar. This influential couple published several books on the Neopagan movement during the 1970s including Eight Sabbats for Witches, The Witches’ Way, The Witches’ Goddess, and The Witches’ God. Their books were published throughout the United Kingdom as well as in the United States. Their reach into both these arenas enabled them to highly influence the thoughts and practices of the modern Neopagan movement.

After the death of Stewart Farrar, Janet continued to tour and lecture about the Neopagan movement. She married Gavin Bone and continues to speak on the behalf of witchcraft at many events. She espouses that the fundamental principles of witchcraft are to restore our sacred bond with nature and bring together the energies of both the masculine and feminine in sacred union. In this, she suggests that a male dominated culture not be replaced by a female dominated culture, but rather for the two to coexist in harmony with one another.

Paganism found a strong ally in the second wave of feminism during the 1960s and 70s. The nature-based foundation appealed to ecological activists as both found nature to be sacred. Many practitioners began to regard themselves Goddess-worshipers rather than witches in a coven. While Wicca originated in the United Kingdom, Goddess worship sprung forth in the United States as a reaction to mainstream, patriarchal religion. In this version of paganism, the goddess is the practitioner, not just reflected during ritual, as she embodies both sun and moon invoking the goddess within. This concept aligns beautifully with the feminist concept of self-empowerment. In some new traditions, this is taken to an extreme where practitioners choose to exclude men from participation in their covens.

On the forefront of this movement, Z Budapest is a staunch advocate of the sisterhood of witchcraft where all men are excluded from covens. In 1970 she moved from New York to Los Angeles where she opened the now famous shop, The Feminist Wicca. This store become a matriarchal spiritual center for women in the area. Many neopagan women met in her shop to celebrate and worship during the solstices and equinoxes.

All pagan traditions draw from the ancient beliefs as well as from modern beliefs formed in the last century. This religion is a sacred mixture of the old ways from consisting of paganus roots to the new ways focused on divine personal experience. Regardless of the origin of the information or the lineage of the practitioner, paganism flourishes in our societies as it brings a conscious, personal connection with nature as well as with those around us in a communal bond.

Back to Lesson
Next Topic