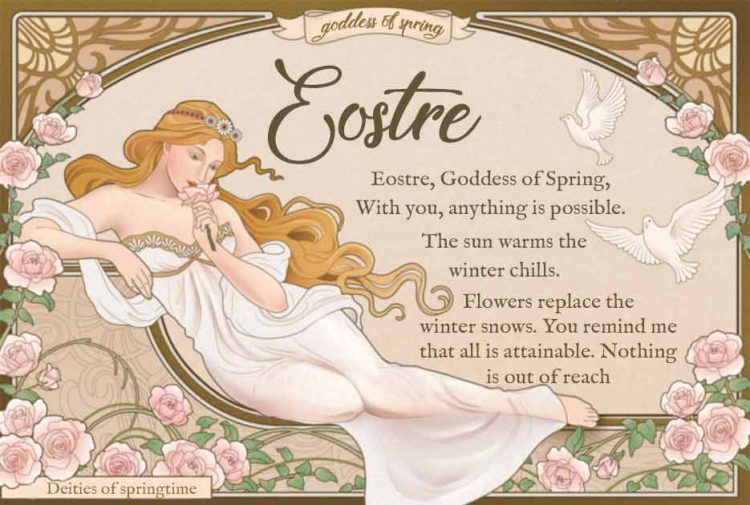 Everyone looks forward to the spring season every year because of the feeling of freedom it brings. After dealing with the harsh realities of winter for several months, it’s time to look forward to new beginnings, as ushered in by the gods and goddesses of spring. 🌼🌷🐣

At the tail-end of the winter season, the deities associated with winter are putting finishing touches to their works and preparing to hand over the mantle to spring deities. These deities represent a new dawn, bountiful harvest, and productivity.

How many goddesses of spring are there?

Across cultures, a number of Goddesses of spring have manifested, including:

Spring is also that time of the year when many cultures are in celebration and festival mode even as a new planting season begins and people can connect with the earth once again, mainly the Wiccan holiday of the Spring Equinox, Ostara.

If you are interested in learning about some of the goddesses of the spring equinox and their unique traits, let’s take a look at some of them.

Eostre has forged a strong reputation as the goddess of spring. She is celebrated during the Spring Equinox and is also widely referred to as the Germanic goddess of dawn. If we trace the name Eostre back to the Proto-Indo-European roots, we’ll discover that it means “morning” or “dawn.”

Who is the goddess of Easter?

Easter is a Christian holiday, and Christianity doesn’t observe any female deities or goddesses. However, many scholars agree that the name “Easter” was taken from the name of the month in which it occurs. April was known as Ēosturmōnaþ which is Old English for “Month of Ēostre”, the Germanic Goddess of Spring. Just like Thursdays derive their name from the Norse god Thor but we don’t associate Thursdays with a deity in everyday use, Easter is not necessarily related to a pagan holiday.

Venerable Bede gave the first detailed description of Eostre in his treatise, De Temporum Ratione (The Reckoning of Time). Bede, a Benedictine monk, states that the yearly Saxon pagan festivals occured during the month of Ēosturmōnaþ, with lit fire and feast set up for Eostre – “the one who ushers in the morning.”

What does Eostre symbolize?

While Eostre is not directly linked with the sun, she is responsible for ushering in light and dawn. She is widely regarded as a symbol of the morning and new beginnings, and bonfires are often mounted to honor and celebrate her.

Eostre is closely associated with resurrection. But this resurrection has nothing to do with coming back from the dead, it’s about the rejuvenation of nature that comes with the commencement of the spring season.

Eostre is widely regarded as the goddess of fertility. She is believed to be in charge of the birth, germination, and growth of living things in Nature. This growth is an indication of the ability of Eostre to enhance the fertility of the soil and land.

Symbols of Eostre and Ostara

In northern paganism, an image of a radiant maiden in white is used to represent her. She is typically depicted as a majestic and messianic figure, part of her symbolism as resurrecting nature.

One of the main symbols associated with spring and Eostre is color. During the spring celebrations, there are several records and accounts of people using red paints on eggs. However, only a few people are aware that the practice came from the worship of the Goddess. Eostre worshipers are known for coating eggs with colorful paint to represent the bright colors of nature and flowers.

Is Freyja a Goddess of Spring?

Freya or Freyja is associated with the spring holiday of Beltane, which falls on May Day. She is a well-known Norse goddess of spring, beauty and love. Freya is usually away from the earth during the harsh and cold months of winter but swiftly returns as soon as the spring season sets in. Freyja bears a magnificent ornament known as Brisingamen, around her neck, which symbolizes the sun’s fire.

It is believed that Freya could transform at will because she owned a magickal cloak made from hawk’s feathers. Freya was often consulted or summoned on childbirth or marriage-related issues, as well as to help women who may be plagued with infertility.

Who is the Roman Goddess of Spring?

Flora is the Roman goddess of spring, flowers and gardens. Although she was one of several fertility goddesses, her association with spring gave her particular importance at this time of year.

Her festival, the Floralia, was celebrated in April or early May and symbolized the renewal of the cycle of life, marked with dances, drinks and flowers. Her equivalent in Greek mythology is Chloris.

Other Roman goddesses associated with spring are Proserpina, the Roman equivalent of Greek goddess Persephone; and her mother Ceres (Demeter in Greek mythology).

Persephone is the young maiden, daughter of Zeus and Demeter, also known by the name of Kore and in Roman mythology as Proserpina. In Greek mythology, Persephone marries Hades and becomes the queen of the Underworld.

The myth of Persephone explains why the land blooms in spring and summer when the goddess is in the company of her mother Demeter, and remains barren and dry in autumn and winter when Persephone is with Hades in the Underworld.

Who was the goddess of seasons?

Demeter is the Greek goddess of the harvest, crops, the fertility of the earth, grains, and the seasons. Also the Horae, which were originally the personifications or goddesses of the order of nature and of the seasons, although later they were considered as goddesses of order in general as well as justice.

▶️ Watch this Lesson: The Wheel of the Year

Other Pagan Goddesses of Spring

Iðunn, also sometimes spelled Idunn or Iduna, is a spring associated with rejuvenation. In Norse mythology, she is the wife of Bragi (the god of poetry). She is in charge of keeping the “magick apples of immortality” which helped the gods maintain their youth.

When at some point she was tricked by the trickster god Loki, she and her apples were taken captive, so the gods began to age and die. Loki was then forced to make amends and rescue Iðunn. According to some sources, he achieved the rescue operation by transforming into a falcon, transforming Iðunn into a sparrow (according to some sources, nuts), and grabbing her with his powerful claws as he flew.

Asase Yaa, also known as Ashanti, is the spring goddess responsible for ushering in new life. She is the Earth goddess of fertility of the Ashanti people of Ghana. Asase Yaa is the wife of Nyame the Sky deity, who created the universe. She’s a fertility goddess who is always strongly linked with the planting season and germination, especially early crops at the start of the rainy season.

She is widely celebrated in the fields during the planting season, and in homes as the goddess of productivity and fertility. Farmers often consult her and ask for permission before proceeding with planting. They also observe Thursdays, her sacred day, as work-free days.

Continue learning about the goddesses in history and myth: The Goddess’ Temple: Myths & Symbols of the Divine Feminine