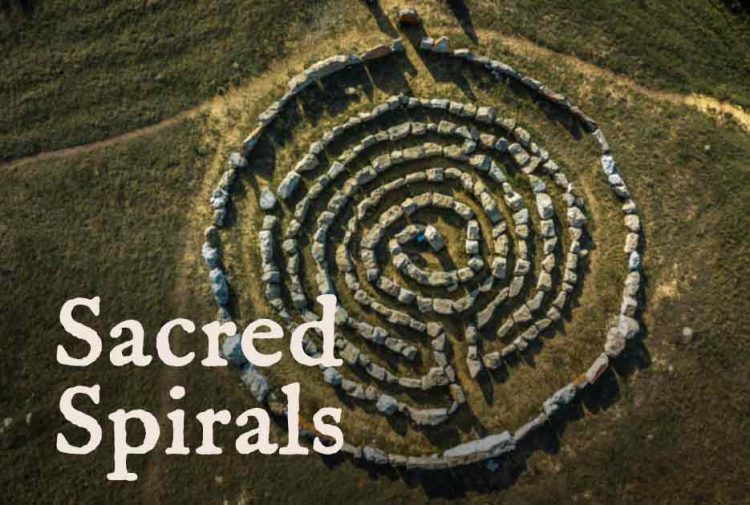 The spiral is not just a swirly symbol, it is one of the most frequent shapes in everything that is related to life and growth, evolution and expansion. A large number of plants and animals develop in a series of patterns directly related to the spiral.

From the shape of the DNA known as the “double helix” to seashells, pinecones and the fingerprint, Mother Nature is a great lover of spirals. In fact, “helix” is simply the Greek word for “spiral-shaped”. The spiral of life symbol is one of the most widespread forms in nature: hurricanes, embryos, galaxies, whirlpools, animal horns… we are surrounded by spirals at every level — “as above, so below”.

What do spirals represent?

Spirals represent the concept of rotation around a fixed point while increasing its distance from that point. The spiritual meaning of the spiral is interconnected and stemming from the source of all creation.

A spiral has been a sacred symbol for a long time and it symbolizes development, extension, rotation and progress. The spiral shows us the cyclical nature of evolution where the rhythms are repeated. It evokes an archetypal path of growth and transformation, both physically and spiritually.

What is the sacred spiral?

How old is the spiral symbol?

One of the oldest spiral symbols carved in stone (petroglyph) is found in the Newgrange entrance stone, dated to around 3200 BC. It is a prehistoric monument in County Meath in Ireland, built duing the Neolithic Period, making it older than the Egyptian pyramids and Stonehenge. The area has been a center of human settlement for at least 6,000 years, but the major structures date to around 5,000 years ago.

Other ancient spiral rock carvings are from the Early Bronze Age, 3000 – 2300 BC, and were found in the island of Naxos in Greece.

What does the symbol with 3 spirals mean?

The Great Triple Spiral, known as An Thríbhís Mhòr represents the three realms of the Gaelic universe: land, sea, and sky. The symbol with three spirals is also named Triskele or Triskelion and many of these Celtic spirals have survived carved in rock and can be found in Ireland, the British Isles and Galicia. The old Irish tale Táin Bó Cuailnge explains the perception of the world that the ancient Celts had, as being three separate realms: “Is it the sky that breaks or the sea that ebbs or the earth that quakes or is this the distress of my son fighting against odds on the Foray of Cuailnge?”

What does a spiral symbol mean in Native American culture?

In the Southwestern area of the United States, where the Anasazi people lived spiral shapes have been found in painting designs and pottery. Some of these spirals were used in combination with lizards and snakes. Often, the Native American spiral symbol is associated with the sun, however, for example, the Hopi pottery symbols and other rock art shows a single spiral as a symbol of the Ho-bo-bo, the twister or tornado.

While many spirals have been used as a generic “tribal symbol”, their meaning can vary depending on which tribe it is inspired from. The Maya people of Mesoamerica used the spiral to represent the endless cycle and movement of life energy, Hunab Ku.

Many Anasazi spirals are counterclockwise which is a symbol of human activity, as opposed to the “sun-wise” direction said to duplicate the sun’s motion across the sky. However, the same spiral can be clockwise or counterclockwise depending on whether you trace it from the outside or the center.

What is the spiral of life?

According to Anthropologist José Luis Cardero, “The Celts, the Mycenaeans and the ancient peoples used spirals to represent the concept of the Great Cosmic River of the Universe”. The spiral is the basic configuration of the chakras (wheels or vortexes of subtle energy) in the body and symbolize a change in scale, or even a portal to another dimension. Spiritually, the spiral of life is a symbol of the path to be traveled in life. This symbol is one of the first representations that have been found in Paleolithic caves and is constantly repeated throughout the planet.

The Spiral Goddess symbol is inspired by the ancient female figurines found in archaeological sites and is currently used as the main icon of the Goddess movement and other nature-based religions.

Since ancient times, sacred spirals were found embedded in architecture and artwork. There are many theories of the spiral or swirl symbol meaning, including the cycles of life and death, or as a symbol of the Mother Goddess or Divine Feminine.

Sometimes the spiral goddess symbol is depicted alongside the crescent moons of the Triple Goddess Symbol, representing the cycles of life and the three aspects of the Goddess: Maiden, Mother and Crone.

In this case, the spiral Goddess symbol represents the womb, showing the energetic vortex through which we enter life. The spiral located in the belly of the Goddess also symbolizes how everything is born in curved shapes. There are no straight lines in Nature. The spiral is the symbol of life, creation, nature, strength and energy.

Her raised arms signify that the Goddess invokes the power of the spiral within her to bring life. The Goddess is the origin of everything, she is the beginning but also the end, She is the one who gave birth to the universe and the one who can destroy everything for its regeneration.

A spiral has also been referenced as a marker for transformation and, within Wicca and other faiths, it can be linked to the endless turns of the Wheel of the Year.

A sacred spiral represents unbound energy, and the cycles in which energy flows and manifests. Creation may appear to have a point of beginning, the between, and the end, but this is just part of the spiral of existence. Spirals may represent the appearance of time and the different cycles we experience. We experience cycles, or seasons, in nature, astrology, history—and within our everyday lives. This points to there being an undercurrent of energy that penetrates through everything, promoting flow and change, in order to keep expansion and experience possible.

The moon and its cycles are an example of a sacred spiral—without it actually containing a spiral. There seems to be a beginning, the new moon, and an end, the full moon. These beginning and ends are subjective and hold no truth—because the moon is in a constant sate of flow and transformation. The earth’s weather spirals through seasons which we use to mark time. In ancient times this sacred spiral was honored and used to understand planetary patterns and changes in the weather.

In your spiritual practice you can harness the energy of the sacred spiral and tap into the infinite awareness and understanding of the universe. The spiral symbolizes the steady flow that exists within everything. When you are connected to your source self and your spiritual self, you are in a state of being that allows energy to freely move in and out of your experience. When you are allowing, life brings with it wonderful experiences.

The sacred spiral indicates that we as human, and the world around us are connected in unimaginable ways. Even if we can’t understand the complexity of creation, we can see the universe’s signature of the spiral everywhere we look. Energy will always exist, whether it’s physical or non physical, and it will change and transform through never ending cycles of cosmic intelligence. We can use this understanding to allow our lives to unfold and for our lives to change, without resistance, as we allow the universe to dance through us, spinning and spiraling through everyone and everything.