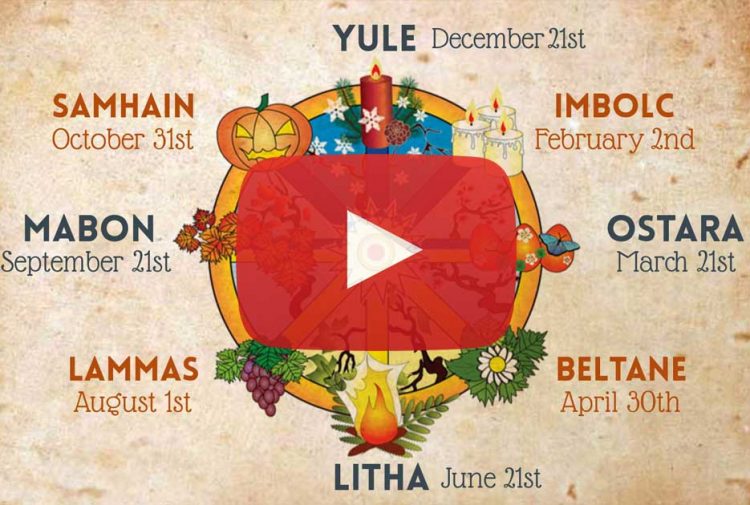 Wicca Self-Initiation: Video Course in 8 Ritual Nights Day 2: Tuning In The Wheel of the Year

Meaning of the Wheel of the Year

Natural processes are seen as a continuous cycle. The passage of time is also seen as cyclic and it is represented by a wheel or a circle. Birth, decline and death, as experienced in human life, is repeated as the seasons progress. The change of the seasons is traditionally celebrated in the form of holidays called Sabbats.

The history of the wheel of the year is long as it can be traced back to early agricultural practices. The solar cycle was broken into eight periods, which Wiccans today celebrate under the name of Sabbats. In order from beginning to end of the year, they are:

Printable Pages for your Book of Shadows

Wheel of the Year

In Wicca, the beginning of each season is celebrated with holidays called Lesser Sabbats. In between each solstice and equinox there are “Cross Quarter days” or Greater Sabbats, which are also celebrated.

Wiccans honor both the lunar (moon) and solar (sun) cycles of nature through various rituals and celebrations called sabbats and esbats.

The changing of the seasons as the sun travels across the sky and the earth turns upon its axis are marked through various celebrations and traditions called sabbats. The solar cycle is broken into eight sabbats and is collectively referred to as the Wheel of the Year. The Wheel of the Year represents not just the marking and passing of time, but the never-ending cycle of nature’s fertility. There are two equinoxes, two solstices, and four minor points that fall in between each of these in the Wheel of the Year.

Sabbats are celebrations that bring the community together to recognize the change in seasons. The celebrations connect Wiccans to the rotation of earth and the cycle of birth, maturity, and death. Many followers believe that these eight holy days connect them to Mother Earth and her bounty.

This is the beginning of the pagan year, often referred to as the Day of the Dead or The Witch’s New Year. Samhain, pronounced Sow-en, translates to summer’s end. It is the time when the sunlight begins to recede, and the darkness grows. During this sabbat, Wiccans celebrate and honor the dead as the veil between the worlds is the thinnest. When the veil between the everyday world and the netherworld thins, communication between the living and the departed becomes easier through various forms of divination. Samhain is a time to remember and honor the ancestors.

Yule is celebrated on the darkest day of the year. As it is the winter solstice, the amount of daylight is shortest during this day. Yule celebrates the coming of the light as the daylight begins to slowly lengthen. The cycle of nature begins with the birth of the Sun God during this celebration. Yule logs were gathered from the land or given as a gift to burn in the home. In more modern times, a piece of wood is often used with three holes for candles and they are lit to symbolize the god, goddess, and season. Mistletoe and holly are hung in the home for good fortune and to encourage a hardy crop for the following year.

When the first stirrings of spring are in the air, it is time to celebrate Imbolc. The womb of Mother Earth and her fertility are reveled during a holiday that literally translates to ‘in the belly’. The light is becoming stronger and new life is beginning to spring forth from the earth herself. During this turn of the Wheel of the Year, the maiden shines as the crone recedes and the Sun god reaches puberty.

As the sun passes over the celestial equator, the goddess Ostara is honored. She is the Anglo-Saxon goddess that represents the dawn. Fertility is in full swing during this celebration complete with eggs, rabbits, seeds, and flowers. The symbol of the egg represents the merging of the sun (yolk) with the moon (whites and shape of the egg). During Ostara, night and day are in perfect equilibrium as are the goddess and god. As the days become longer and warmer, the earth fills with energy and life as it is time for hopes to transform into action. The Goddess and the Sun god have begun to grow and mature.

Beltane is the beginning of summer and once again is a celebration focused on fertility. Balor or also known as Bel, the god of light and fire, was a Celtic deity that helped to ensure the fertility of the earth. Fires were lit on hilltops in his honor to celebrate the return of life. Wiccans celebrate the mating of the Sun god and fertile earth goddess on this day and rejoice in the pregnancy of the goddess. The love between men and women is honored during this sacred bond of love. Dancing and singing around a maypole is a common way to celebrate Beltane.

Litha has the longest amount of light of any day of the year. As it is a celebration of the zenith of the sun, it is essentially the opposite of Yule’s darkness. On this day, light and life are abundant as the Sun god has reached his maximum strength and potential. The goddess is heavy with pregnancy as the earth is heavy with the ripening crops. While Litha is a celebration of the god and goddess at the pinnacle of their life, it is also a time of sadness as it ushers in the decline of the sun. This decline is linked to weakness and death as the Wheel of the Year once again begins to turn towards winter.

Translated as ‘loaf mass’, this is the time of the first harvest. As the corn is ripe in the field, Lammas marks the start of autumn. Lughnasadh derives from the Celtic sun god, Lugh, who was associated with the sun. Wiccans believe that at this time, the sun god’s power begins to wane. But while the sun god begins his decline, the abundance of the goddess is in full swing. She has provided a vast bounty of crops for the harvest. The central focus of this festival is to reap the rewards of all that has been sown.

Once again, the day and night, light and dark are in perfect balance with one another. During the autumn equinox, Wiccans give thanks to the harvest and begin to store the crops that were harvested at Lammas. The darkness is coming, and the sun god and earth goddess have significantly aged. The second harvest allows followers to take a moment and breathe deeply releasing the rush and hustle of everyday life. This relaxation allows for time to reflect back on hard work and enjoy the fruits of our labor that have made this harvest possible.

After Mabon, the Wheel of the Year once again turns to Samhain. The beauty of the sabbats is that they reflect the natural course of the earth as it moves through our vast universe. The celebrations focus on the light and dark, paying homage to each and remembering how our lives also mirror that of the natural world around us. As humans, we too move through each of these cycles as does every living creature on earth. It is this aspect that is celebrated through each turn of the wheel and connects us together in Wicca.

While sabbats focus on the movement of the sun, esbats focus upon the waxing and waning of the moon during the thirteen lunar months. Sometimes known as the Second Wheel of the Year, esbats occur every four weeks when the moon is full.

The esbats focus solely on the triple goddess. It is her power, energy, and healing that radiates throughout the lunar light. Rituals under her divine light are performed for a variety of reasons including, but not limited to, healing, physic connection, personal goals, or spell work.

There are either 12 or 13 full moons during a calendar year. Every few years, a month will have two full moons within its dates. The second full moon in a month is called a Blue Moon. The Blue Moon is a special time when energy levels are increased, and the power of the goddess is believed to be even stronger.

There are no specific rituals for esbats. These celebrations are created for sole practitioners or covens based on their own workings and desires. During these rituals, Wiccans across the globe are looking up at the same celestial body in reverence. Practitioners in covens or solitaries know they are connected through their common bond of honoring the moon goddess.

Names of the Moons