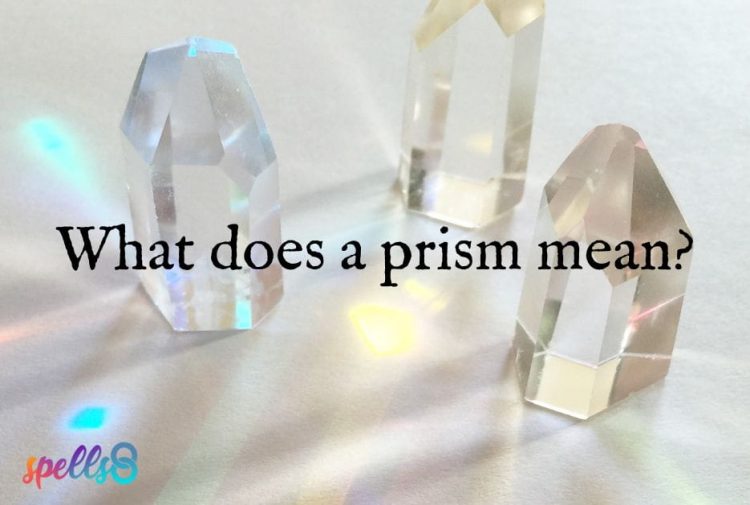 Imagine this: a beam of sunlight is shining through a window in your workspace and reaching a hanging prism. There’s a slight breeze, and the prism ebbs and flows in the wind, causing an array of multicolored lights to bounce off the walls. This dance creates a visually disarming sparkle. There’s a rainbow in your room!

Indeed this trippy light show catches your eye and feels like it penetrates you on an even deeper level. It’s not the rainbow in the sky we might chase to find the pot of gold, but we can touch and slide our hand through it, which is exciting.

A prism is a triangular and transparent crystal-like object with six sides and six angles. It refracts or bends light and is most often pyramid-shaped.

The remarkable thing about prisms is that they’re manufactured crystals that separate visible or white light into the seven hues of the rainbow. Usually, they’re made from glass, plastic, or fluorite.

What makes a prism so spiritually intriguing is that through it, we can see what’s beyond our immediate comprehension. Thus, the metaphor of a prism is ubiquitous in religion and spirituality.

It illustrates that there is so much more to consciousness than what we perceive in third-dimensional reality and gives us a glimpse into the light of the Divine. Some say that prisms contain light codes that will activate dormant centers and bring us back into celestial alignment.

The Science of a Prism

In the late 1600s, the multifaceted genius Isaac Newton theorized that rainbow light was already present in sunlight, that the colors within were pure and that the prism doesn’t add or subtract anything.

Before then, lay people believed that prisms were what colored the light. Yet the prevailing scientific view from Newton’s time was that sunlight must be perfect, as it came from God. This idea originated from Aristotle and the ancient Greek philosophers.

Through scientific experiments, Newton discovered that when white light passes through a prism, it bends due to it coming in at an angle. This bending causes the light to slow down and separate into seven hues. If the light beam were to come through the glass straight on, it would not have this bending rainbow effect.

Light slowing down on an angle makes it bend, which is known as refraction. Newton’s discovery helps us understand how color is formed. When light hits a prism, it spreads out into a rainbow spectrum.

Cross-culturally, a prism symbolizes radiant celestial light, our connection to the divine, and rainbows. Therefore, its dream meaning is personal and can be interpreted in various ways, stemming from this relationship to pure, God-Source light energy.

Depending on the context of the dream, rainbows are associated with harmony and hope and symbolize bridge connections to other dimensions. The following are other common dream associations of prisms and rainbows.

The use of prisms in Feng Shui, the ancient Chinese art of geomancy — arranging buildings, objects, and space to harmonize people with their environment — is standard practice.

The theory is that color has a significant impact on how one feels. Therefore, people can benefit from and achieve peace and prosperity by adjusting the energy and color of a space.

Introducing a prism and a spectrum of rainbow light into a space is said to positively influence one’s emotions and well-being. By hanging a prism in a room or garden, the dancing sunlight and rainbow colors charge the space with a unique energy. Some people claim to feel uplifted and experience feelings of joy and positivity in this setting.

According to Feng Shui, rainbows unite yin and yang energies and promote balance in any space. Consequently, prisms are used in this sense to promote an uninterrupted flow of auspicious energy to attract fortune and good health.

Adding rainbow colors to one’s view and perspective, and separating the hues based on one’s emotional needs, is also associated with the practice of color therapy, which has grown in popularity in psychology in recent years.

The Chakras and the Rainbow Prism Light

Rainbow light is associated with the chakras. Cosmic lifeforce energy, in the form of white light or prana, is said to flow through the body and split (like with a prism) into rainbow spectrum colors. Thus, it’s reasonable to say that our bodies hold rainbow energy.

Although each of the seven primary chakras correlates with a particular rainbow shade, it’s helpful to visualize them all working together through the full spectrum of color. These subtle energy centers start at the sacrum, where Kundalini energy is said to dwell.

Once Kundalini energy is awakened through meditation, pranayama (breathwork), creative visualization, or even spontaneously, it uncoils and rises to the crown of the head, activating all the chakras, and aligning the physical and astral body.

The colors associated with each chakra are:

This light spectrum is also associated with the Rainbow Body, a Buddhist third-person account of a supreme, enlightened person dissolving into rainbow light. This concept is similar to the dissolution of the physical body at death and attaining pure light.

There are many ways to incorporate prisms into your spiritual practice based on what rainbow light means to you. Are prisms themselves portals to other dimensions? Can they help us let go of negative vibrations and replace them with positive one? Do prisms represent conscious activity in the astral realm?

It’s up to you to explore and find out!