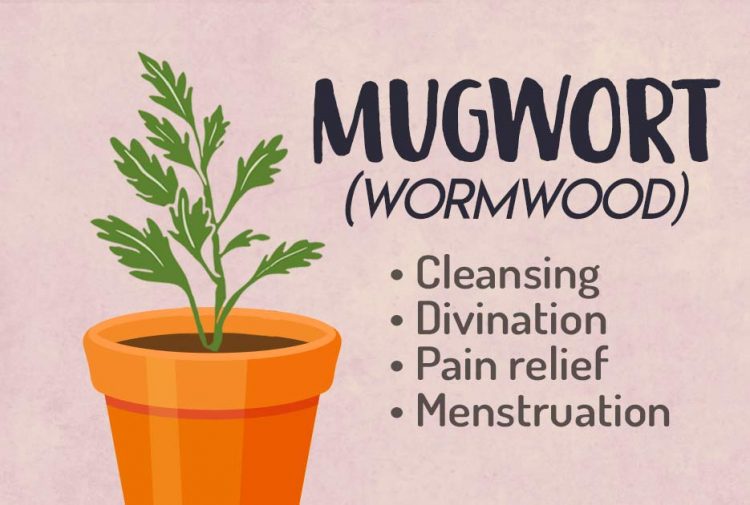 Also known as wormwood, mugwort has been used and revered by ancient civilizations. From ancient Greece, where it got its name — Artemisia vulgaris — from the Goddess Artemis (or Diana the Huntress in Rome), to Egypt, where worshipers of Isis would carry a twig of the bush in processions, and hang it on the front doors of homes for protective purposes.

This is a very powerful plant in sending away negative interferences. Mugwort oil can be added to any kind of protection spells. Burning its leaves creates a perfume that can have relaxing effects.

Mugwort is also used in divination. Stuffing a pillow with this herb and sleeping on it will produce prophetic dreams. An infusion of Mugwort (sweetened with honey) can be drunk before divination.

Uses of Mugwort / Wormwood in Witchcraft

Mugwort (Artemisia vulgaris) is frequently used in modern Pagan magickal rituals.  This easy-to-cultivate herb has a plethora of names including Wild Wormwood, Felon herb, St. John’s plant, Moxa, Naughty Man and Sailor’s Tobacco. Mugwort is native to Europe and Asia where it can grow to heights of up to six feet tall. It has a slight silver fuzz on the leaves and reddish or yellow flowers bloom in the summertime. While this member of the daisy family is thought to be a noxious weed in America, other cultures have revered its many health benefits.

Because of mugwort’s association with the moon, it is often considered magically feminine in nature. Mugwort is considered a sacred herb of Artemis, the Greek goddess of the moon, the hunt, and chastity. This connection is evident in its scientific name. It is one of the most popular herbs for ritual incense. It is also used for “smudging” which is when an herb is burned and walked around a ritual space to purify the area and the spellcaster before a magic spell is performed. In the modern shamanic tradition, mugwort is one of the nine sacred herbs. It is used at the beginning and end of rituals to sanctify the ritual space. To protect themselves from malevolent ghosts, Native American tribes would rub mugwort leaves on their bodies!

Some magical traditions associate this herb with divination and dreaming. Mugwort can make your dreams more vivid and many people use it to induce lucid dreaming. It also improves the ability to recall dreams and has been said to provide the user with divine visions. Many practitioners also use it to bring about prophecy and success in divination.

Moxibustion with mugwort has proven to be a successful treatment for arthritis. Moxibustion in an ancient Chinese practice where the leaves of the mugwort plant are formed into a short stick or cone and then burned over acupuncture points. This releases energy from the point and helps to stimulate blood circulation. Researchers found that when used on osteoarthritis patients, over half of the participants had improved joint function1.

Mugwort is an important herb in helping to treat issues regarding menses. It has most often been used with amenorrhea, delayed or absent menstruation. Mugwort is both a uterine tonic and emmenagogue. It stimulates blood flow to the pelvic area thus strengthening the uterus and promoting a healthy reproductive system.

Avoid using if pregnant or breast feeding. Avoid if allergic to any plants in the Asteraceae or Compositae family or the Artemisia genus. Can potentially cause an allergic reaction in people who are allergic to birch, celery, wild carrot, white mustard, honey, royal jelly, hazelnut, olive, latex, peach, kiwi, or sage.